The 2014 SPIE president, H. Philip Stahl, believes he was destined to be an optical engineer. Web-only bonus content.

Stahl has a BA in physics and math from Wittenberg University and earned MS and PhD degrees in optical science at University of Arizona.

SPIE Professional asked Stahl to discuss his career path and his interests in science. 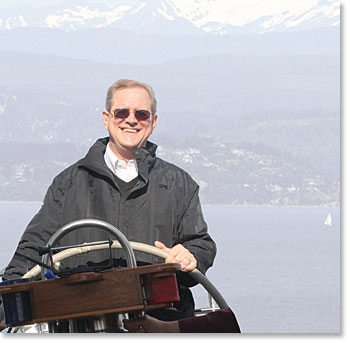 Tell us about where you grew up, your family, and your childhood hobbies and interests.

I grew up the oldest of three siblings on a pig farm outside the small town of Bellevue, Ohio, about halfway between Cleveland and Toledo and about seven miles south of Lake Erie. I had many chores – ranging from feeding the pigs to ‘topping’ grain bins. When not cleaning manure out of pig pens, I was either exploring the woods and meadows with my dog, excavating multi-level straw-bale castles in the barn, or reading hundreds of books at the local library.

In junior high school, I went to the library every day after school to do my homework. My childhood activities (which are still some of my favorite activities) were music, scouting (Boy Scouts of America), and science.

According to my mother, I was always interested in science and made my grandfather read aloud over and over again books about dinosaurs, stars, and planets.

The only scientist I knew was my Uncle Charlie who had a PhD from Case Western Reserve University and was involved with the development of the heart lung machine used for cardiopulmonary bypass surgery. It was not until I got to college, though, that I learned it was possible to actually have a career in science.

I was probably always destined to be an optical engineer.

In elementary and middle school, I was fascinated with photography and had a Brownie camera. In 6th grade, I read Einstein’s Theory of Special Relativity for a book report and tried to explain it to my father on our weekly car rides home from band practice. As a result, he took me out to the back fence one day and made me promise that I would never become a farmer.

In 9th grade, with help from my father, I tried – unsuccessfully – to build a laser for a science fair project.

I used gift money from my high-school graduation to buy a used Minolta XE-5 camera to take to college. I learned how to load and develop my own film and print my own pictures.

Until I got a summer job at Wright-Patterson Air Force Base (WP-AFB) between my junior and senior year at Wittenberg University, my goal in life was to be a high-school physics teacher. That summer job changed my life.

My life changed again just a few weeks into my senior year when a Wittenberg physics professor, M. Paul Hagelberg, learned during his summer job at the Naval Research Lab that there were two US graduate schools for optical engineering (at universities in Arizona and Rochester).

What led you to the field of optical metrology?

As a graduate student at the University of Arizona (UA) Optical Sciences Center, I had done well in the Fourier Optics class taught by Jack Gaskill (1995 SPIE president) but was struggling with Roland Shack’s optical design class and the radiometry course taught by William Wolfe (1989 SPIE president). I found quantum and the courses in electricity and magnetism to be just brute force mathematic drudgery.

I was seriously thinking about stopping with a master’s degree. Then I took two classes from Jim Wyant (1986 SPIE President) on Interference and Interferometry and Optical Testing, and I discovered my bliss.

I discovered mathematics that were elegant and concepts that were intuitively obvious. And, I found that I had an innate ability to do the hands-on lab skills. I switched paths to interferometric optical testing and never looked back.

How did you come to work at NASA?

The arc of my professional career is simple. First, I spent five years at UA discovering and learning the theoretical/academic underpinnings of interferometry, optical testing, and optical system design. Then I spent five years at Breault Research Organization designing, building, and writing the software to operate infrared and visible phase-measuring interferometers and scatterometers. This experience taught me how interferometers and phase-measuring analysis software worked.

Next, I spent four years teaching interferometry and optical testing at Rose-Hulman Institute of Technology (RHIT). The best way to learn and understand a topic is to teach it. My time at RHIT allowed me to consolidate and formalize my knowledge. Also, I discovered that I love students. I truly enjoy being around smart, inquisitive people. Advising and being responsible for the 15 members of the class of 1993 made me a better person.

Then I spent six years at Hughes/Raytheon Danbury Optical Systems using phase-measuring interferometers and other metrology tools to manage the manufacture of and perform the testing of optics such as the Spitzer Space Telescope secondary mirror and the four-meter, seven-segment Large Active Mirror Program (LAMP).

This practical application experience was invaluable. It is one thing to have a theoretical understanding of a subject. It is entirely different to apply that understanding to solve real-world problems. 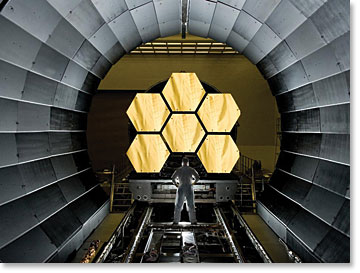 Finally in 1999, NASA offered me the opportunity to work on the Next Generation Space Telescope, which became the James Webb Space Telescope. They needed someone to lead the effort to develop the technology to manufacture and test the primary mirror segments. It was an opportunity I could not refuse.

Who has made an impact on your career success?

I am the product of numerous role models and mentors who set good examples and gave of themselves. In junior high, my science role model was an older boy in my Scout troop who had built his own telescope and converted an old silo into an observatory. If I had been successful in making my laser, we were going to use his telescope to bounce it off the moon. That boy is now Dr. Mark Wagner of the UA Steward Observatory.

My high-school physics teacher Mr. Meyers challenged me with extra experiments, encouraged me to study physics in college, and was a role model to emulate. I planned to become a high-school physics teacher and I even did a student-teaching practicum in his classroom. But that all changed when, thanks to the base commander at Wright-Patterson AFB (a colonel whose name I don’t even know) took a personal interest in me and arranged for me to have my first optics job working with Vince Chimelis at the optics branch of the WP-AFB Aeronautical Lab. It was Vince who first told me that I was doing a great job and hired me for the entire year.

Dr. Hagelberg at Wittenberg encouraged me to go to graduate school to study optics. He had been my waves instructor and thought I might have an aptitude for optics. Unlike several of my other professors, he thought I could be successful in grad school.

At Arizona, Dr. Fred Bartell went out of his way to convince me that I was PhD quality. And David Markle, Dick Babish, and Frits Zernike not only gave me my first optical engineering and testing summer job, but they told me that I was good and gave me the confidence to continue my studies.

Bob Parks and Achiem Leistner kept me sane as I worked to finish my PhD research. Glenn Boreman and Jim Harvey were great friends and sounding boards. And I have had three great supervisors who always placed the needs of employees above their own: Robert Harned, Victor Bennett, and W. Scott Smith.

Then there is SPIE. SPIE has been the village, the community in which I have come of age. SPIE is my professional family. SPIE is where I make and renew my personal and professional friendships.

For helping me become active in SPIE, credit goes to Sue Davis, the former director of SPIE meetings and exhibitions; Terry Montonye, a former technical director at SPIE; Kevin Harding, the 2007 SPIE president; and Bob Fischer, the 1984 SPIE president.

Finally, there is my wife, Karen. She is my emotional rock upon which the foundation of my professional career is built.

How did you first get involved with SPIE?

The first SPIE meeting I attended was San Diego in 1980 (the 25th Anniversary of the LASER meeting). Bob Shannon had secured a number of $125 travel grants from SPIE and lodging arrangements at the University of California, La Jolla. In exchange, we students worked as audio-visual assistants changing slide trays on projectors. It was a great experience.

Working the conference forced me pay attention to the presentations, and I saw my professors functioning in the SPIE community.

I have not missed a single San Diego meeting since 1980. And since joining NASA, I have attended every SPIE Astronomical Telescopes + Instrumentation meeting since 2000.

I felt at home with the combination of technical discourse and socialization that is SPIE.

During my undergraduate days at Wittenberg University, I had been the Society of Physics Students Chapter President for two years. Therefore, I wanted to jump immediately into SPIE. I started to pester my professors, advisers, employers, and anyone associated with SPIE to let me help organize a conference.

Of course they all refused. And, looking back, it was obvious why. I didn't have an independent network of colleagues from which to solicit papers.

In 1992, Kevin Harding took me under his wing for several cycles as co-chair of his Industrial Optical Sensing and Metrology Conference, and that's how I learned how to be a conference chair. Then in 1994, I co-chaired the Advanced Optical Manufacturing and Testing Conference. I ran that conference from 1994 until 2005.

Finally, I was humbled in 2012 when elected to the SPIE Presidential chain.

My only regret after 34 years of being an SPIE member is that I didn't buy a lifetime SPIE membership.

Hopefully, my son Mark will buy such a membership once he finishes his graduate studies and is no longer eligible for the student member discount.

Why do you continue to be active in SPIE?

Beyond the obvious reason that it is great for my professional career, the reason I do what I do for the SPIE community is because of the example established for me by those whom I respect.