To understand the dynamics of Salvador Dali’s great achievements in holography, which led to the n-dimensional moment of rock star Alice Cooper’s brain floating in a volumetric holographic space, hearken back to the 1940s when the idea of coherent interference came to be.

In 1947, Hungarian born scientist Dennis Gabor delivered a paper on the recording of three-dimensional space on a two-dimensional surface. Gabor’s invention and development of the holographic method earned him the 1971 Nobel Prize in Physics and the title ‘Father of Holography.’

Gabor had developed the idea one day while sitting on a tennis court, contemplating the recording of the interference of light in 3D space. As there were no lasers at that time, he proved that the concept worked by using a mercury arc lamp with a very short coherence length. The results showed, indeed, that the refined light from the arc had recorded a 3-mm-deep replication of a wavefront of coherent light.

Although this set the scientific community on fire, the first display hologram could not be made until after the first laser was demonstrated in 1960. Unlike the mercury arc, when the image was recorded with the laser, it created depths of up to a meter or more on the Z axis, depending on the coherence length of the laser.

In those early days, holographers were mainly interested in the technical aspects of holography such as recording small inanimate objects, creating head-up displays for aircraft, and nondestructive testing of parts.

In the late 1960s, our company, International Holographic Corp., in alliance with McDonnell Douglas, produced and marketed the first commercial holographic products from a 3D, artistic point of view. The holograms and their history can be seen here.

The possibilities for holography seemed endless. With each new product, we were closer to achieving our artistic goals. 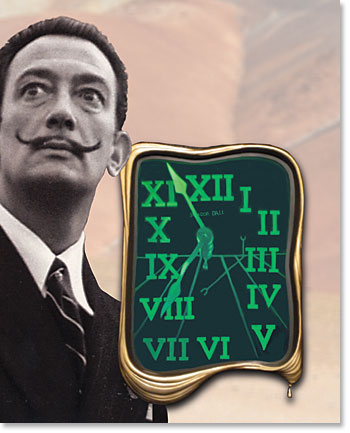 Yet we knew in order to introduce holography to the world as an art medium, we would need a well-known artist who could understand the technical aspects of holography. I had been fascinated with Salvador Dali since I was child. His obsession with finding and creating in other dimensions and his great understanding of three-dimensional symmetry and perspective on a flat plane made him the perfect choice.

I was living in New York in 1971 when I learned that Dali was staying at the St. Regis Hotel. I decided to pick up the phone and give him a call. At the last minute, I handed the phone to my friend George Besch, thinking my South African accent might be hard for the great surrealistic artist to understand.

Never in my wildest dreams did I think we would be speaking to the legendary Dali himself, and the very next day we were actually sitting in his suite, talking to him about holography.

Dali was thrilled with the notion of working with a medium which gave him the ability to create beyond the confines of linear space, and his hotel suite became our office. Over the next five years, we met often to discuss the many ideas he wanted to explore. From 1971 to 1976, Dali and I collaborated to produce seven holographic works of art, which were to become some of the most important art holograms of the 20th century.

The last one, the Melting Clock hologram, was conceived in 1975 but not constructed until 2003 when LED technology made the playback system more practical.

Technology for art holograms was limited in the 1970s

When the Dali holograms were made, holography was in its infancy and had many limitations and challenges. The details of the making of all the Dali holograms can be found in the 2012 book, Dali in Holographic Space, which I wrote with Linda Lissack.

Dali’s contributions to art holography were monumental. His talents and forward-thinking mind were so far ahead of the technology that the artwork he applied in creating the holograms would be exactly the same today. The Dali holographic masters can be compared to currency plates; they transcend time and they never change. What does change, with evolving technology, is the playback system.

In the 1960s and ’70s, and even still today, bulky, hot, expensive lasers, mercury-arc, and tungsten halogen lights have been used to play back holograms. Unfortunately, none of these systems work well in the home, making it difficult to display a hologram in an artistically inspired manner.

With the invention of “super-bright” LEDs, however, art display holograms in the home may be in our future.

A super-bright LED is a good point-source light for holography. These LEDs are available in various colors or white light, use very little power, and have a 1-inch Edison screw-in base, similar to the average light bulb for the home. LEDs run cool and can have a life of more than 30,000 hours.

As we evolve into a digital world, with holographic printers, I often wonder what Dali, who died in 1989, would have done with the new technology. Can you imagine Dali sitting down to a three-dimensional CAD-type program to paint a 3D picture?

As he once said, “Art is only limited by one’s imagination.”

It was a humbling experience working with such a great mind and artist as Dali. I have spent my life fulfilling the promises I made to him. This was to create and produce his holographic images with the evolving technology, as he envisioned them. 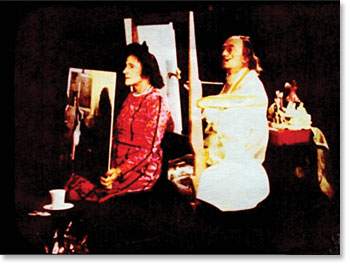 Dali Painting Gala is a 360-degree auto holographic stereogram. It is an intricate blending of images, creating a multitude of changing angles between the many objects and perceived symbolic metaphors. Conceived in 1976, the 10- by 18-inch diameter piece is a white light “Benton” transmission rainbow hologram. 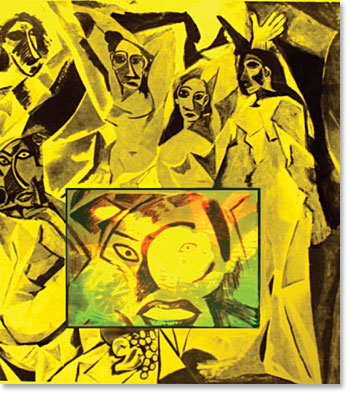 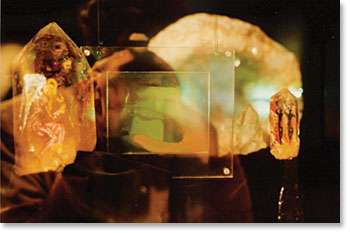 The Crystal Grotto, a gateway to heaven, is a 3D holographic collage. It is a shrine to Dali’s spiritual belief, a place of magic where the particles of the universe come together, creating a sacred, holy place. Conceived in 1971 and commissioned by Eleanor and Reynolds Morris, the Crystal Grotto is a 4- by 5-inch transmission hologram. 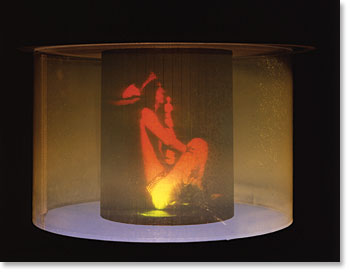 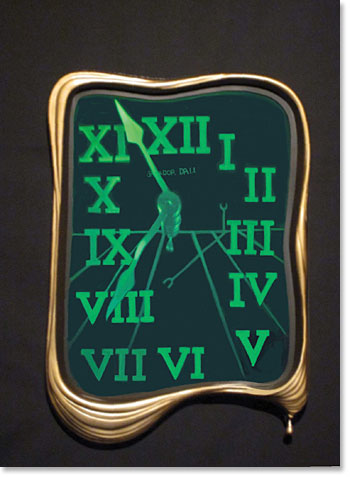 Dali was a true visionary, creating holograms that would transcend time. The Melting Clock was a natural progression of Dali’s work in holography as well as an ongoing exploration of time and space. Conceived in 1976 and produced in 2003, this 18- by 24-inch silver-halide reflection hologram is a concept in recycled molecules of a moment in time conceived in the past. Dali’s Melting Clock hologram could not be constructed in his lifetime because the lighting system used for playback was too hot. The project was reproduced with 21st century technology after his death, in homage to his genius and ability to see beyond the limits of time. He entrusted the blueprint to me before he died in 1989 to complete the project when the technology to create it was available. I was finally able to honor my promise to him with the assistance of a modern holographic lab, Laser Reflections, and a pulsed green ytterbium fiber laser. 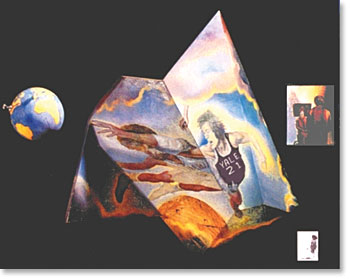 In the Polyhedron hologram, Dali’s objective was to create a multivolume of space. This was accomplished by combining four elements. With the polyhedron’s geometric surfaces, Dali painted basketball players in the process of becoming angels. It also includes a 3-inch sphere of the planet Earth, a portrait of Dali painting his wife and muse Gala in a mirror, and a photograph of Dali as a child. Once Dali was satisfied with the artwork, it was taken to the lab to be recorded. Conceived in 1972, this 18- by 24-inch transmission hologram is in a private collection. 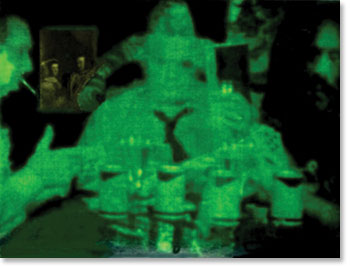 Holos! Holos! Velázquez! Gabor! is a complex concept hologram conceived in 1972 showing two completely different moments in time, with two separate realities existing in the same space. To create the hologram, Dali took fragments from two pre-existing works. The final piece, an 18- by 24-inch transmission hologram, would consist of two plates. The first was Las Meninas, an oil painting by Diego Velazquez. The second was a pre-existing hologram of three modern-day men seated at their weekly poker game. The displaying of this hologram required a 150mW green laser, placed 12 to 15 feet behind the plates at a 45-degree angle. 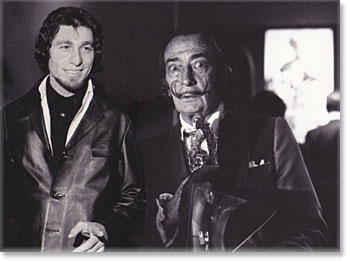 –Selwyn Lissack (above, left) is a 3D artist, jazz musician, and entrepreneur who co-founded the New York School of Holography and the Holographic Design Development Co., which later became International Holographic Corp. In 1981, he became president of Laserworks. He has been awarded several patents for laser-scanning technology. The Dali Theatre-Museum in Figueres (Spain) and the Dali Museum in St. Petersburg, FL (USA), maintain collections of various Dali holograms, as do private collectors.

Dali in Holographic Space covers the collaboration in the 1970s by Salvador Dali and South African artist Selwyn Lissack to use laser light as paint brush and canvas in order to dabble in the third and fourth dimensions.

Holography “would prove to be the most unique and important artistic medium in which to express Dali’s three-dimensional ideas,” Lissack says.

“No longer confined by the limitation of a two-dimensional surface, holography presented the opportunity for Dali to symbolically recreate his views and perception of other dimensions within our own reality of space.” 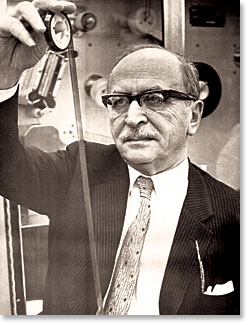 SPIE has presented the Dennis Gabor Award for outstanding accomplishments in diffractive wavefront technologies each year since 1983. The award honors the 1971 Nobel laureate and his invention and development of the holographic method.

SPIE Fellow David J. Brady of Duke University (USA) received the 2013 award for his development of compressive holographic and tomographic imaging systems and for advances in the physical and information science of imaging and spectroscopy.

Nominations for an SPIE Award may be made through 1 October of any given year and are considered active for three years from the submission date.

The November 2014 issue of the SPIE journal Optical Engineering will have a special section on new techniques and applications of holography.

Manuscripts for “Practical Holography: New Procedures, Materials and Applications” are due 1 February.

A holography technical event, poster session, and a conference on practical holography will be part of OPTO at SPIE Photonics West in February.