The infrared-system community, particularly in the United States, is not that large. After the defense drawdown in the 1980s, there remained very few infrared-system experts. Many were optical engineers, physicists, or like myself, electrical engineers who specialized in electro-optics. It became such a small community that those of us who stuck with it knew each other pretty well.

In the 1980s, it seemed that the pace of IR technology was fairly rapid with transition from first-generation forward-looking infrared (FLIR) line scanners to second-generation FLIR time-delay-integrated scanned detectors to two-dimensional staring array systems. The optics were all single f-number systems with traditional IR materials, but progress was a new aperture size, a more narrow field of view (NFOV), and a larger, narrow- to wide-field switch ratio.

I used to think that the technology maturation rate was too much to keep up with back then. Now, things are crazy!

It is the most exciting time ever to be an infrared-systems engineer. There are multiple breakthroughs every year and the progress is staggering. I want to provide a quick sampling of some of the significant developments in components and IR systems over the past five years or so. Many of these IR technologies are associated with military systems, but some imaging systems are breaking into commercial markets.

Persistent intelligence, surveillance, and reconnaissance (PISR) systems are the newest IR systems in military inventory. These systems started out approximately six to 10 years ago in the visible spectrum. They were used on manned aircraft flying circles in the sky above small towns in war zones for periods as long as 12 straight hours.

The idea was that after an explosion from an improvised explosive device, suicide bomber, or vehicle, the picture sequence could be rewound so forensics investigators could identify the people and vehicles involved.

Since PISR operations are better accomplished at night, when devices can be placed and operated more covertly, developers came up with infrared PISR systems. These systems can be placed on moving or stationary unmanned platforms, with an operator in a remote location specifying ground sample distance, area coverage (km2), and frame rate to determine system performance.

Military labs in many countries are pursuing systems in this area.

The development of dual-band imagers has provided significant benefits in defense applications, allowing an operator to see in both midwave infrared (MWIR, 3 to 5 µm) and longwave infrared (LWIR, 8 to 12 µm) with the same focal plane. DRS Technologies, Raytheon, Teledyne, Lockheed Martin, Sofradir, and FGAN-FOM, the Research Institute for Optronics and Pattern Recognition, are some of the organizations that have produced focal planes to do this.

The optics associated with dual-band imagers are complicated and expensive. And while some scientists and engineers argue over the usefulness of simultaneous imaging with combined bands, the benefit of having access to both MWIR and LWIR for a given aperture size is clear.

Most of the world’s armies use LWIR for “dirty battlefield” conditions and most of the world’s aviation and maritime communities use MWIR due to smaller wavelength, higher standoff range, and more humid atmospheres. The clear benefit of having MWIR for ground applications is that an MWIR camera with given aperture can see about 2.5 times as far as an LWIR imager (due to diffraction limits) under “good” conditions.

However, most armies will not sacrifice LWIR for MWIR because of the dirty-battlefield conditions of hot targets, burning objects, smoke, obscurants, and even cold weather, where MWIR is photon-starved.

A good example of the dirty-battlefield power of LWIR is burning barrels as shown in figure 2. Hot targets shift left on Planck’s curve with huge energy in the MWIR that blooms the detector and provides veiling glare, whereas the LWIR image is still functional with burning barrels in the field of view.

Also, since there are many more photons in the LWIR band with terrestrial targets and backgrounds, integration times are much shorter, and moving around fast does not blur your image. So having both bands in a single camera can be of significant benefit. The US Army Night Vision and Electronics Sensors Directorate (NVESD) is a primary leader in dual-band IR technology.

Small IR detectors can provide very different system characteristics than classically designed IR systems. First, they have long-range target-identification capabilities at low f-numbers. Most IR engineers are accustomed to long-range sensors having higher f-numbers, but that’s primarily because we have been saddled with larger detectors for so many years.

The visible-imager community has been doing long-range imaging with low f-numbers for a long time. A high-density array of small detectors can offer both long-range identification and wide field of view with all-electronic zoom.

SPIE Fellow Nibir Dhar of the US Defense Advanced Research Projects Agency (DARPA) has led the charge on small detector systems with a number of successes with detectors scaled to a pitch of 5 to 8 µm. Figure 3 (below) shows a camera and a camera image with five-µm-pitch detectors that were developed as part of DARPA’s Large Aperture Marine Basic Data Array (LAMBDA) program. DRS Technologies designed and built the camera with a mercury-cadmium-telluride focal-plane array in the MWIR. 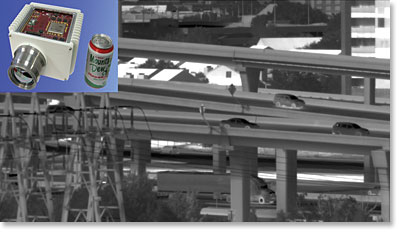 A relatively new area of infrared systems is panoramic IR systems, designed to image 360 degrees around an area. In the future, such systems could range from cheaper, low-resolution systems that see around a vehicle or small boat to midrange systems for towers and facility surveillance. High-resolution systems are very expensive and are used for protection of high-value platforms such as ships and submarines.

Figure 4 (above) is a panoramic camera that Jim Waterman at the U.S. Naval Research Lab (NRL) developed. Remote Reality built the “doughnut” lens that projects the panoramic image on a single focal plane, and L-3 Cincinnati Electronics built the 2ooo-by-2000-pixel InSb focal plane that images the entire panorama and can give a virtual tour of the area.

The doughnut image has to be “de-warped” in real time to provide a cylinder-coordinate image. This particular camera provides around 5000 pixels on horizon in the MWIR, which is the workhorse IR band in naval applications due to the humid environments.

Frame rate is also important with panoramic systems. While these doughnut lenses can provide high frame rates, scanned systems that rotate to make an image are usually slower. If the frame rate is too slow, the camera may not meet target-detection and tracking requirements or mobility requirements.

One breakthrough this past year that will definitely have an impact on infrared systems is the lead selenide (PbSe) detector that Kenton Green and Sung-Shik Yoo at Northrop Grumman developed. They have been developing low-cost PbSe detectors for some time for threat-warning systems aboard aircraft to defend against man-portable air-defense systems (MANPADS) and other anti-aircraft weapons.

The focal planes on these detectors are PbSe-deposited on silicon readouts, which make them very inexpensive. The remarkable aspect of these MWIR detectors are that they are non-cryogenically cooled with two thermoelectric coolers.

Sensitivities are now 30 milliKelvin with an f/1 optic and a 2.5-millisecond integration time, operating at 230 Kelvin. The arrays are 320 by 240 pixels with 60 µm pixels and 99.6 reproducibility.

Many of us in IR-systems engineering never thought we would see the day when non-cryogenically cooled photon detectors would have great sensitivity. The applications of these detectors not only include threat-warning and hostile-fire indication, but they could make a difference in high-speed industrial inspection, driving, rifle sights, etc.

The niche they hold above cheap microbolometers is derived from their good sensitivity and high speed.

Green, Yoo, and colleague Christopher Kauffman are authors of a paper on these sensors, “Lead salt TE-cooled imaging sensor development,” to be presented at SPIE DSS in Baltimore in May. I encourage attendance at this session. I would be remiss if I did not also mention the good work in this area at New Infrared Technologies in Madrid.

It’s not easy to say, but this technology will be critical the day that we start seeing rogue MANPADS against commercial aircraft.

Figure 6. FLAT optics in the infrared.

In terms of optical components that improve IR systems, one really interesting concept gaining traction is the flat-lens approach to optics. DARPA funded Ravi Athale’s original idea, and the project made great progress with a collaborative group that included researchers at University of California, San Diego (UCSD). The original concept looked like a hockey puck (top in figure 6) where light entered the disk around the edges, bounced around inside the puck, and came out the other side in focus. The reflective surfaces provided optical power, and an image was formed not too far from the back of the disk.

Advantages of this approach are smaller size, lighter weight, and better functionality of the detector. The disadvantage is reduced modulation-transfer function and light collection due to the obscuration. However, it is a great technology when small size, weight, and power are needed.

Joe Ford at UCSD says the infrared version has “graduated” from UCSD. Philip Perconti, Jay Vizgaitis, and Colin Reese, of NVESD, have received awards for implementing this technology in lightweight systems. A paper presented at SPIE DSS in 2010 describes this approach and shows how the IR version was implemented using a microbolometer detector array. (See the middle and bottom images in figure 6).

Let’s switch gears to the commercial side now. There is a revolution in microbolometers today as several companies are and have been developing (some with the help of DARPA and Dhar) wafer-level packaging of microbolometer arrays.

The technology involves placing a window with a vacuum over an entire wafer of microbolometer arrays. Then the array and window are sliced and diced with the window and vacuum intact.

Now, I realize I have oversimplified the process, but you can probably understand its impact.

In terms of price, the bottom is going to drop out of the microbolometer market. Where microbolometer arrays have come down from tens of thousands to thousands of dollars in the past three or four years, we will see arrays for hundreds of dollars in 2014. I would not be surprised to see arrays sell for less than $100 next year and be even cheaper for small-format arrays.

While microbolometers have been in the thermography, automotive, and other commercial markets for a few years, the cheap arrays will allow further commercialization of thermal imaging. 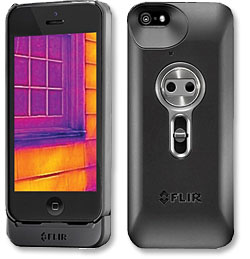 A recent example is FLIR Systems’ FLIR ONE personal thermal imager for smartphones, released in January. The smartphone system costs $350 and has a protective case that covers a visible camera and a microbolometer camera that are fused and presented on the smartphone screen.

The small thermal camera in the case is a very low-cost microbolometer-based core, the Lepton. The Lepton is an 80-by-60-pixel array with 17-µm pitch detectors. The response band is 8 to 12 µm and the core has a lens with a 50-degree horizontal field of view.

With wafer-level packaging and even wafer-level camera fabrication, we are going to see quite a bit more commercialization of this type of IR-system.

Who can keep up anymore?

It is an exciting time in IR systems and progress will only accelerate. In mentioning new IR components and systems associated with military and commercial systems, I have only scratched the surface.

I only provided some examples. I can’t keep up anymore!

–SPIE Fellow Ronald G. Driggers is CEO and cofounder of St. Johns Optical Systems, editor-in-chief of Optical Engineering, and a member of the SPIE Board of Directors. He has previously worked at the US Naval and Army Research Labs, including as superintendent of the Naval Lab’s Optical Sciences Division. The author of four books on IR and electro-optics systems, he has a PhD in electrical engineering from University of Memphis (USA).

Read about IR sensors for detecting asteroids and other sensor innovations in this issue of SPIE Professional.