The SPIE Awards Committee has announced the 2014 recipients of the Society's annual awards.

Since 1959, SPIE has honored the best in optics and photonics for their significant achievements and contributions in advancing the science of light.

SPIE Fellow Naomi Halas, director of the Rice Quantum Institute and founding director of the Laboratory for Nanophotonics at Rice University (USA), has received the 2014 SPIE Biophotonics Technology Innovator Award.

The award recognizes Halas for her invention of biocompatible nanoparticles and their innovative applications in imaging, diagnostics, and photothermal cancer therapy.

Halas is the Stanley C. Moore Professor of Electrical and Computer Engineering and professor of biomedical engineering, chemistry, physics, and astronomy at Rice, where “nanorice” was invented in 2006. Nanorice is similar in form to the nanoshell, a spherical nanoparticle Halas invented in 1998.

The nanosystems have been used as therapeutic agents with various potential payload delivery opportunities, and specifically as a local photothermal necrosis agent for tumors. The development of the core-shell plasmonic nanoparticle has allowed the use of a single particle to concentrate optical electromagnetic fields, a process that normally requires complex structures or aggregates of two or more particles. 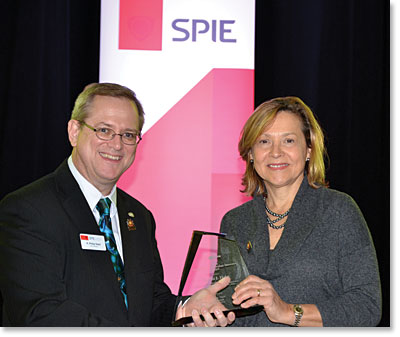 SPIE member Brian C. Wilson of the Ontario Cancer Institute (Canada) is the 2014 recipient of the SPIE Britton Chance Biomedical Optics Award. Wilson received the award in recognition of 30 years of contributions to biomedical optics.

Wilson, who will accept the award at SPIE Photonics Europe in Brussels in April, performed pioneering work in photodynamic therapy (PDT). His contributions include the novel concepts of PDT beacons, metronomic PDT, and nanotechnology-enabled PDT as well as unique technology development and clinical trials in the brain, prostate, and metastatic bone lesions.

In addition to innovative work in the gastrointestinal tract, these platforms are now being extended to detection and differential diagnosis of lung and head and neck cancers, including the development of cancer-specific targeting contrast agents to enhance efficacy.

The Britton Chance Biomedical Optics Award is presented annually in recognition of outstanding lifetime contributions to the field of biomedical optics through the development of innovative, high- impact technologies. The award honors pioneering contributions to optical methods and devices that have facilitated advancements in biology or medicine. .

The 11th Frits Zernike Award for advances in optical microlithography was presented to Mordechai Rothschild of MIT Lincoln Lab (USA) at SPIE Advanced Lithography in February.

Rothschild’s instrumental work in the field includes leading programs that have enabled the advancement of nanolithography in the deep-UV (248nm and 193nm) and the vacuum-UV (157nm and 121nm). He directed sub-micron technology and nanoscale technologies groups at Lincoln Lab that pioneered the use of much of the lithography materials and systems used today for excimer-laser technology. The other recipients of SPIE awards for 2014 are:

Nominations for an SPIE Award may be made through 1 October and are considered active for three years from the submission date.