Optical sensors are playing undreamed-of roles in industry and research.

From Singapore to San Jose, optical sensors are playing undreamed-of roles in industry and research. They monitor bridges from the inside. Spot storms from space. Look into at-risk cells. But hang on. They’re even reshaping sensor science.

Up close, personal sensors such as a child’s “mood ring” can assess your emotions. A sugar-cube size sensor in a football or boxing helmet can measure brain waves, looking for signs of trauma. Sensors might be in your clothes, in your eyeglasses.

All optical sensors, like the one in a cellphone camera, turn light into measurable energy. A sensor surface, about half your thumbnail in size, has millions of silicon semiconductors that respond to light as pixels, each perhaps three microns across. The sensor’s optics form it all into an image that can be displayed or stored.

Sensor innovators are using many optical technologies for a variety of applications to create the current boom in sensors.

Some sensors produce free electrons when light strikes and are called photoemissive. In others, conductivity changes are measured – these are photoconductive sensors. Yet others turn light into a measurable voltage, as a photovoltaic panel would.

Analysis by humans or computers is often the key. New software can transform sensor data into advice to act on quickly.

A major virtue of optical technology is that you don’t need to touch anything to make a measurement as the light travels out and back.

“With laser ultrasound evaluation, you can easily look for cracks or other problem in car doors or airplane wings,” said Robert Lieberman, president of Intelligent Optical Systems (IOS) and vice president of SPIE. “You just zap it with a laser.”

With pollution monitoring, the breakthroughs have paired small semiconductor lasers with semiconductor chips that emit light at exactly the right wavelength to monitor one specific chemical, such as methane or acetone.

“That’s going to wind up being very valuable,” Lieberman said.

The applications below are a few favorites of sensor innovators. In every case, there are many more applications for each technology.

In Singapore, Wavelength Technology and the Singapore Institute of Manufacturing Technologies (SIMTech) have teamed up on dedicated infrared-sensor systems. This collaboration has resulted in development of IR ellipsometry and laser-calorimetry tools that are focused on advanced optics characterization. 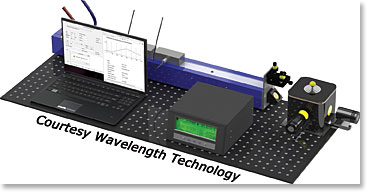 Wavelength Technology is also looking into new areas where IR optics can be applied. One such idea is to combine the flexibility of fiber lasers and advanced IR/thermal sensors or sensor arrays for making hand-held inspection tools for nondestructive testing in aerospace, marine, and other industries.

Researchers envision a system where a fiber laser plays the role of a heat source with controllable input power, shape, and temporal characteristics. Thermal response is detected by an IR sensor, and a variety of signatures can help identify defective or abnormal regions by monitoring heat distribution in the region surrounding the laser spot.

For example, in the vicinity of a crack, the lateral heat pattern will be affected, while in the presence of corrosion under insulation, the time response of the surface temperature is used as a defect signature.

“It gives the dermatologist the ability to scan, say, 300 marks worthy of interest and make a preliminary determination whether there’s reason for any concern about two of them,” Abrams said.

A new sensor from California-based BaySpec has features to help monitor a conveyor belt in food inspection or the environment from a flying drone. The OCI-1000 and OCI-2000, two pocket-sized hyperspectral imagers, integrate the spectral-dispersing element on an image sensor at the level of the chip itself.

“This eliminates the need for expensive, bulky, and complex optics that are used on traditional hyperspectral imaging systems,” said Owen Wu, an applications scientist at BaySpec. The battery-powered system weighs less than half a pound. The advanced OCI-2000 hyperspectral “snapshot” imaging sensor simultaneously disperses 2D images into multiple spectral bands.

“With just a simple snapshot like a conventional camera, the imager produces multispectral-image data cubes instantly,” Wu said. Such multispectral imaging at video rates can play roles in forensics and point-of-care diagnostics.

Nanosensors can probe inside a cell

At IOS, Lieberman predicts that metamaterial cloaking, which creates invisibility for certain molecules, will open doors to new medical devices.

“You will be able to buy hardware apps that you plug into a cellphone to let you make important health or pollution measurements or provide point-of-care medical testing. Sounds like pie in the sky, but it’s on the way,” Lieberman said.

IOS labs are working with neuroscientists at University of California, Los Angeles on a submicron-scale nanosensor that can investigate what’s going on inside a cell. The probe, clearly smaller than a cell, uses a single, very finely tapered optical fiber to make up to six different chemical measurements inside a living cell.

“You can tell how healthy the cell is. You can determine its oxygen use,” Lieberman said. “We can learn how neurons talk to one another.”

Sensors are also important for monitoring highway and building infrastructure. Bridge rust can be costly to repair. One of PD-LD’s products can detect corrosion early inside a bridge, inch by inch.

PD-LD placed tiny sensors on the rebar in the concrete for the Riverside-Delanco Bridge, in New Jersey near Philadelphia, during construction of a new deck. The sensors are watching for signs of corrosion.

“Instead of waiting for a huge pothole and having to repave the whole deck, we can know an exact spot to repair,” said Abrams of PD-LD. “We’d have to close the bridge for just a few hours.” 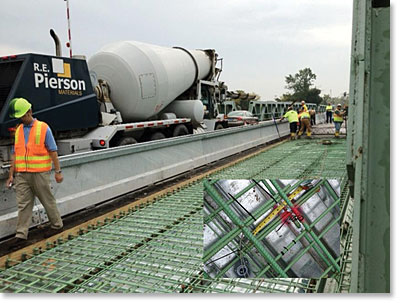 On the laser side of sensing, SPIE member Tim Day, CEO and cofounder of Daylight Solutions, says Daylight’s broadly tunable MIRcat, has uses from atmospheric monitoring to nanoscale imaging.

“It does it all, from one box,” Day said, “and there’s very good stuff in that box. It’s the only laser of its type with continuous wave (CW) output, for apps where you can’t use pulsed light,” Day said.

Laser sensors can detect pollutants such as nitrogen oxide (NOx), sulfur oxide (SOx), ozone, and methane; exhaled nitric oxide (NO), a biomarker for asthma; and glucose, the key analyte in diabetes.

Nerve agents such as sarin and VX are detectable in the mid-IR, as are many explosives, including TNT and TATP.

These molecules absorb light at mid-infrared wavelengths (~3-20µm), and each molecule exhibits a unique spectral fingerprint within this region. This has resulted in an explosion of activity using mid-IR laser light for the sensitive detection and imaging of a wide range of molecules in numerous applications, Day said.

Twenty years after the quantum cascade laser (QCL) was invented at Bell Labs, the MIRcat has found homes from industry to cancer screening to scientific nanoscale research.

Stray light may contribute to a wrong medical diagnosis when doctors use a noninvasive optics tool to look inside tissue.

Hyperspectral imaging can provide lesion detection, find retinal disease, and observe blood as it flows, but the imager’s optical components that divide the broadband radiation into its spectral components are potential sources of stray light.

Mechanical baffles and absorbent black coatings within the optics housing of a sensor will minimize the effects of stray light. Acktar’s coatings offer a reflectance of <1% from ultraviolet to long IR wavelengths, zero outgassing, and zero fluorescence.

Security scanning of liquids carried by air passengers can be a headache. Cobalt Lighting Systems, based in England, has developed a product called INSIGHT100 that uses Raman-based sensors to scan liquids in bottles for explosives. It can even analyze a liquid inside an opaque bottle.

The European Union required such screening to begin in 2014. Cobalt and a partner in France, Hi-Tech Detection Systems, are installing INSIGHT100 systems in Paris airports.

If a police team spots a white substance spilled in a car or airport, they may need a quick assessment of whether it’s detergent or an illegal, controlled substance. A new PD-LD product, called SERDS, for shifted excitation Raman differential spectroscopy, represents a significant development in the capabilities of Raman spectroscopy analysis, PD-LD says.

It would let police assess a sample on the spot. It takes readings from two lasers and identifies the substance by subtracting one reading from other.

“It takes Raman spectroscopy out of the huge hospital setting and onto the streets,” Abrams said. “There’s no risk of false arrest or of letting a criminal go free.”

Narcotic sensors that use Raman spectroscopy can detect traditional illegal drugs such as cocaine, methamphetamine and heroin as well as synthetic drugs and benign cutting agents. US-based Thermo Fisher Scientific has developed the TruNarc™ analyzer, which uses a Raman-based sensor for that purpose.

“The criminal element isn’t resting, so neither are we,” said Trey Sieger, safety and security market leader for Thermo Scientific portable analytical instruments.

To address technical challenges inherent to Raman spectroscopy, the company has developed a kit based on surface-enhanced Raman spectroscopy (SERS) that enables screening of heroin, which is often too fluorescent for Raman analysis, as well as synthetic cannabinoids and low-dose prescription pills.

At Pranalytica in the US, SPIE Fellow Kumar Patel and his team are working on a portable QCL sensing package that can be taken to a fire scene to detect toxic chemicals or be deployed in military, law enforcement, or homeland security applications to detect explosives and chemical-warfare agents.

Using eye-safe, long-wave laser beams in the near-IR range, it will check for dangerous substances burning 50 to 200 meters away. The package will measure gas concentrations in parts per trillion, using wavelengths of 7 to 10 µm, Patel said.

The laser source must be small and power-efficient, run on batteries for two to four hours, and be light enough to carry or place on a small aerial platform to monitor large areas.

“No one has reached the two-pound payload yet,” said Patel, who invented the CO2 laser. “We are at 20 pounds. We are trying for the next step, four or five pounds, and that will be a significant breakthrough for a measurement system. From 20 pounds to two pounds won’t be easy, but that’s my job.”

Long sensors are the fiber-optic cable itself

IOS is developing environmental sensors hundreds of meters long, using the fiber-optic cable itself as the sensor.

The approach, known as Distributed Intrinsic Chemical Agent Sensing and Transmission (DICAST), can look for leakage of toxic compounds such as carbon dioxide or methane.

“Instead of using point detectors, you just spool out a cable, and that is the sensor element,” Lieberman said.

With sensitive detection along its entire length, it could one day protect the perimeter of large areas like military installations, sports arenas, or shopping centers.

Why an optical sensor boom now?

“Things are getting more compact, and computing power is more cost effective,” added Abrams. Many of the hot new items have been in labs for decades, he said. “Now they are finding homes in the commercial world.”

In commercial applications, “We’ve only scratched the surface,” Lieberman said. “In new technology for remote environmental monitoring, or spy satellites, or night vision, the thing that gives the advantage is the optical sensor.”

Eglash agreed, saying, “In the near future, billions of networked sensors will query the physical world and permit us to ask and answer questions as varied as: Where is the closest place to buy Coca-Cola? What are my personal hydration and nutrition needs right now? Is this water pure? How will this approaching storm impact energy and transportation?”

–Ford Burkhart is a science and technology writer based in the US.

New sensing symposium debuts at SPIE DSS in May

“Fiber-optic sensing is migrating from high-value military applications to large-scale deployment in oil fields and optical biosensors are moving beyond medical applications into agriculture and food safety. Plasmonic- and metamaterial-based sensors are no longer theoretical possibilities, but are being fabricated,” he said.