Throughout the first week of February, advances were reported on new technologies for noninvasive medical treatments, ultrafast lasers to enable more efficient manufacturing applications, silicon photonics to meet the escalating demand for data transfer, bioinspired optical systems for sensors to monitor changes within the body, and hundreds of other topics for the international laser and photonics community.

A technology-transfer information session and startup accelerator forum providing ideas for those looking to commercialize new optics and photonics technologies were among several new programs for business executives. These sessions added even more energy to established events such as the Prism Awards for Photonics Innovation and the SPIE Startup Challenge that celebrate innovative new products and nurture startups.

Proceedings from the technical conferences are available from the SPIE Digital Library, and daily news reports can be found at spie.org/pwnews.

In addition, SPIE.TV captured many of the multimedia presentations from SPIE Photonics West plenary sessions and BiOS Hot Topics. These are posted online at spie.org/PW14TV.

Researchers celebrated several laser milestones during the week, including the 45th anniversary of Robert Alfano’s discovery of supercontinuum generation and applications and the 25th anniversary of the BiOS conference on Optical Interactions with Tissue and Cells. 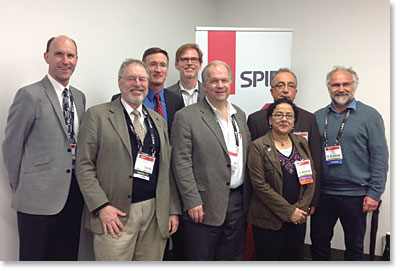 Duco Jansen, far left, says about 278 years’ worth of laser-tissue-interaction experience is represented in this photo of some of the participants at a 25-year-anniversary session at SPIE Photonics West.

And for a real-life example of a promising laser therapy for cancer, a melanoma patient who underwent a new laser immunotherapy procedure attended his physician’s presentation at BiOS.

The physician, Mark Naylor, of Dermatology Associates of San Antonio (USA), and SPIE Fellow Wei R. Chen, a professor at University of Central Oklahoma (USA) and co-inventor of laser immunotherapy, have developed a new therapy that uses a laser to damage, but not destroy, a melanoma tumor.

While melanomas on the skin are not typically what kill a patient with the disease, at more advanced stages, the cancer metastasizes throughout the body. These are the tumors that make the disease’s survival rate very low.

Lasers and the immune system response

Chen and Naylor’s approach takes advantage of the body’s defense mechanisms to respond to the laser-damaged tumor by generating an immune response specific to that tumor. The immune system then finds and destroys — or at least shrinks — other instances of the cancer that have spread around the body.

This is showing encouraging signs of increasing survival rates and possibly changing melanoma from a fatal to a chronic disease — one that could be managed with recurring treatments. 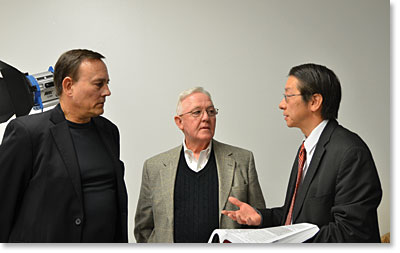 A big advantage of this approach is that it does not require chemotherapy, so the patient is able to have a normal life, with very few side effects from the treatment.

Rex Tullis, one of the patients that Naylor has treated, was living proof. Diagnosed with advanced melanoma in 2011, Tullis has already lived well beyond the six-month prognosis he received after the cancer spread to his lungs.

“I was looking for something that would give me better quality of life and potentially more time,” Tullis said. “I feel like I’m part of a team, and we’re in this battle together.”

Chen and Naylor discussed the trials underway in the Bahamas, Peru, and in the United States, and the promise the treatment has for other cancers such as breast cancer. Naylor said due to the simplicity of the approach, it could be important for use in countries without advanced medical facilities, where cancer treatments are often done only once, and “if it doesn’t work, you die.”

“Basic research is exciting and fun, but until you do something to impact the lives of people, to me it doesn’t have quite the kick,” Naylor said. “I want to see people live longer and not die from tumors.” .

The growing demand for mobile electronics coupled with technology companies’ need to scale infrastructure and systems to meet those demands is driving database-software giant Oracle to make major investments in silicon photonics.

Data centers of the future must have extremely high-efficient processors, memory chips and interconnects, and silicon photonics will be key to revolutionizing those communication systems, according to Ashok Krishnamoorthy, chief technologist for photonics at Oracle.

Krishnamoorthy gave an overview of Oracle’s work on developing photonics solutions for data centers and cloud computing at a luncheon during SPIE Photonics West where 34 of the 76 newly promoted SPIE Fellows were officially recognized.

He said Oracle Labs is working closely with industry, government, and academic partners to break through today’s technology limits with manufacturable and low-cost solutions to support a world increasingly dependent on high-speed interconnects for instant communications on tablets and smart phones.

“The future is mobile,” Krishnamoorthy said. After all, he joked, “I txt thr4 I am.” 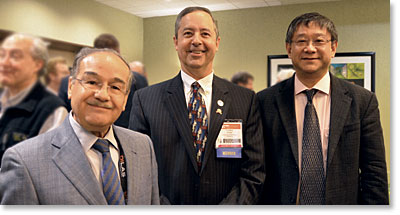 Technology-transfer managers at a handful of American universities outlined the commercialization opportunities available from researchers at their institutions during the Technology-Transfer Showcase at SPIE Photonics West.

A physics professor at University of Chicago, for instance, has developed a large-area picosecond photo detector but is not interested in making the device himself, said Matthew Martin of the university’s Center for Technology Development and Ventures.

Henry Frisch prefers to have someone else manufacture and market it so he can spend more time in his high-energy physics lab, Martin said.

At the University of Central Florida, researchers who have developed a widely tunable IR laser for military and medical applications and an uncooled far-IR sensing device are also looking to sell, license, and otherwise partner with someone in the business world who can turn their technologies into commercial success.

SPIE Fellow David Wick, licensing executive for Sandia National Labs, moderated the panel of speakers. “The hard part is finding that match, a company to take the technology to the marketplace,” he said.