A team of scientists at Washington University School of Medicine in St. Louis (WUSTL) led by SPIE Fellow Samuel Achilefu has developed a pair of high-tech glasses that help surgeons visualize cancer cells during surgeries. The cells glow blue when viewed through the glasses.

The technology incorporates custom video and a head-mounted display. Physicians inject a patient with a targeted molecular agent that attaches to cancer cells, making them glow.

The wearable technology is aided by near-IR quantum dots and was used during surgery for the first time on 10 February.

“This technology has great potential for patients and health-care professionals,” said Achilefu, a professor of radiology and biomedical engineering at WUSTL and co-leader of the Oncologic Imaging Program at Siteman Cancer Center. “Our goal is to make sure no cancer is left behind.”

Achilefu is the long-time chair of the conference on Reporters, Markers, Dyes, Nanoparticles, and Molecular Probes for Biomedical Applications at SPIE Photonics West. He also serves on the program committee and chairs several sessions at the annual event, where he has presented his research for more than a decade.

Achilefu has also published extensively in the SPIE Journal of Biomedical Optics, including the 2013 study he coauthored as part of a special section on fluorescence molecular imaging that details the development of the wearable technology. The open-access article, “Near-infrared fluorescence goggle system with complementary metal-oxide-semiconductor imaging sensor and see-through display,” is available in the SPIE Digital Library.

Cancer cells are difficult to see, even under high-powered magnification. The high-tech glasses are designed to make it easier for surgeons to distinguish cancer cells from healthy cells, helping to ensure no stray tumor cells are left behind during surgery. 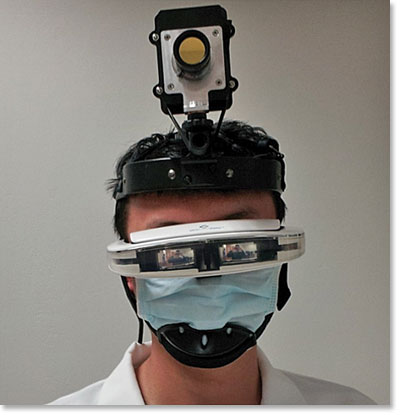 The fluorescence goggle system is based on CMOS sensor and see-through display technologies.

“We’re in the early stages of this technology, and more development and testing will be done, but we’re certainly encouraged by the potential benefits to patients,” said breast surgeon and WUSTL associate professor of surgery Julie Margenthaler, who performed the operation in February. “Imagine what it would mean if these glasses eliminated the need for follow-up surgery and the associated pain, inconvenience, and anxiety.”

The glasses could reduce the need for additional surgical procedures and continued stress on patients, as well as time and expenses. Margenthaler said about 20-25% of breast cancer patients who have lumps removed require a second surgery.

Achilefu worked with Washington University’s Office of Technology Management and has a patent pending for the technology. He also is seeking FDA approval for a different molecular agent he’s helping to develop for use with the glasses. The other agent specifically targets and stays longer in cancer cells.

Another optical tool for surgeons

Physicians in the Netherlands have turned to expertise from a planet-hunting telescope to steady their surgical microscope and save the sight of people threatened by blindness.

Doctors at the University Eye Clinic Maastricht found their microscope was quivering, making one in five sight-saving operations impossible.

The answer came in the form of the revolutionary Hummingbird device. Originally designed for testing Darwin, a potential European Space Agency space observatory, it enabled engineers to stabilize the surgical microscope and unlock its full potential for preventing sight loss.

The team mounted the Hummingbird device between the ceiling and the microscope’s arm to create an active-vibration damper to counter low-frequency vibrations.

Read more articles and blog posts celebrating the many ways that photonics are applied in creating a better world: