The Central Laser Facility in the UK houses five laser systems that are regularly accessed by scientists from academia and industry. With a total user community estimated at more than 600 scientists, the CLF provides more than 4400 individual user-access days per year, including 2700 for PhD students.

In the last five years, research conducted at the CLF has produced more than 500 peer-reviewed publications, often in extreme areas of sciences.

The Vulcan facility, one of the most intense lasers in the world, has broken records on several occasions for producing the highest optical intensity ever on a target. It is based on versatile Nd:glass chirped-pulse-amplification technology delivering beams into two target areas.

In its petawatt mode, it generates 1 PW (500 J/500 fs) beam with a peak intensity of 1021 Wcm–2. The shots can be fired every 20 minutes. The temporal shape of the long pulse beams can be programmed, and frequency doubling crystals can be used to generate the second harmonic. 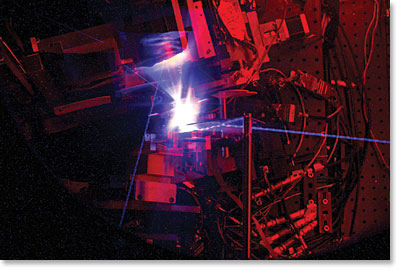 The Gemini facility is a high-power laser based on Ti:sapphire chirped-pulse-amplification technology delivering a unique dual beam combination of 2 x 0.5 PW (30 fs, 15 J) on target at a rate of one shot every 20 seconds. It can deliver peak intensities greater than 1021 Wcm–2 with 10–11 amplified spontaneous emission (ASE) contrast.

The capabilities of the Gemini facility balance and complement those of Vulcan. 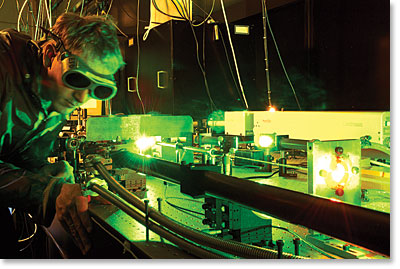 Artemis is a high-repetition-rate Ti:sapphire laser system providing a unique combination of ultrafast and XUV pulses for studies of ultrafast dynamics in atomic, molecular, and condensed- matter systems. Coherent XUV pulses are produced through high harmonic generation (HHG) and are synchronized to pump or probe pulses from the UV to the far infrared. 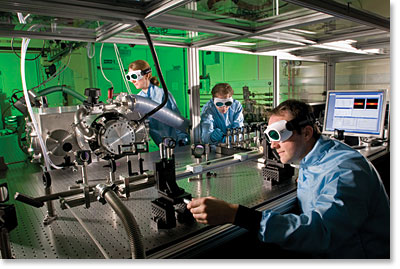 ULTRA can operate on samples in the solution and solid phases and is used for the investigation of dynamic processes in areas ranging from fundamental chemistry to structural biology.

The OCTOPUS comprises a collection of seven advanced imaging stations driven from a central laser hub with more than 20 specialized laser systems. Any number of these can be simultaneously directed to any of the stations for utmost experimental flexibility.

Advanced image processing algorithms are used to image real systems in real environments in real time, often well below the diffraction limit. Applications are mainly in the biomedical sciences, covering areas such as research into in-cell protein structure, cell signaling networks in health and disease, virus infection, and plant biology. 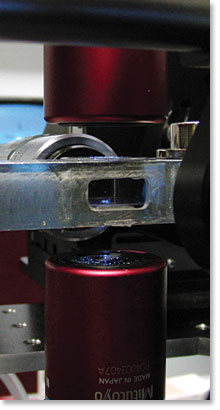 The CLF has developed several highly specialized optical traps, or “tweezers,” that are used for holding and manipulating objects such as bacteria, protein crystals, cells, or micron-sized beads.

Their applications include measuring pico-Newton forces within cells either through direct capture or by using laser-controlled nanoprobes in environmental and physical science research.

A new technique for microcrystal manipulation with laser tweezers, for instance, developed by researchers from the Diamond Light Source and the CLF was reported earlier this year and may save precious research days and resources and lead to faster breakthroughs in healthcare.

The novel laser-tweezer process helps to streamline the selection and placement of microscopic protein crystals for crystallographic analysis.

Preparing the crystals can often take a long time, but the new technique allows researchers to select and place the protein crystals on customized sample holders for crystallographic analysis on one of the structural biology beamlines at Diamond Light Source, the UK's national synchrotron science facility.

Studying protein crystals through X-ray crystallography enables researchers to understand the structure and function of a molecule.

The Vulcan facility has been extensively used to investigate and develop the science underpinning advanced ignition routes towards achieving fusion energy. The achievements include the Fast Ignition concept, as proposed by Ryosuke Kodama and collaborators in 2001.

This technique requires much lower implosion velocities than conventional central hot-spot inertial fusion schemes such as that used at the USA’s National Ignition Facility.

The CLF has also initiated and led the European High Power Laser Energy Research (HiPER) initiative to translate the single-shot proof of principle of inertial confinement fusion into a program of inertial fusion civil energy research, where the process can be repeated many times a second to extract desirable power output at ~1 GW level.

The high fields associated with the focused Vulcan and Gemini laser beams have enabled the exploration and evaluation of soft and hard X-ray production physics as sources of secondary radiation. High-harmonic production has been studied on both Vulcan and Gemini using targets ranging from low density gases to solids. A UK team led by Queen’s University of Belfast extended these bright sources into the keV region for the first time using the Vulcan laser.

At high laser intensities and relatively long pulse-duration pulses provided by the Vulcan PW laser facility, scientists reported in 2008 observing that up to 5% of the electron energy in the beam is converted directly into synchrotron X-rays and that the peak brightness of the X-ray beam is 1017 photons/s/mm2/mrad2/0.1% bandwidth witha critical energy of 25 keV, starting to approach the output parameters of second-generation synchrotron sources.

OCTOPUS confocal and super-resolution stations provide information on the interaction of drug and probe molecules with cells and tissues, with applications in medical therapies and diagnostics. Photodynamic therapy is investigated using both ULTRA (chemistry underlying the process) and OCTOPUS (behavior of therapeutic agents in cells and tissues).

OCTOPUS stations are also in use developing techniques to understand, from a systems biology viewpoint, the function of drugs at the molecular level in diseases like cancer, osteoporosis, and neurological disorders. Researchers are also using OCTOPUS to study the structural dynamics of protein folding in Alzheimer’s and motor-neuron disease and to understand how DNA is damaged and repaired.

Researchers at the CLF also invented and support development of Spatially Offset Raman Spectroscopy (SORS), which could probe deep within tissues for noninvasive cancer and bone disease diagnosis.

Companies spin out from CLF

These CLF researchers, along with collaboration with UK industry, government agencies, hospitals, and the defense industry, have played a key role in the formation of about 12 spin out companies. 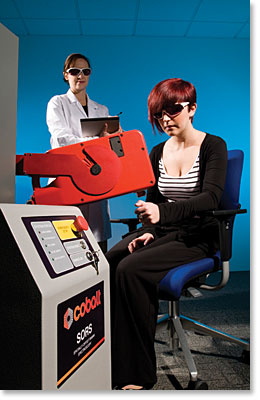 The ULTRA infrared station is used to investigate chemical reactions in solution on the picosecond and femtosecond timescales. A success reported in 2011 was the elucidation of reactions of CN radicals; comparisons with the gas phase revealed subtle, yet important differences due to interactions with the solvent.

A novel technique for mapping energy transfers within molecules, giving an instantaneous snapshot of electron interactions and types of couplings, was developed on Artemis by Ian Mercer. The technique of angle-resolved coherent (ARC) wave-mixing uses broadband light from a hollow fiber source in a new twist on four-wave mixing.

ARC measurements of a photosynthetic protein from purple algae showed peaks due to energy transfer in and between different pigments in the protein. The work confirmed evidence of strong coherent coupling in the protein and revealed the time-ordering of transition energies.

The CLF pioneered the technique of Optical Parametric Chirped Pulse Amplification (OPCPA) for the generation of extreme peak powers and intensities in excess of 1 PW. The concept gets around the issue of limited temporal compressibility of typically spectrally narrow high-power laser beams.

This opens a new route to very high peak-power laser systems (>100 PW). The concept was quickly adopted as the pre-amplifier of choice for high-energy petawatt laser systems around the world. 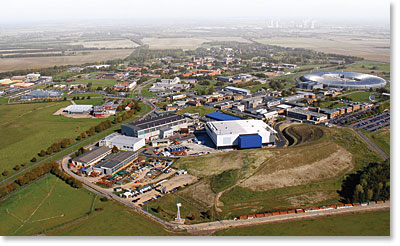 At CLF, OPCPA is used as the front end for the Vulcan Petawatt beam line and forms the basis of a project to upgrade the Vulcan High Power Laser facility to ~10-20 PW peak power, providing unique access to focused intensities of >1023 Wcm–2.

When completed, this will represent the most powerful and most intense laser in the world. It will be capable of investigating some of the new areas of extreme physics including high-energy density plasma physics promoted to a completely new and uncharted territory where the effects of QED in a plasma environment start to play a significant, if not a dominant, role.

Development of the next generation of efficient laser sources is key to realizing many of the conceptual applications developed on high-power lasers. Due to the inherent inefficiencies of the existing flashlamp-pumped laser technology, high-energy laser systems (>10 J) are broadly limited to pulse periods of tens of seconds.

In contrast, laser diodes offer high electrical efficiency, a low divergence output giving efficient pump radiation coupling, and an output spectrum which can be tuned to the absorption region of the laser medium. The resulting overall efficiency of such a source is typically greater than 10%, compared to 0.1% for traditional flashlamp-driven systems.

This opens up new opportunities combining high peak power with high average power. In this area, the CLF is developing a system, Diode Pumped Laser for Optical Experiments (DiPOLE) with architecture inherently scalable in single beams to energies beyond 1 kJ at repetition rates above 10 Hz. Such technology promises to open a host of new applications such as security screening of containers, healthcare imaging, and oncology.

John Collier joined the Central Laser Facility at Rutherford Appleton Laboratory in 1995 and has been director since 2009. He has a PhD in laser physics from University of Swansea where he is presently an honorary professor.

Pavel Matousek is an STFC senior fellow at the Central Laser Facility, where he has worked for more than 20 years, primarily in the areas of advanced vibrational spectroscopy, nonlinear optics and high-power lasers. He is a founding director and chief scientific officer of Cobalt Light Systems and a visiting professor at University College London. He has MSc and PhD degrees in physics from Czech Technical University in Prague.