New SPIE officers and board members for 2014.

SPIE President William Arnold announced election results for new officers and members of the SPIE board of directors at the Annual General Meeting of the Society in August.

New board members and officers will take office 1 January 2014. 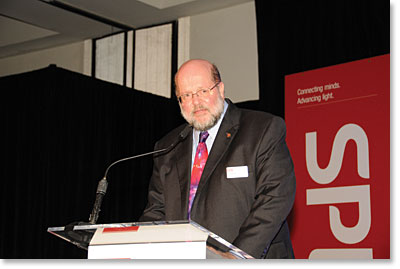 A leading authority in optical metrology, optical engineering and phase-measuring interferometry, Stahl serves as the optical metrology lead for optical components within the Optical Telescope Element of NASA’s James Webb Space Telescope Program. Many of the world’s largest telescopes have been fabricated with the aid of his high-speed and infrared phase-measuring interferometers.

Stahl has served on numerous SPIE committees and was the SPIE-appointed vice president of the International Commission for Optics from 2006 through 2011.

SPIE Fellow Toyohiko Yatagai, director of the Center for Optical Research and Education at Utsunomiya University (Japan), will serve as the 2014 president-elect and become SPIE president in January 2015.

Yatagai is the founder and co-chair of SPIE conferences on digital and analog optical computing and has been a member of the SPIE Board of Directors since 2011. He served as president of the Optical Society of Japan from 2008 through 2010.

Yatagai is the author of nine books and more than 300 academic papers in applied optics. His technical interests include optical measurement, holography, interferometry, biomedical imaging, and optical design and fabrication.

SPIE Fellow Robert A. Lieberman, president and CTO of Intelligent Optical Systems, Inc. (USA), has been elected to serve as the 2014 vice president.

An authority on biological, physical, and chemical sensors, Lieberman has chaired more than 25 sensor conferences and served in several SPIE leadership roles, including the Board of Directors, the Publications Committee, and the editorial board of Optical Engineering. Lieberman received the SPIE President’s Award in 2007.

Lieberman is chair of the SPIE committee on Engineering Science and Technology Policy and in 2012 participated in a SPIE-sponsored meeting with a Congressional caucus in Washington, DC, to discuss R&D and barriers facing science entrepreneurs.

“From medicine to defense, and from the sea floor to outer space, photonic devices are providing the images and information that enable computers and people to better understand our world. The rapid progress in this field is resulting in a profusion of new technologies, and new jobs,” Lieberman told caucus members.

Lieberman has a PhD in physics with an emphasis on solid-state physics and biophysics from the University of Michigan. His areas of expertise include technology management, spectroscopy/chemical detection, optical sensing and monitoring, and biophysics/biosensors.

With his election to vice president, Lieberman joins the SPIE presidential chain and will serve as president-elect in 2015 and the Society’s president in 2016.

SPIE Fellow Brian Lula, president and CEO of PI Physik Instrumente (USA), has been elected to serve as secretary/treasurer of SPIE. Lula also serves on the SPIE Financial Advisory, Strategic Planning, and Corporate and Exhibitor committees.

A CCD astronomical imager, telescope maker, and educator, Lula has had his photos featured in Sky & Telescope, Astronomy, and NASA’s Astrophoto of the Day (APOD).

SPIE Fellows who were elected to serve on the Board of Directors for the 2014–2016 term are:

In addition, SPIE Fellow Keith Lewis, a director of Sciovis Ltd. and research director of the UK's Electromagnetic Remote Sensing Defence Technology Centre, was appointed to serve a three-year term on the Board of Directors beginning in January.