The National Photonics Initiative (NPI) in the United States, the proposed International Year of Light, and the impact SPIE makes in the optics and photonics community through its educational mission and industry ties were major themes from reports submitted at the SPIE Annual General Meeting in August.

SPIE also announced its 2012 financial report and the 2013 election results at the meeting during SPIE Optics + Photonics in San Diego, CA.

2013 SPIE President William Arnold discussed the Society’s successful outreach and relationship-building with members from industry, the $3.2 million that SPIE provided in support of education and outreach programs during 2012, and the launch of the NPI.

SPIE used 8.7% of its operating revenue in 2012 for scholarships, teaching tools, student activities, prizes for science fairs, travel grants, and other forms of educational and community support. Arnold shared some of the expressions of gratitude for SPIE funding, including this from SPIE scholarship recipient Maria Serikova: “This award is the chance of my life, a chance for the brightest future I can imagine. I will always be grateful for these opportunities.”

Arnold, chief scientist and vice president of the ASML Technology Development Center, said the NPI and the SPIE “Industry Engagement Initiative” strongly resonated with him this year because of his personal and professional interests in their outcomes and because they are strategic priorities for the Society.

The U.S.-based NPI, an alliance of industry, government, and academic representatives borne out of recommendations in the 2012 National Research Council report, “Optics and Photonics, Essential Technologies for Our Nation,” launched in May. It identifies a series of measures that are crucial for maintaining U.S. competitiveness and national security.

The NPI has its roots in the 1998 “Harnessing Light” report which called attention to the importance of optics and photonics to the economy. Since then, Arnold pointed out, the European Union declared photonics one of six key enabling technologies and has committed €1.4 billion to photonics-related research over the next seven years. Germany, also has pledged to spend €1 billion over 10 years on photonics research and development.

Founding sponsors of the NPI are SPIE and the Optical Society (OSA). The American Physical Society (APS), the IEEE Photonics Society, and the Laser Institute of America (LIA) are also sponsors.

Arnold summarized the numerous activities that SPIE has been involved in to garner support for the NPI, including meetings with members of Congress in Washington, DC, and elsewhere.

Noting that 50% of non-student SPIE membership comes from industry, Arnold said SPIE provides numerous opportunities for members in industry to engage with SPIE conferences, journals, and exhibitions. As examples, he cited the SPIE constituents from industry who serve as judges, presenters, and applicants for the Prism Awards for Photonics Innovation and the SPIE Startup Challenge, both held during SPIE Photonics West in February.

SPIE Secretary/Treasurer Brian Lula reported to the members that total SPIE revenue had significantly increased in 2012 from 2011, largely due to investment performance. Most of SPIE investments are extremely secure due to conservative investment management, Lula said.

Lula presented the financial position of SPIE as of 31 December 2012, summarized in the table below.

“The Society is doing incredibly well financially,” he said.

SPIE Executive Director Eugene Arthurs gave an overview of SPIE activities and trends in SPIE membership during the past year, saying he was particularly pleased by the Society’s support of the proposed International Year of Light.

Earlier this year, an international delegation of senior researchers, including SPIE President-Elect H. Philip Stahl, presented the proposal at the United Nations headquarters in New York. That informational meeting set in place the procedure towards adoption by the UN General Assembly. If approved, optics and photonics will receive extensive international exposure from an International Year of Light, Arthurs said.

He also discussed educational and outreach activities in 2012 and the growth of SPIE membership. SPIE membership among students and early career professionals shows healthy growth, Arthurs said, as do SPIE Student Chapters and clubs. SPIE membership was 17,659 at the end of July 2013, he said.

Arthurs said he was also pleased to report that the SPIE Digital Library, which switched from AIP to the Silverchair platform in August 2012, continues to grow in content, usage, and subscriber base.

The next Annual General Meeting will be 19 August 2014 in conjunction with SPIE Optics+Photonics in San Diego. 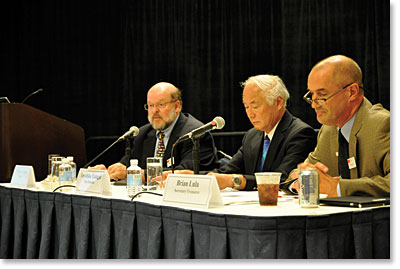 To receive a copy of the official minutes of the 2013 SPIE Annual General Meeting, email governance@spie.org.