Paul McManamon and Alan Willner receive SPIE President’s Award for work on Optics and Photonics, Essential Technologies for Our Nation.

SPIE Fellow and past President Paul McManamon along with SPIE Fellow Alan Willner received the SPIE President’s Award at SPIE Optics + Photonics in August for co-chairing the US National Research Council committee that issued the landmark 2012 report, “Optics and Photonics, Essential Technologies for Our Nation.” 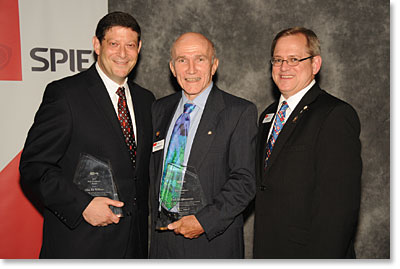 The report led to the launch earlier this year of the National Photonics Initiative (NPI), a collaborative alliance among industry, academia, and government to raise awareness of photonics and drive US funding and investment in five key photonics-driven fields.

SPIE and the OSA are founding sponsors of the NPI, playing leading roles in bringing attention to the report and the need for action to meet its “grand challenges” in advanced manufacturing; communications and information technology; defense and national security; energy; and health and medicine. Other NPI sponsors include the American Physical Society, the IEEE Photonics Society, and the Laser Institute of America.

McManamon is owner of Exciting Technology, a consulting company; technology director of the Laser and Optical Communication Institute at the University of Dayton; and retired chief scientist for the Sensor Directorate at the U.S. Air Force Research Laboratory at Wright-Patterson Air Force Base. McManamon, who is a judge for the 2014 Prism Awards for Photonics Innovation, has a PhD in physics from Ohio State University.

Willner holds the Steven and Kathryn Sample chair in engineering at University of Southern California. He is a member of the Defense Sciences Research Council and founder and CTO of Phaethon Communications, a company acquired by Teraxion. His PhD from Columbia University is in electrical engineering.

Other SPIE annual awards presented at a banquet in August were:

Nominations may be made through 1 October of any given year and are considered active for three years from the submission date.