Bill Arnold, the 2013 SPIE president, is the chief scientist and vice president of the ASML Technology Development Center, responsible for ASML’s global technology development efforts in microlithographic exposure tools. Currently working in Arizona (USA), he has also worked at ASML’s Netherlands headquarters and frequently travels to California, Taiwan, and elsewhere in his lead role as R&D and IP manager for the world’s largest lithography equipment manufacturer.

He became an SPIE Fellow in 2004 in recognition of his work in optical lithography in support of semiconductor production.

Before joining ASML in 1998, Arnold, 58, worked for 18 years at Advanced Micro Devices in California where he was a senior fellow. He received his BA in physics from Hampshire College (USA) and an MS in physics from University of Chicago.

His service to SPIE includes four years as chairman of the SPIE Publications Committee and numerous roles with SPIE Advanced Lithography, including chair and vice chair of what was called SPIE Microlithography in the 1990s. At the 1995 symposium, he invited Intel co-founder Gordon Moore to give a plenary talk on lithography and the future of Moore’s Law.

Arnold, who wrote about Moore’s Law and the future of EUV lithography for SPIE Professional in 2008, is scheduled to give a keynote talk at SPIE Advanced Lithography in February on metrology in times of shrinking budgets.

His first President's Letter for SPIE Professional discusses the development of light-based technologies.

We asked Arnold to discuss his career path, education, and other interests with the members of SPIE. 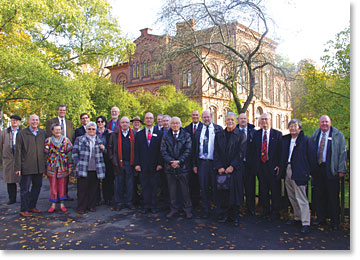 SPIE President Bill Arnold, 6th from right, with SPIE Board members and staff in Sweden last October. The group toured the building where Johannes Rydberg worked and proposed the Rydberg formula for the wavelength of light emitted from the hydrogen atom.

Tell us a little bit about where you grew up, your family, and your hobbies and interests.

I grew up in various places in the eastern United States and Midwest. My dad was a nuclear engineer working for Westinghouse, and we moved several times when I was young. However, I spent most of my time in elementary school and high school in Pittsburgh, PA, and summers in Holland, MI. I like to be active and I travel a lot with my wife, Jane. I fill my passport with a lot of stamps and have to get extra pages. I am a long-time bookworm with a big library but in recent years I carry a Kindle on travel. I love dogs and take my three best friends for long walks in the Arizona desert when the weather is nice in the winter and on the beach at Lake Michigan in the summer. Like most lithographers, I like to take pictures. Also, I paint a picture or two a year, though I am not much of an artist.

How and when did you first get interested in a career in science and solving technical problems?

I went to a great engineering high school in Baltimore, MD, for 2 ½ years, Baltimore Polytechnic. I learned a lot of math and mechanical drawing, which served me well in my career.

Later in college, I had an inspiring physics professor who introduced me to quantum mechanics and the writings of Richard Feynman, including his classic talk, “There’s Plenty of Room at the Bottom,” which described the incredible horizons and future of shrinking objects and devices to the microscopic and below. Everyone should read that article.

What led you into the semiconductor industry?

I moved to California with Jane in 1979 and looked for a job through the student help service at University of California, Berkeley, where she had received her undergraduate degree. One of those companies where I interviewed was Advanced Micro Devices (AMD), run by the Silicon Valley legend Jerry Sanders.

Because I had studied optics at the University of Chicago, AMD offered me a job as a photolithographer, which, at that time, was not taught in any school.

I inherited a wafer stepper, the key tool of silicon fabrication, but at that time no one knew what it was good for. It was an orphan, as the previous engineer who owned it had quit.

Times being what they were in the depths of a recession, I took the job. I had no idea how to make the stepper work nor did anyone else at AMD. They handed me the manuals on my first day and said, “This is yours; make some wafers with it.” That was the biggest break of my career.

How and when did you first get involved with SPIE?

In photolithography in the early 1980s there was only one meeting a year of any real merit and luckily for me, it was only a five-minute drive from where I worked in Sunnyvale, CA. This was the SPIE Optical Lithography Conference, then held in Santa Clara. I think my first meeting was in 1982.

I met some of the greats in my field at that meeting including Burn Lin and Grant Willson. I started writing papers on what I was doing with wafer steppers starting in 1983. Burn Lin asked me to be a session chair a few years later, and I was hooked into service.

Can you discuss your role in strategic planning with ASML?

I joined ASML as its chief scientist in 1998 and have been involved in the long-range planning of our products since I started. We have a rigorous process which combines excellent field marketing with world-class research and development to decide what types of tools must be built to fabricate the semiconductor devices of three to five years in the future.

Since I made chips in my early career, my best contributions have been in forecasting what will be needed next by our customers.

What kinds of career opportunities are there in lithography?

What kinds of traits, skills, education, and experiences do you look for in a new employee?

Basic math, science, and computer skills are the threshold requirements. A background in optics is always good! I like people who can do an experiment or build things themselves. Most important is the ability to work well with other people as lithography and semiconductor fabrication is a team effort.