Stereolithography pioneer has satisfying career in industry and academia

Nowadays most of us take computer-generated three-dimensional visuals for granted. Aided by powerful small computers and large displays, anyone needing to work with a 3D representation can do so quite easily, be it for work or pleasure.

In the early 1980s, though, such tools were not so readily available. 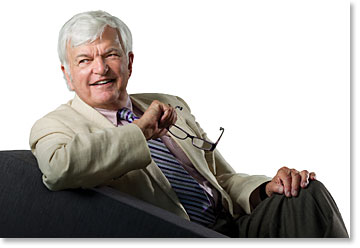 It was at that time, after teaching organic chemistry for many years, that Douglas Neckers (then at the Center for Photochemical Sciences in Bowling Green, Ohio) realized he could use his skills as a photopolymer chemist together with an evolving new laser-based model-making technique called stereolithography. Neckers says the “image” he created was the first-ever three-dimensional medical image, a model of a real human heart.

“I had noticed that chemistry undergraduates from all walks of life were experiencing considerable difficulty visualizing in three dimensions,” he explains. “It’s an important skill for all organic chemists but especially for any pre-health professionals taking the course. I wanted them to be able to see and plan what they were going to have to do surgically.”

So in 1988, using input from an MRI imager and a stereolithography system on loan from 3D Systems (founded by stereolithography inventor Chuck Hull), Neckers created a polymer-based model of a real human heart.

Neckers has since retired from Bowling Green University as the McMaster Distinguished Research Professor Emeritus of Photochemical Sciences and is currently CEO of Spectra Group Limited (SGL), an Ohio company he founded in 1990 after creating that first medical replica.

At SGL, again working with 3D Systems and in collaboration with the Cleveland Clinic among others, Neckers used stereolithography to create medical models from a patient’s CT scans that surgeons could then use to plan upcoming operations. And not incidentally to him, the company could also provide his students with jobs when they were finished with school. As things turned out, however, because the healthcare reimbursement mechanisms were too slow for a viable business model, SGL has since evolved into the photoscience materials company that it is today.

Stereolithography is just one example of photoscience in action. Today photochemistry also has important applications in electronics, photography, printing, and manufacturing.

Early in his career Neckers realized that energy curing (more commonly called UV curing at the time) of photo-sensitized compounds offered some real benefits to industry. The process is environmentally friendly (less use of solvents) and fast. Companies whose business was rapidly turning liquids into solids — from quick-drying paint and varnishes to printing and medicine — were seriously interested and that led to the founding of the Center for Photochemical Sciences.

Almost immediately, Neckers was consulting to companies such as Mead, 3D Systems, and Ciba Geigy and sometimes giving courses in basic photochemical sciences at SPIE meetings.

“The contacts made in academia and industry brought in funds and creative energy,” he said.

Over the years, that creative energy has been responsible for Neckers and his research group creating innovative plastic coatings for medicines like insulin to allow people to take it orally. The group at BGSU, with 65 patents to its credit, is also responsible for such useful items as quick-drying coatings for engines and algaecide-infused paint for ship hulls.

Neckers attributes the success of the BGSU center to a continuing awareness of industry and its needs. “The collaboration with industry helped build the successful PhD program,” he says. “We admitted a broad spectrum of students (not just chemists) and made sure they were trained for jobs and leadership.”

It is this overt commitment, not just to teaching and education but to what it leads to, that is a constant in discussions with Neckers. “It’s a matter of integrity,” he said. “You can’t give someone a strong education without ensuring that they then have somewhere to go when they graduate.”

Neckers adds, “At the end of the day I wanted to make sure that the students were educated properly so that they could step into a position that would lead to a very good life for them.”

Looking forward, Neckers offers some ideas about what may lie ahead. He notes that three-dimensional printing at home is now a reality (See article on Chuck Hull, founder of 3D Systems.) and that a huge and diverse 3D manufacturing industry has grown out of the development of stereolithography. Neckers wonders how long it will be before news providers offer digital links to three dimensional models that could enhance their stories.

He says that dentistry is a big growth area. Right now photochemistry offers faster curing of fillings, but maybe making teeth in a dentist’s office is just around the corner. And he hopes that photoscience will play a larger role in solar energy conversion over the next 5-10 years.

And as for the medical models, Neckers believes fully functional models of, for instance, knee joints, are not too far away while noting that finding materials to behave like the various tissues involved (ligaments, cartilage, etc.) is proving a significant challenge. Nonetheless 3D Systems reports that its medical products in oral, hearing, and orthopedics represent some of its fastest growing markets.

Neckers is the author of several papers for SPIE and is editor of SPIE Press Milestones Series Selected Papers on Photochemistry.

–Stephen G. Anderson is industry and market strategist for SPIE.