After a 36-week flight, the Mars rover Curiosity landed squarely at its destination 5 August inside Gale Crater on the Red Planet. NASA’s most advanced Mars rover will spend two years gathering information on geology, atmosphere, and environment and trying to discover if Mars ever had environmental conditions that could sustain microbial life.

About the size of a small SUV, Curiosity is crowded with state-of-the-art cameras, spectrophotometers, radiation detectors, lasers, and sensors. 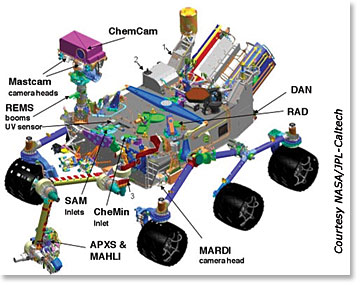 Many of these devices showcase the latest in optics and photonics technologies and were developed or manufactured by SPIE corporate members and exhibitors at SPIE events.

• Imaging sensors from e2v (UK) are located on the ChemCam and the Chemistry and Mineralogy instrument (CheMin). NASA’s Mars Reconnaissance Orbiter carried e2v imaging sensors, which captured an image of the Mars rover as it parachuted to the planet’s surface.

• The CheMin is an x-ray diffraction-capable mineralogy instrument for detecting the presence of water in the Martian rocks and soil. Samples gathered in the tunable sample cells must be shaken at variable amplitudes and frequencies. These controlled vibrations are generated by PI Ceramic (Germany) monolithic piezo actuators. PI miCos (Germany) also equipped the ChemCam with a precision motorized positioning stage. The two companies are part of the PI Physik Instrumente (USA) family of companies.

Other institutions contributing to the Mars Curiosity mission include:

Whatever the outcome of this mission, these innovative photonics companies, along with several others not mentioned here, are helping advance our knowledge of Mars and the solar system.