As a trained scientist, it's my nature to look at the world as objectively as possible. However, there are some circumstances in which one cannot simply remain neutral. During my second year of graduate school in Arizona (USA), I encountered one of those situations.

I had come to Tempe from the East Coast to study Mars. There, I spent my days in front of computer screens, analyzing data from the thermal-emission imaging system (THEMIS) aboard the Mars Odyssey spacecraft.

At the same time, my girlfriend was serving in AmeriCorps, the Peace Corps' domestic equivalent, working at a refugee resettlement agency in Phoenix. It was there at a weekend cookout with the agency's recent arrivals that I met an articulate Congolese former university professor-who was then working as a janitor at Phoenix Sky Harbor International Airport.

Over the following semesters, I derived much personal satisfaction from serving as a volunteer "American friend" to the professor, whom I will call G, and the other refugees. Far removed from the academic world that I inhabited, they were struggling, not to earn a degree, but simply to adapt and survive in an alien society, having fled from their own homelands under the most desperate of circumstances. I was happy to assist by showing them around the city, going on hikes, and generally helping them to adapt to and understand the United States.

The experience led me to consider how I might apply my own specialized knowledge to humanitarian problems. 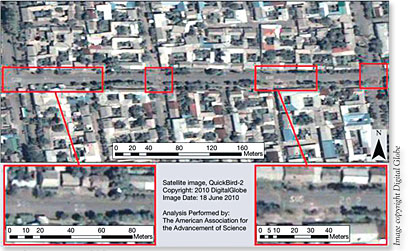 AAAS identified 116 SOS messages painted on roadways and other horizontal surfaces during the June 2010 ethnic clashes in and around the city of Osh in Kyrgyzstan. AAAS used the software packages ERDAS Imagine and ArcView for processing satellite imagery from Digital Globe's QuickBird-2 and creating geo-referenced damage assessments.
Image copyright Digital Globe

Four years later, my colleagues and I at the American Association for the Advancement of Science (AAAS) Geospatial Technologies and Human Rights Project use satellite imagery to document and corroborate reports of conflicts affecting human rights.

Until very recently, the ability to obtain high-resolution imagery over hostile territory was the exclusive privilege of the handful of governments who could afford the enormous expense of launching satellites into orbit. The last decade, however, has seen the rapid introduction of commercial imaging spacecraft with spatial resolutions below one meter per pixel. This has led to an explosion of capabilities for businesses and non-governmental organizations, many of which are still only beginning to be realized.

For the human-rights community, it has meant that atrocities, which previously were documented only by the breathless verbal accounts of those fortunate enough to escape, can now be confirmed by orbital imagery in exacting detail.

However, matching specific reports to the corresponding imagery is not as easy as it sounds.

For example, early field reports of an attack are frequently full of confusing and contradictory information due to the chaos inherent to armed conflict. This is particularly true regarding location information, and it is often compounded by language barriers between survivors and the aid workers who transcribe their accounts.

Spelling and transliteration can also vary significantly between sources, with one group writing a report using the letters Q, S, or Ph in a place name and another group making a map of the same place using K, Z, and F.

Resolving these sorts of ambiguities represents a large component of our work and involves the use of numerous online databases, sophisticated fuzzy matching algorithms, low-resolution satellite imagery, intuition, and guesswork.

On more than one occasion I have anxiously anticipated the arrival of a new image only to find that the village it was supposed to depict had been incorrectly identified, or worse, didn't exist at all at the given coordinates.

The imagery we use is acquired from meter-sized Cassegrain telescopes with diffraction-limited optics located in orbits 700 kilometers above Earth. At this altitude, the satellite will pass over a target in minutes, only seconds of which is spent at the optimum viewing geometry.

Because of this, and despite what Hollywood has led many to believe, our field of view cannot zoom and pan in real time to follow a fleeing suspect; and the magical "enhance" command, sadly, exists only in fiction.

What does exist are CCD arrays that record a scene in multiple bands spanning the visible and infrared wavelengths and ground-based software routines that allow us to transform these panchromatic and multispectral layers in parameter space to create full-color composite images at 50 centimeters per pixel.

Once an image of the correct area has been obtained and processed, interpretation often presents its own challenges.

At maximum civilian resolution, individual human beings will present themselves as a single pixel. They are therefore extraordinarily difficult to distinguish from rocks, bushes, or other small-scale elements of a scene. Only when large numbers of people congregate in groups, as protestors did in Tahrir Square in Cairo, or refugees did while attempting to flee Misrata in Libya, is it possible to briefly glimpse the human component of the events from above.

An unfortunate consequence of this limitation is that atrocities resulting from landmines and small-arms fire are largely invisible; a militia could march through a village spraying gunfire and murdering hundreds, while leaving little observable trace.

Most attacks, however, are not nearly that subtle. In the vast majority of cases we have encountered, the destruction is quite thorough, though the pattern of devastation often exhibits regional variations.

In Africa, particularly in places like Darfur, villages are often completely burned to the ground, leaving behind only smoldering ashes. Over time, wind and rain cause these burn scars to fade from view, but not completely.

On several occasions where a village has been re-imaged in the years following an attack, the faint outlines of the previous inhabitants' homes are often still visible beneath the new construction. In Burma, by contrast, villages tend to disappear into the jungle without even a scorch mark on the ground, leaving no trace that the area had ever been inhabited at all.

In more industrialized conflict zones, such as Georgia and Libya, structures are more frequently smashed, blown up, or demolished by heavy weaponry. There, streets are often pockmarked with craters whose morphology can sometimes reveal the origin of the shelling.

Along with damage patterns, I've recently noticed similar variations in the way different societies approach mass burial. At times like those, I'm glad I can't see any greater detail.

From our vantage point so far overhead, we are unable to receive the immediate validation of our work that is shared by human rights workers on the ground. Because of this, at times, it can be easy to wonder whether the effort we put into documenting abuses has been effective in diminishing their scope. It is then that I remind myself that human rights violations are like many types of diseases; they flourish when hidden and neglected.

Exposure and attention is sometimes an antiseptic on its own, and awareness of the problem is always a necessary precursor to successful treatment.

Remote sensing allows us to use cutting-edge technology to bring worldwide public awareness to the most closed-off and inaccessible corners of the globe, revealing, without bias or political agenda, what is actually taking place.

My friend G never told me the story of why he was forced to leave his homeland, and I never asked. I've heard enough from others in his situation and seen enough in our imagery to know that it must have been bad.

At AAAS, I am able to combine my passion for science with my deeply held belief in human rights. It's a privilege to be able to use my talents in this way so that in the future, people like G won't have to flee from their homes ever again.

-Jonathan Drake is senior project coordinator at the American Association for the Advancement of Science's Geospatial Technologies and Human Rights Project. He has a BS in physics from Dickinson College and an MS in geology from Arizona State University where he mapped periglacial geomorphology on Mars using the THEMIS instrument aboard the Mars Odyssey spacecraft.

Any views expressed are solely those of the author and do not represent an official position of AAAS or SPIE.

Join the discussion celebrating the many ways that photonics are applied in creating a better world at PhotonicsforaBetterWorld.org.

Read more articles in the SPIE Professional series at spie.org/betterworld.

Do you have a story to tell about the work that you or colleagues do to make the world a better place? Write to us at spieprofessional@spie.org.

This technology has been used successfully to document

• Destruction of homes in the Gaza Strip

• Destruction of villages, livestock, and crops in Darfur