Measurement methodology and standards for LEDs and other solid-state lighting are advancing with the market for energy-efficient lighting.
30 September 2011
Alan Tirpak and Alexandre Y. Fong

The intrinsic versatility of LEDs as illumination sources, coupled with a world-wide push for energy-efficient lighting, has driven the double-digit growth of the LED and solid-state lighting (SSL) industry even through the recent recessionary economic periods. As demand increases and competitive offerings proliferate, so does the need to more precisely define performance specifications.

Several initiatives are under way to standardize the measurement methodology to address this need. There are several major methodologies involved in assessing these photonic devices and more than a few standards organizations and governing bodies contributing to this effort.

LEDs and solid-state lighting have come a long way from the single T 1-3/4 devices once found ubiquitously as status indicators on consumer electronics. The Information Network recently predicted that the LED chip market would increase more than 40% in 2011. Strategies Unlimited reported in its annual review and forecast in August that the overall LED industry grew in 2010 more than 90% from 2009. 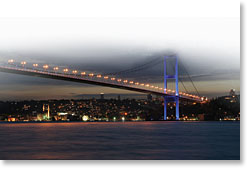 The night view of Bosporus Bridge illuminated by blue LED light in Istanbul.

Moreover, specific applications areas, such as display backlighting and signage, are expected to grow as much as 40% worldwide through 2013, according to a June 2011 report from IMS Research. However, areas such as general illumination, automobile, and other vehicle lighting remain in the early stages.

Governments around the world are investing in developing the next generation of these devices. The U.S. Department of Energy (DOE), for example, allocated $14.8 million to LED lighting research in just one round of funding earlier this year.

The promise of improved performance and efficiency, together with the economic scale of the opportunity, has meant that objective and effective product metrics have become an area of critical interest for the supply chain and those charged with the development of the industry.

The instruments and technologies used in the testing of LED parameters are also playing a role in this prospering industry.

The International Organization for Standardization (ISO), the International Electrotechnical Commission (IEC), and the National Electrical Manufacturers Association (NEMA) are among several organizations throughout the world developing standards for the LED lighting industry. The DOE also has several standards initiatives, including the Commercially Available LED Product Evaluation and Reporting (CALiPER) program.

Such efforts seek to either adapt accepted techniques and standards to these new devices or develop new methodologies to better address the properties of solid-state lighting and provide a more reliable and accurate assessment. With the rapid, almost daily introduction of new technologies in this field, most efforts are still in their formative stages.

LEDs and other forms of solid-state lighting are typically assessed in terms of color, efficiency, and emitted energy and brightness. In the lighting industry, output is expressed in photopic units that correspond to the eye's daylight response. Elsewhere, radiometric units that indicate output in terms of energy are used. See R. Young, et al, "Reducing Uncertainty in Precision High Brightness LED Measurements," Photonics Spectra (December 2005). 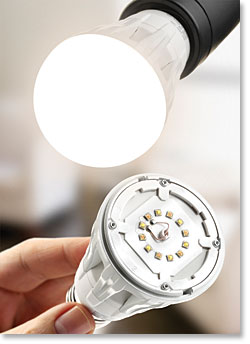 Early in the development of optical measurement techniques for LEDs, the International Commission on Illumination (CIE) developed a technical recommendation document (CIE 127:2007) defining the quantities and methods. It has become the foundation for all of solid-state lighting, including arrayed and composite devices such as luminaires or light engines. This CIE 127 document has been adopted by other bodies such as ISO for their documents.

The amount of energy emitted depends upon how the measurement is performed and for what purpose it will be used. CIE 127 follows this line of thought. For example, prior to CIE 127, luminous intensity measurements that describe point sources did not fully account for the variable location of the point of origin within LED packaging. CIE 127 remedied this by defining a new fundamental parameter known as averaged luminous intensity with specific parameters for its measurement in terms of measurement distance and field of view, as defined by a measurement aperture. Two conditions of this measurement were defined as shown below.

Angular intensity distribution is typically measured using a goniophotometer, a photometric or spectral measurement instrument coupled to a goniometric platform. An imaging photometer can be used to collect distribution measurements faster and in a smaller space by utilizing near-field approximations. 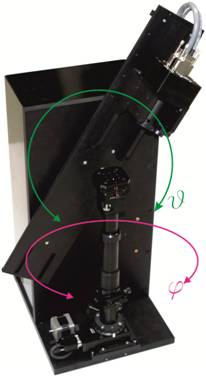 Total flux measurements quantify the total integrated emitted energy from all angles of the source. Integrating spheres (as shown below) are used in this measurement, and a spectral-detection instrument or spectrally matched broadband detection system is used to record this quantity in photopic units of lumens, W/nm radiometrically and W/nm-sr spectroradiometrically. 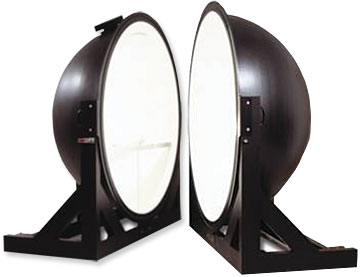 For color, chromaticity coordinates are defined by the CIE. These coordinates depend upon the model for color used and the era in which it was defined or developed. Efficiency and efficacy are measures of the amount of light with respect to electrical power consumption. They differ in that efficiency is unit-less (expressed in percentage), and efficacy is indicated in mixed units (i.e. lumens/watt).

Other parameters, such as irradiance/illuminance (the light incident upon a surface, W/cm2 and lux) and luminance/radiance (the light measured within a solid angle from the source) (W/cm2-sr and cd/m2 or fL), are also sometimes referenced but not as commonly in LED lighting applications. The latter quantities are, however, central in display applications.

The embrace of CIE 127 by the industry led to adoption of its principles and techniques by ISO and spawned a host a host of efforts by the IEC, NEMA, the Illuminating Engineering Society (IES), Zhaga, and others. For example, IES of North America (IESNA) released LM-79, "Approved Method: Electrical and Photometric Measurements of Solid-State Lighting Products" and LM-80 "Approved Method: Measuring Lumen Maintenance of LED Light Sources" in 2008. NEMA SSL 1-2010 concentrates on electronic drivers for LED devices, arrays, or systems, and NEMA SSL 6-2010 focuses on solid-state lighting for incandescent replacement. Both the NEMA and IESNA standards encompass elements of CIE 127, with an emphasis on area-illumination applications for designers, manufacturers, and users.

These and other standards such as ANSI C78-377, (Chromaticity) and IES RP-16 Addendum "a" (LED definitions), have been the staple for testing labs.

The Council for Optical Radiation Measurements (CORM), a U.S. organization of industrial, academic, and government professionals that provides guidance to the National Institute of Standards and Technology (NIST) on industry needs for the development of physical standards, calibration services, and interlaboratory collaboration programs, has been key in broadening the fundamental basis for new techniques such as thermally stabilized measurements.

In an effort to consolidate some of these initiatives, the DOE's CALiPER program was created to support efforts in the development-agreed testing methodology for SSL products available for general illumination. This program has been key in defining and setting test standards for the SSL community.

At the consumer level, the DOE's ENERGY STAR program has expanded to include LED and SSL products, with a decided emphasis on denoting energy efficiency. The DOE also issues a twice-yearly report, "Lighting Facts Product Snapshot," which provides detailed performance information about LED replacement lamps. The report, mandated by the U.S. Federal Trade Commission, is designed to help lighting retailers, designers, consumers, and others understand the current state of the LED replacement lamp market and make informed decisions about lighting purchases.

While TC2-45, the technical committee that was responsible for CIE 127:2007, is no longer active, the CIE continues to develop and refine its thinking on LEDs and related sources as they evolve.

Other technical committees in CIE Division 2 and their undertakings include:

More details on the technical committees and their work are available at div2.cie.co.at.

The Lighting Research Center (LRC) at Rensselaer Polytechnic Institute, via its Alliance for Solid-State Illumination Systems and Technologies (ASSIST) program, also publishes reports to help reduce technical and market barriers to the broad adoption of SSL lighting. A report that ASSIST issued in June gives recommendations for evaluating LED-based forms of outdoor lighting.

Because of the recent spike in LED luminaire lighting products, it has become necessary to adapt these and other standards to accommodate the challenges associated with LED fixtures. Not only are color and intensity distribution of concern, but also safety and the effects of dimming. To address this, the following standards, test methods, and best practice recommendations have been established:

To emphasize the importance of these efforts and bring the multitude of issues with LED luminaire testing to light, participants at a 2010 CALiPER workshop compiled a list of documents that are currently being modified, and they included additional testing parameters to be considered. Since accurate characterization of LED luminaires is paramount to the acceptance and adoption of these fixtures into wide-scale residential and commercial settings, it is imperative that these standards be set quickly in order to minimize the potential flood of inferior lighting products to the market.

Some of these topics and standards include:

Alan Tirpak is product manager and applications engineer at Gooch and Housego (USA). He has a BS and MS in physics from University of Central Florida (USA). He has worked on industry projects for Raytheon and the U.S. Department of Defense and teaches a course for SPIE on accurate measurement of LED optical properties. He was a co-coordinator for the 2011 CORM technical conference in May.

Alexandre Y. Fong is senior vice-president of business development for the Life Sciences and Instrumentation division of Gooch and Housego (USA). An SPIE member and president of the Florida Photonics Cluster, Fong holds a BS and MSc in experimental physics from York University (Canada) and an MBA from University of Florida. He is a chartered engineer.

LEDs have very different spectral and spatial characteristics from traditional incandescent and discharge lamps for illumination.

The photometry of traditional lamps has been well established, but measurements of LEDs are not as uniform as they should be, and large discrepancies (as much as 50%) of measurement results are often reported.

The variations are primarily caused by differences in measurement methods and conditions, and errors in instruments. CIE 127 (the standard recommended by the International Commission on Illumination) prescribed the standard measurement geometry for luminous intensity measurements for LEDs.