Electronic Sensors Can Act As Skin

Two groups of biomedical optics researchers in the USA are a step closer to achieving artificial skin.

Multiple photonics technologies can assist human hearing and sight, but not many can assist us with touch. The ability to apply just the right amount of pressure to swat a mosquito or pet a kitten is hard to replicate, especially on a large scale. Creating a non-skin large-surface sensor that is flexible and stretchy and also highly sensitive has proven hard to achieve.

Now, however, two groups of researchers in California (USA) are one step closer to achieving artificial skin. They have each developed a sensitive flexible sheet made of semiconductor nanowires. One team was led by SPIE Fellow Zhenan Bao from Stanford University and the other by Ali Javey from University of California, Berkeley.

Both methods of making electronic skin, or e-skin, resulted in high sensitivity using a low-cost manufacturing technique. The Stanford team created a sensor with unsurpassed sensitivity, while the Berkeley team created a flexible sensor with exceptionally low voltage. The work of both Bao’s and Javey’s teams was published in the September issue of Nature Materials.

The material was made using soft lithography. First the microstructured films, shaped like miniature pyramids, were combined into the organic field-effect transistors as a dielectric layer. The researchers then molded PDMS, a liquid rubber that turns into a solid when heated, with the pre-etched wafer into the desired shapes. The cured film was then peeled off, resulting in a flexible sensing sheet.

The material detects pressures “well below the pressure exerted by a 20-milligram bluebottle fly carcass we experimented with and does so with unprecedented speed,” Bao says.

The pressure sensitivity of the microstructured films is around 0 to 15 kilopascals, which surpasses any unstructured elastomeric films of similar thickness previously demonstrated. It is also tunable by using different microstructures.

“A centimeter-square area film of our sensors can contain as much as 25 million tiny features,” Tee says. “It definitely took some time to optimize the fabrication process of the material, and we are happy with the fact that it works as expected.”

Ali Javey’s group in Berkeley took an entirely different approach with inorganic material. The Berkeley e-skin is made of semiconductor nanowires on a commercially available substrate, and it operates using very low voltage.

“The problem is that organic materials are poor semiconductors, which means electronic devices made out of them would often require high voltages to operate the circuitry,” Javey says. “Inorganic materials, on the other hand, have excellent electrical properties and can operate on low power.”

They grew GeSi core/shell nanowires by using a home-made chemical vapor deposition (CVD) system with GeH4 and SiH4 gases. “The nanowires are then printed on the flexible substrates,” Takei says. “The GeSi nanowires are transistor materials, which allow us to control the on/off current. On top of fabricated nanowire-based transistors, we laminated a pressure-sensitive rubber where the rubber contacts the drain electrodes of the transistors. The drain current of transistors is changed by the conductance of rubber.”

Since the Berkeley group used inorganic nanowires, they could operate the sensor at an extremely low voltage, less than 5V. “Our novel point is the platform of nanowire-based macroscale flexible substrate,” Takei explains. “Our demonstration is the first proof-of-concept to realize macroscale, low-voltage, and flexible electronics.”

This kind of technology is already in use in devices like smartphones and e-readers. Takei notes that a University of Tokyo group was the first to demonstrate e-skin devices using organic materials in 2004. “The pressure-sensitive rubber is not new and we can purchase that from a company,” Takei says.

However, this kind of sensing is difficult to implement on such a large scale. Mimicking skin or any large surface sensor requires large arrays of pressure sensors that are flexible and stretchable. The challenge is to find chemical structures that provide good semiconducting properties and yet stay mechanically robust.

“Making arrays of high-density sensors on flexible substrates is hard to produce due to assembly and processing-related challenges that are involved with the related large-scale integration,” says SPIE Fellow Yosi Bar-Cohen, a senior research scientist at NASA’s Jet Propulsion Laboratory (JPL), who was not involved in either project.

The sensors have several potential medical applications and could be used in robotics, touch-screen displays, and for automobile safety.

For example, the sensors can be used on curved surfaces such as steering wheels. “Being able to detect changes in pressure can be an aid to driver fatigue. When drivers fall asleep, the pressure on the steering wheel will decrease, and it can alert onboard circuitry to slow the car or warn the driver,” Tee says.

Bar-Cohen adds that the e-skin can also be used for making robots with “a superb sense of touch.”

Takei suggests the application of wearable electronics. “If we can really integrate circuits/sensors on the large-scale flexible substrates, we can wear the sensor with cloth and monitor our health,” he says.

One of the most intriguing applications is the possibility of creating an artificial membrane or replacement “skin” for people who have artificial limbs or severely damaged skin.

The Stanford researchers noted that development of e-skin is critical to biomedical applications such as prosthetic skin and also could lead to the realization of artificial intelligence directly connected to the human nervous system. 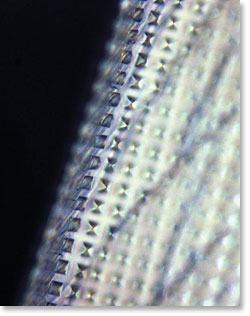 John Boland of the Centre for Research on Adaptive Nanostructures and Nanodevices at Trinity College in Dublin (Ireland) says that this will require the membrane to be wired to the nervous system of the wearer. While that is a big challenge, Boland says the research is nonetheless an important milestone in the development of ultrasensitive touch technologies.

“It is the application of these technologies to an important area that is so novel,” he says.

Both teams acknowledge there is still a lot to learn about how to create a smooth interface between the electronic sensor membrane and the nervous system.

“Next steps include actual integration on robotic devices and scaling up the sensor area,” Tee says.

“It will take a long time,” Takei says, “but if medical researchers find interest in e-skin, the time to realize real e-skin would be drastically decreased.”

Tell us your story

Articles in our Photonics for a Better World series highlight optics and photonics technologies that bring tangible gains to humanity.

Do you have a story to tell about the work that you or colleagues do to make the world a better place? Write to us at spieprofessional@spie.org

Beth Kelley
is a science and technology writer.
Recent News
Communications industry in the time of COVID
SPIE, the international society for optics and photonics, announces its 2021 society awards
Press Releases
Competing for space