The SPIE Awards Committee is pleased to announce the recipients of the 2010 awards.

SPIE member Juan Carlos Miñano, professor of electronics, optical communications, and optics at the Universidad Politecnica de Madrid (Spain) and a senior scientist at Light Prescriptions Innovators, is the 2010 recipient of the A.E. Conrady Award in recognition of his exceptional contributions in developing new design methods and devices in nonimaging optics.

Miñano, who leads a team that is developing the free-form Kohler integration array optics, one of the most advanced optical designs in nonimaging optics, is co-author of Non-Imaging Optics with Roland Winston and Pablo Benitez. 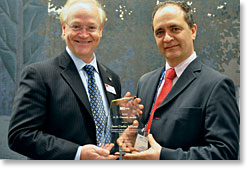 The book is truly a seminal publication for the field, says David G. Pelka, president of InteLED Corp. It codifies many design principles for LED lighting systems, LED backlights for LCD displays, as well as free-space telecommunication and concentrating photovoltaic applications.

Charles H. Townes, a Nobel Laureate, SPIE Fellow, and laser pioneer, is the 2010 recipient of the SPIE Gold Medal.

SPIE Fellow Akhlesh Lakhtakia, the Charles Godfrey Binder Professor of Engineering Science and Mechanics at Pennsylvania State University (USA) and editor-in-chief of the SPIE Journal of Nanophotonics, is the 2010 recipient of the SPIE Technology Achievement Award.

The award recognizes his conceptualization and development of sculptured thin films, his wide-ranging theoretical and experimental research in optics on these materials, and his characterization of them as nanoengineered metamaterials.

Lakhtakia has made important contributions to the study of the behavior of electromagnetic fields and waves in complex materials and media.

SPIE Fellow Mitsuo Takeda, president of the Optical Society of Japan and a professor at the University of Electro-Communications in Tokyo, is the 2010 winner of the Dennis Gabor Award. SPIE is recognizing him for contributions to the development of holography and optical metrology through the inventions of the Fourier transform method for fringe analysis and coherence holography.

In more than three decades of his career in the field of holography and optical metrology, Professor Takeda has done a lot of innovative work, as evidenced by the numerous papers found in his publication list, says Ichirou Yamaguchi, Scientist Emeritus of RIKEN. Takeda’s pioneering work in Fourier fringe analysis deserves special mention but Yamaguchi noted that Takeda’s contributions are interdisciplinary, encompassing a broad area of optical science and technology.

SPIE member J. Gary Eden, director of the Laboratory for Optical Physics and Engineering at the University of Illinois (USA), is the 2010 recipient of the Harold E. Edgerton Award.

He is being recognized for demonstrating optical techniques for observing physical phenomena, including his work in atomic, molecular, and ultrafast spectroscopy.

Eden pioneered an array of pulsed-laser techniques for ‘freezing’ the interaction of atoms and molecules.

He has developed optical techniques to observe physical phenomena that were not accessible previously, says SPIE Fellow Kanti Jain, a colleague at University of Illinois. This ability to observe ultrafast phenomena, such as the exchange of energy between two (or more) atoms as they interact, is a scientific advance worthy of Professor Edgerton’s legacy.

Nicholas M. Massa, a professor of Laser Electro-Optics Technology at Springfield Technical Community College in Massachusetts (USA), is the 2010 SPIE Educator Award winner for his two decades of contributions to optics and photonics education.

Massa has educated, mentored and prepared hundreds of students, teachers, and technicians; developed new instructional materials for his lab, and co-authored with 2003 SPIE Educator Award winner Judith Donnelly a user-friendly introductory optics textbook, Light: An Introduction to Optics and Photonics.

Massa has authored and coauthored numerous papers for SPIE, including many on optics education, and has served on the SPIE Education Committee and ETOP long-range planning committees.

His research group at Stanford focuses on novel materials and processing techniques for large-area and flexible electronic/photonic devices as well as ultrafast laser processing for electronics, photonics and biotechnology.

Salleo’s work in organic electronics involves the introduction of charge transport models in order to understand what limits the ultimate performance of these materials. He received his PhD at University of California, Berkeley, in 2001, and in less than five years at Stanford, his publications in organic electronics have been cumulatively cited more than 400 times. He has also been invited to write six review articles and book chapters.

University of Rochester (USA) professor Emil Wolf, an optics legend who formulated the modern theories of coherence and polarization of optical fields, has won the G.G. Stokes Award for a lifetime of achievements.

Wolf laid the foundation of contemporary physical optics by documenting the concept of spatial coherence before lasers were developed.

He is perhaps best known for his classic books, Principles of Optics: Electromagnetic Theory of Propagation, Interference and Diffraction of Light, written with Nobel Laureate Max Born, and Optical Coherence and Quantum Optics, co-authored by the late Leonard Mandel. Wolf has also written on a variety of topics ranging from medical imaging to astronomy to holography, and he won the Joseph Goodman Book Writing Award in 2008 for Introduction to the Theory of Coherence and Polarization of Light.

His publications have influenced many aspects of the discipline, and the correlation-induced shift he predicted is now called the Wolf Shift.

A lifetime of achievements in optical metrology has earned SPIE Fellow and past SPIE President James C. Wyant the Chandra S. Vikram Award. Wyant, dean of Optical Sciences at the University of Arizona (USA) and current president of the OSA, was recognized for his pioneering contributions to the field of quantitative interferometric optical testing and for nurturing the invention of phase-measuring interferometer systems.

Professor Wyant has made many outstanding contributions to the field of optical metrology as an educator, scientist, manager, and organizer of different activities for SPIE, says Maria J. Yzuel, SPIE President in 2009.

He holds 10 patents related to optical metrology and developed several new categories of interferometers. In addition to the phase-shifting interferometer, he invented the double-frequency grating shearing interferometer, interferometric sensors for adaptive optics systems, and the use of computer-generated holograms to test aspheric surfaces.

Wyant won the SPIE Technology Achievement Award in 1988 and the SPIE Gold Medal in 2003. His entrepreneurial activities include co-founding WYKO Corp., 4D Technology, and DMetrix. His experiences with starting up WYKO are described in the SPIE Press Book, Engineering a High-Tech Business: Entrepreneurial Experiences and Insights.

SPIE member Moustafa T. Chahine, chief scientist at the Jet Propulsion Laboratory (USA), is the 2010 winner of the George W. Goddard award in recognition of his exceptional achievement in optical science and instrumentation for aerospace and atmospheric research.

AIRS provides the highest accuracy and yield of any global carbon dioxide data set available to the research community, Chahine said in January when announcing the availability of daily global measurements of CO2 from AIRS. It will help researchers understand how this elusive, long-lived greenhouse gas is distributed and transported.

Chahine is being honored for developing an efficient inversion algorithm known as the ‘relaxation method’ to convert satellite radiances by the ingenious use of the radiative transfer equation to atmospheric variables, such as temperature, humidity, and fractional cloud cover, says David Tratt, of the Aerospace Corp.’s Space Science Applications Laboratory. This enabled the early satellites of the 1970s with infrared sounders to gather vital vertical profiles needed for advancing numerical weather prediction models.

Subsequently, Chahine formulated a multispectral approach using infrared and microwave data for remote sensing in the presence of clouds. These analysis techniques in 1980 produce the first global distribution of the Earth surface temperature using data from the High Resolution Infrared Radiation Sounder (HIRS) and the Microwave Sounding Unit (MSU).

SPIE member Marc David Levenson won the 2010 Frits Zernike Award for microlithography for one of the most important developments in lithography resolution enhancement, the phase-shifting mask (PSM).

Levenson’s pioneering development of PSM in 1982 extended optical lithography to once unheard-of levels of resolution and laid the groundwork for wavefront engineering technology.

His achievement in enabling sub-wavelength lithography also enabled the cost-effective progression of Moore’s law for the entire semiconductor industry.

Levenson is the owner of M.D. Levenson Consulting and is the litho and Design for Manufacturing (DFM) editor for BetaSights, an information service for the micro- and nano-device manufacturing industry.

The Frits Zernike Award is sponsored by Cymer and ASML.

The joint SPIE/OSA award recognizes the important role the book has played in the instruction and understanding of biomedical optics and its value as a resource for researchers in the field and for the next generation of scientists. Published by John Wiley & Sons in 2007, the book has been adopted by courses at top universities around the world.

Both authors are professors of biomedical engineering, and Wang is editor of the SPIE Journal of Biomedical Optics.

Biomedical Optics: Principles and Imaging is a good example of how knowledge can be gained through the coupling of information with numerical examples in the body of chapters and homework problems, says Orazio Svelto, chair of the award selection committee. The clarity and quality of work that Wang and Wu were able to convey ensures that this book is not only deserving of the Goodman Award but it also deserves its place as an important guide to introductory biomedical optics.

The Goodman Award is a biennial prize funded by a personal gift from SPIE Fellow Joseph W. and Hon Mai Goodman. It recognizes a recent and outstanding book in the field of optics and photonics that has contributed significantly to research, teaching, or the optics and photonics industry.

Goodman is author or co-author of several textbooks, himself. He is a past winner of the SPIE Gold Medal, an OSA Fellow, and past president of OSA.

SPIE encourages you to nominate a colleague for the Society’s annual awards, which recognize outstanding technical achievements by individuals and meritorious service to the Society.

Nominations may be made through 1 October and will be considered active for three years from the submission date.