Laser pioneer and SPIE Fellow Charles H. Townes is the recipient of the SPIE Gold Medal Award for 2010, a fitting tribute in the year that the international optics community celebrates the golden anniversary of the first demonstration of the laser.

The award honors Townes’ recognition of the potential of the laser and coherent light more than 50 years ago and his pursuit of the requisite scientific inquiry to turn lasers into one of the most disruptive technologies of the 21st century.

The SPIE Gold Medal also recognizes his pioneering scientific contributions to the fields of astrophysics, molecular spectroscopy, and optics in general.

Townes has been one of the most influential scientists in optics in the last 70 years. He holds the original patent for the maser and was the first to publish a description of the laser in 1958 in Physical Review with his brother-in-law Arthur Schawlow, Infrared and Optical Masers. In 1964, Townes, an American, shared the Nobel Prize in Physics with Russian scientists Nicolay Basov and Aleksandr Prokhorov for fundamental work in quantum electronics leading to the construction of oscillators and amplifiers based on the maser-laser principle. 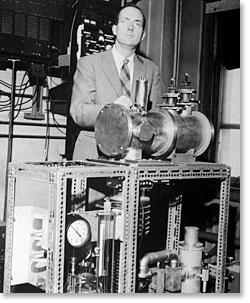 Townes is known for his work on the theory and application of the maser, on which he received the fundamental patent, and other work in quantum electronics connected with both maser and laser devices.

During his distinguished career, Townes was also part of a team at University of California, Berkeley, that detected the first complex molecules in interstellar media and first measured the mass of the black hole in the center of our galaxy. He has contributed to and created new branches of science and trained numerous students and scientists.

"It could not be more fitting that we bestow our Society’s highest honor on the person whose invention of the concept of the maser and the laser has had more impact on the technologies that drive our Society and our members than any other," said M.J. Soileau, vice president for Research & Commercialization at the School of Optics and Photonics (CREOL) at the University of Central Florida, and the SPIE 2008 Gold Medal award winner.

Townes has received numerous other awards, including more than 20 honorary degrees, is an honorary member of many national and internationals scientific societies, and has received many of their highest awards. Townes has authored numerous papers, and he has served as symposium chair and presenter at several SPIE meetings.

"I appreciate this award very much," says Townes, who will officially accept the award in August at SPIE Optics+Photonics. "It’s a great honor."

From maser to laser

After receiving his PhD in physics from California Institute of Technology in 1939, Townes worked on several radar projects at Bell Labs during World War II before taking on the challenge of controlling electromagnetic waves at Columbia University, where he was appointed to the faculty in 1948.

Townes says he and his research team at Columbia toured labs around the United States in their struggle to learn how to apply a microwave technique used in his wartime radar research to spectroscopy.

On a morning in 1951 when he was supposed to present his findings—of which he had none—to a government panel in Washington, DC, Townes got up early and was sitting on a park bench just about to give up, when the answer came to him. He wrote his ideas and calculations on the back of an envelope and later patented the idea for the maser, a term he and his students coined for microwave amplification by stimulated emission of radiation.

He then began trying to build a working maser. After a couple of years, however, his supervisors at Columbia told him it was a waste of time.

"Fortunately I was an associate professor by then, and they couldn’t fire me just for being stupid," Townes says with a laugh. "Three months later, we had it up and running." Together with Columbia colleagues James Gordon and Herbert Zeiger, he demonstrated the first working maser in 1954, using ammonia gas as the active medium.

After Townes and Schawlow published their groundbreaking paper in Physical Review, they attempted to create a functioning laser themselves, "but Maiman beat me to it," he says, referring to Theodore Maiman’s demonstration of the first working laser on 16 May 1960.

Laser technology has since developed into a U.S. $6 billion industry that affects a multitude of technologies and many aspects of modern life. Townes is excited to see how far the laser has come.

"I’m just delighted how many people are contributing so much to the laser and its applications," he says.

A professor at Berkeley since 1967, Townes currently works with the Infrared Spatial Interferometer (ISI) Array. The ISI array is made up of three movable, ground-based telescopes. By placing the telescopes at varying distances apart, from 4–70 meters, and combining the data, the array can obtain similar resolution as a telescope as large as that separation in a perfect atmosphere.

Townes says he focuses his research today on aging supergiant stars. Supergiants like Betelgeuse and Mira are further along in their life-cycle. As they decay, they emit dust grains that absorb visible light and re-radiate this energy in the infrared region of the spectrum. The ISI array is well suited to measure this stardust; most of this dust forms within a small volume around the stars. The ISI team has observed motion of material around a number of stars, some with very irregular patterns.

"Betelgeuse is very irregular, for example," Townes says. "Nobody thought it was changing and now we find over the last 15 years it’s been gradually decreasing in size. Very strange." Townes has also been able to measure the regular emission pattern of Mira, supporting mathematical models that attempt to explain its perceived growing and shrinking pattern.

"We are currently extending the potentiality of our interferometer so we can make more measurements faster and in more detail. We’ll be able to measure the molecules around stars and the stars themselves at the same time," Townes says.

Townes has also been using heterodyne detection. "It’s very common in the radio range, but it had never been used in the optical or infrared range (for this application). Now I’m using it on these telescopes, and that gives us some advantages. It gives us very narrow bandwidths of frequencies, which allows us to make much more precise measurements."

Not all of the projects Townes has worked on throughout his life have been as successful as the maser. During World War II, he says, "We were working on a radar system at wavelengths of about half an inch. It was the shortest wavelength that had been used so far. And then we discovered that wavelength was absorbed by water vapor in the air. So the waves couldn’t get through the atmosphere, and that was a big mistake and we had to give up."

"On the other hand," Townes says, "that was part of the thing that led me into microwave spectroscopy, because I realized this is some spectra of molecules in the microwave region and we can measure them very precisely."

Even though Townes is still actively working, he doesn’t see himself breaking into new territory anytime soon. "I’m almost 95 years old now, and I don’t think I’m going to start a completely new field again. I think it’s about time I have to bow out. I’m really starting to feel my age."

Townes continues to be fascinated by the new connections science is making, from biophysics to astronomy to lasers. "The more we explore the more we find out, and the more interesting things come out of it. The laser, for example, came out of exploring spectroscopy and new ways of doing spectroscopy."

Townes says "This is a really remarkable universe that we’re in, really fantastic. The laws of physics are just right for us to be here. And how did life begin? There are so many fascinating puzzles. It’s a fascinating universe, and a remarkable one, and I think we need to appreciate it."

The SPIE Gold Medal is the highest honor the Society bestows and comes with a $10,000 honorarium.

Beginning in 1977, it has been awarded annually in recognition of outstanding engineering or scientific accomplishments in optics, electro-optics, or photographic technologies or applications.

SPIE Gold Medal recipient Charles Townes, who turns 95 on 28 July, will speak at the SPIE Optics+Photonics awards banquet on 4 August about "The Sizes, Shapes, and Changes of Old Stars."

Townes will discuss some of the work his team at University of California, Berkeley, has done on measuring the dust emitted by older stars like Alpha Orionis (Betelgeuse), Alpha Scorpii (Antares), and Alpha Herculis, a multiple star in the constellation Hercules.

These old stars are very active and changing rapidly. He will report on the IR interferometry used to measure these changes.

1964: Townes shared the Nobel Prize in Physics with Russian scientists Nicolay Basov and Aleksandr Prokhorov for the 1958 invention of the maser.

1999: Ahmed Zewail of CalTech won the Chemistry Prize for showing that it is possible with rapid laser technique to see how atoms in a molecule move during a chemical reaction.

2001: Americans Eric Cornell, Wolfgang Ketterle, and Carl E. Wieman shared the Physics Prize for the achievement of Bose-Einstein condensation in dilute gases of alkali atoms, and for early fundamental studies of the properties of the condensates.

SPIE is celebrating 50 years of the laser. Read about the history of the laser and the challenges along the way, including Townes' contributions, in a 2009 SPIE Professional article by Jeff Hecht.

Beth Kelley
Beth Kelley is a contributing writer and editor to SPIE.