Passive THz imaging may be an alternative to controversial airport body scanners.
01 July 2010
Torsten May, Hans-Georg Meyer and Jürgen Popp

In recent years, body scanner technologies based on x-ray or millimeter waves (MMW) have been shown to improve security in areas sensitive to terroristic attacks such as airports.1 However, even if the need for such measures is evident, such technologies raise health and privacy concerns, especially since the body-scanners recently installed in airports in Europe, the United States, and elsewhere see through clothing and reveal clear outlines of passengers’ anatomies.

Although these scanning technologies are said to be harmless, a residual risk remains, according to a recent study on genotoxic effects of active MMW body-scanner radiation.2 Therefore, a high-level security tool which eliminates the health concerns and addresses privacy issues would be highly beneficial.

A promising solution for this problem was first reported at SPIE Defense, Security, and Sensing in 2008: a passive terahertz (THz) security camera.3 This technology senses the heat emission from a human body to visualize hidden hazardous objects like weapons or explosives. Although this approach uses the same type of radiation as active MMW imagers, the lack of artificial illumination dispels any risk for health. Moreover, because a passive thermal imager records temperature variations rather than body shapes, such systems generate pictures that are less revealing than those in current use.

In technical terms, the band of operation for this technology is narrowed by physical constraints. That is because damping of THz waves in atmosphere and textiles strongly accumulates at frequencies above 1 THz, while at low frequencies, the optical resolution of THz images worsens because of diffraction.

In lab experiments and simulations, a good compromise is to operate the camera in the 0.35 THz atmospheric window, which is about 0.04 THz wide and where the attenuation of propagating electromagnetic waves is as low as 10 dB/km.

Consequently, it is possible to construct a sub-THz camera that visualizes a person’s body heat from a distance of a few meters. However, because of the large corresponding wavelength (870 µm), the diffraction-limited spatial resolution is an issue which requires the use of sizable optics.

The demonstrator (shown below) built at the Institute of Photonic Technology Jena (IPHT) uses Cassegrain-type reflective optics with a 50-cm aperture, allowing for a spatial resolution of about 1 cm at a distance of 5 m. 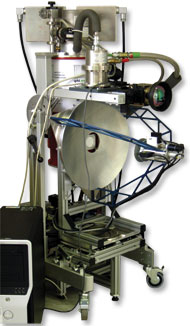 Prototype of the terahertz security camera assembled at IPHT. Optical components (Cassegrain mirrors) are shown in front and the pulse-tube cooler at rear. A rotating mirror is tilted around the vertex, resulting in a spiral scanning of the person or object.
Sensitivity challenge

The scientific challenge of using a passive imaging technology is to achieve enough sensitivity in the detector to identify weapons and other hidden hazardous materials.

For example, the visualization of a radiometric contrast of a human body with 35° C against a background at 20° C with 8-bit color depth (about 0.06° C temperature difference) means that a useful detector has to resolve a power difference of 50 fW while receiving a constant power load of about 150 pW.

The coverage of these specifications by room-temperature detectors would require complex heterodyne receivers or – in case of incoherent detection – unacceptable integration times. With the commercial availability of sophisticated cooler technologies, another option would be to use cold direct detectors with sufficient sensitivity to achieve the required power resolution. 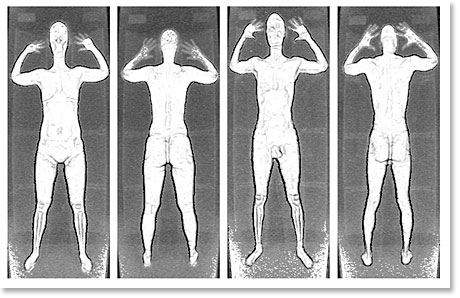 Backscatter technology produces images that resemble a chalk etching and reveal outlines of the anatomy. Photo by TSA. 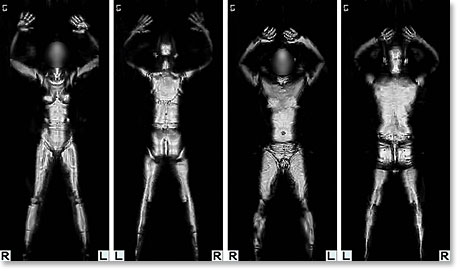 Millimeter wave technology produces whole body images (woman at left, man at right) that reveal outlines of a person’s anatomy as well as concealed objects such as weapons and explosives. Photo by TSA.
IPHT prototype

Such a receiver developed at IPHT works at low temperatures (0.3 K) achieved by a two-stage, pulse-tube cooler (PTC).4 The PTC technology is based on a Stirling process utilizing pressure impulses. Although single-stage implementations have been in routine use for many years, e.g., for cooling infrared focal plane arrays, emerging two-stage devices are achieving cryogenic temperatures well below 4 K.

The IPHT detector is based on the concept of the transition-edge bolometer.5 A dipole antenna absorber is placed on a 1-mm-thick silicon nitride membrane. Because of its low thermal conductivity of about 10 nW/K, this membrane ensures a measurable radiation-induced temperature increase in case of an incoming radiation signal. To quantify the absorbed power, a superconductor—electrically operated in its transition to normal conductivity—transforms the absorbed heat into an electrical current. The current signal is measured by an ultra-low noise superconducting quantum interference device (SQUID).

The IPHT detector is a third-generation camera that uses a receiver with 20 sensors. Such a small number of detectors is about the limit for an economically priced scanning system. However, recent detector research focuses on the development of larger arrays with appropriate multiplexed readout schemes, and these types of focal plane arrays without scanning may become the most cost-effective option in the future.

In the meantime, current systems demand two-dimensional scanning since the instantaneous field of view of the receiver is by a factor of five smaller than the desired full field which covers a complete human body. The scanning is accomplished by a tilt of the secondary mirror which changes the line of sight while the tilted mirror is rotated around the main axis of the optics.

This design keeps the forces originated by the notable inertial mass of the mirror small. However, the sampling following spiral traces results in non-uniform pixel distribution, and that requires accurate image processing.

Fast, 24-bit data-acquisition electronics were developed in-house to record the 20 detector channels and coordinates of the scanner mechanism. A personal computer translates the data set into an orthogonal grid and creates the image. The computer also controls all main functions of the camera.

The thermal images below show the THz camera at work. One of the obvious features of passive THz technology is that the images show a human body as a thermal map without anatomic features. Objects with different THz emission characteristics are clearly indicated in front of the person and underneath clothing. Metallic objects, for instance, almost completely block body emission while reflecting the (colder) background. 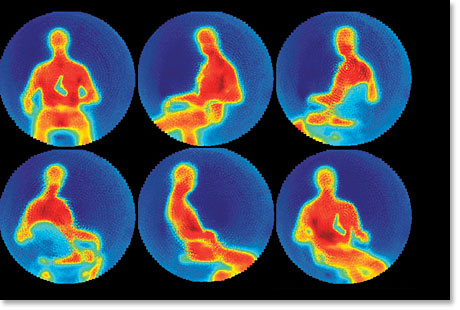 Freeze images from a movie with a 4-Hz frame rate show a person sitting on a lab chair. A handgun mock-up is hidden under clothing, in upper left and lower right. Photos courtesy of IPHT

To a certain degree, the same is true for ceramics, whose reflectivity is smaller but still sufficient. The detection of substances which absorb and emit THz radiation, such as common explosives and many organic compounds, is more challenging. However, a THz camera can usually see such concealed substances when operating in a spectrum known to detect their fingerprint characteristics, typically the 0.35 THz band.

The THz camera developed at IPHT is able to record images with a frame rate of up to 10 Hz. That is close to video but not sufficient to image a person passing the camera at a walking pace without motion blurring. For that reason, the forthcoming fourth-generation camera will use a receiver with 50 detectors to achieve full video rate at 25 Hz.

The ability of a THz camera to recognize objects of various compositions appears to be better than established security technologies like metal detectors.

If the next-generation THz camera can be shown to be significantly better at airport security and protecting critical infrastructure, it is well positioned to replace older technologies in the market.

Stripping for the camera?

The MMW security systems currently in use in many airports bounce radio-frequency waves off people to construct a 3D image quickly. Backscatter units also in use employ x-ray scanning. In both of these systems, facial features are intentionally blurred when security personnel view an image, but anatomical details are clear, leading some opponents to say the scanners are conducting a virtual strip search.

Hans-George Meyer is head of the Quantum Detection Department at IPHT. He is a co-author of a paper presented at SPIE Defense, Security, and Sensing in April about a security system called Safe, Visible, Infrared, and Terahertz Object Recognition, or Safe VISITOR.