Smile at the Moon

Smile! Students of all ages and from across the globe get hands-on astronomy learning.
01 April 2010
Beth Kelley

Smiley is a 4.6-meter radio telescope tucked up in the hills of western North Carolina (USA). Hundreds of students from all over the world have remotely accessed and manipulated the parabolic dish with a big "smiley face," yet most of them are too young to get a driver's license. 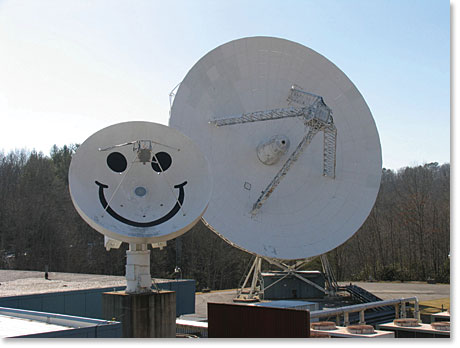 Smiley is a radio telescope used remotely by students as far away as Australia. Photo courtesy of PARI.

The telescope is one of seven used for research and education at the Pisgah Astronomical Research Institute (PARI), an astronomical observatory that works with an extensive network of schools and colleges to provide first-hand experiences to students from kindergarten through graduate school.

Originally a satellite tracking site for NASA, in 1995 the site was turned over to the U.S. Forest Service, with some of the large radio antennas, optical telescopes, and tunnel-connected buildings still operational. When the government began discussing the site's future, Don Cline, founder and president of PARI, saw the opportunity.

Cline has been an active advocate for astronomy and science education. Cline worked for Bell Labs from 1959, leaving in 1977 to form Micro Computer Systems (MCS), which was sold to Harris Corp. in 1995. Cline founded PARI in 1998. In January 1999, the 200-acre site was acquired, and the PARI programs began.

Educators at PARI firmly believe in a hands-on, applied, inquiry-based approach to learning, particularly for science, technology, engineering, and mathematics (STEM). One example is Smiley.

"We wanted the access to the telescope [Smiley] to include real-time control, rather than a robotic system where the user enters the name of an object—say the Moon—and the telescope does all the work," says Michael Castelaz, science director at PARI. "With Smiley, the students and teacher point the telescope and take data in the same way professional astronomers work. By working this way, students need to think critically and develop their problem-solving skills."

The main users of Smiley are about 500 youngsters in North Carolina and elsewhere in the United States, but undergraduate researchers from across the world also use the popular telescope by remote control to study the rotation of the Milky Way.

Another PARI program, the Space Science Lab, brings in 30 high school students from western North Carolina each year to build telescopes and use them to contribute to ongoing solar and lunar research. 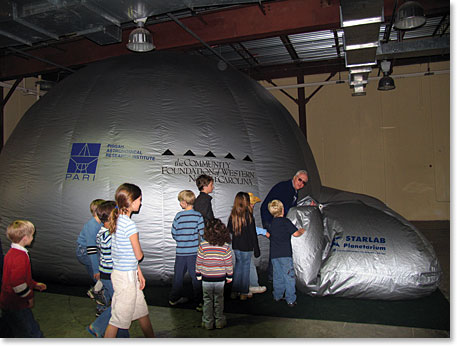 StarLab is a portable planetarium that PARI uses to integrate astronomy into math, science, and social studies lessons and for public outreach programs. Groups of up to 35 people can fit inside the dome.Photo courtesy of PARI.

"The Space Science Lab program gives ownership of science investigation to the young scientist who builds and maintains and uses the instrument," says Christi Whitworth, education director at PARI. "It has produced confidence in students who would not normally be given the opportunity to pursue science on their own."

The students are trained using some of the activities and techniques taught in SPIE's Hands-on-Optics program.

"PARI fills a vital role for students from kindergarten through the 12th grade by providing real experiences in science," Whitworth says. "Our nontraditional, inquiry-based, hands-on programs literally take education out of the classroom. As a result of their work at PARI, students are excited by science and begin to seriously consider careers in science and technology."

Not Just for Kids

Students of all ages share the same equipment for experiments and the same data from PARI's archives.

"Activities such as these open science not only to the youngest participants but often bring family awareness of STEM fields and opportunities in these fields," Whitworth notes. "I have found that when parents and other significant family members make learning science a priority for a child, the child's response tends to embrace this attitude toward learning everything."

As young people are learning the basics, advanced students, professional researchers, and other adults come to PARI in person or through its Web site to study the spectra of stars, pore through its collection of some 2 million astronomical images taken generations ago, and to conduct other research.

Astronomers Rene and Lukas Hudec from the Astronomical Institute of the Academy of Sciences of the Czech Republic, for instance, are studying the spectra of stars and galaxies using photographic images stored in the PARI Astronomical Photographic Data Archive (APDA). The archive is a home for time-domain astronomy and is extremely valuable to astronomers who must go back in time to research objects that were viewed by previous generations of astronomers. The archive includes 50,000 glass plates, some dating back to 1911, and 40,000 films of an all-sky survey done about 50 years ago where 50 degrees of the sky was repeatedly imaged every night with two telescopes in search of meteors.

The Hudecs will use the results of their research at PARI in combination with data to be taken by the European Space Agency GAIA Space Telescope, which is expected to launch in 2012. Rene Hudec is an active participant at SPIE meetings, including SPIE Astronomical Telescopes and Instrumentation and SPIE Optics and Optoelectronics.

"PARI is a great site for experimentation for both its radio quiet and light quiet," says Patrick Gardner, principal investigator for the Charles S. Draper Laboratories in Florida, who has taken several groups to PARI to conduct experiments.

Gardner is also an adjunct professor at Western Carolina University where administrators are coordinating with PARI to support senior engineering majors with an interest in optics or mechanical design who could use PARI for their final, capstone project.

"It's an incredible educational site for radio and optical imaging in space," Gardner says.

PARI is a non-profit astronomical research foundation dedicated to providing hands-on educational and research opportunities for a broad cross-section of scientists and students.

It is a dark-sky location for astronomy, located in the Pisgah National Forest in North Carolina on the site of NASA's former Rosman Research Station. The research station was one of NASA's first satellite tracking facilities.

After it was closed in 1995, Don Cline, a former Bell Labs engineer, along with other science and business leaders, formed PARI. They acquired the 200-acre facility and its instruments in the hope of inspiring collaboration of scientists of all ages.

Why Is This Telescope Smiling?

NASA workers painted the smiley face on the surface of the dish as a friendly wave to Soviet satellites during the Cold War era.

Today, Smiley is used remotely over the Internet for radio astronomy by students and their teachers. PARI conducts workshops to certify the teachers and has developed several lab exercises teachers use in their classrooms.

About 500 teachers and students have been certified and Smiley has been used by more than 3,000 students, some as far away as Australia.

Beth Kelley is an SPIE editor.