The roots of modern laser technology go back to a burst of innovation in the years following Theodore Maiman's demonstration of the ruby laser in 1960. Most major types of lasers were first demonstrated in those early years, but their technology has advanced greatly since then and today is on a roll.

Lasers have achieved an amazing diversity in their first half century. Red laser pointers are commonplace as cat toys, trade-show giveaways, or bar-code readers in supermarkets. Hundreds of millions of diode lasers are mass-produced each year, vital parts of common consumer products like CD and DVD players.

Argon-fluoride excimer lasers, a type developed in the 1970s, perform refractive surgery and write the patterns on state-of-the-art electronic chips. And the defense industry has innovated with both small and giant lasers for range-finding and weapons.

Efforts to develop the first laser focused on three approaches to producing the population inversion needed to generate stimulated emission:

Maiman succeeded in optical pumping of ruby because he understood the material and recognized that flashlamps could provide the high pump intensity needed to produce a population inversion in ruby, a three-level laser.

The first to extend Maiman's work were Peter Sorokin and Mirek Stevenson at the IBM T. J. Watson Research Laboratory (USA). They used flashlamp pumping to demonstrate the first four-level laser, uranium in calcium-fluoride crystals in November 1960. Because ruby is a three-level laser, with its lower laser level in the ground state, more than half of the light-emitting chromium atoms must be excited to produce a population inversion.

The next big step in solid-state lasers was laser action on the 1.06-micrometer line of neodymium. The first demonstration was Nd-doped calcium tungstate, demonstrated in 1961 by L.F. Johnson and K. Nassau at Bell Labs (USA). Later that year, Elias Snitzer at American Optical showed that a thin glass rod doped with neodymium also could lase. Neodymium had particularly good laser properties; developers studied many other crystalline hosts.

The winner of the first round of laser crystal development was Nd-doped YAG, with laser action first demonstrated in 1964 by J. E. Geusic, H. M. Marcus and L. G. Van Uitert of Bell Labs.

Snitzer's work also sowed the seeds for another technology that would blossom much later: fiber lasers. American Optical had hired him to work on fiber optics, and his first efforts to demonstrate lasers had been in optical fibers with their cores doped with rare earth elements.

His neodymium-glass laser was essentially a thick fiber. Later he demonstrated that a length of neodymium-doped glass could amplify a signal: the first optical amplifier. But many years would pass before those applications took off. 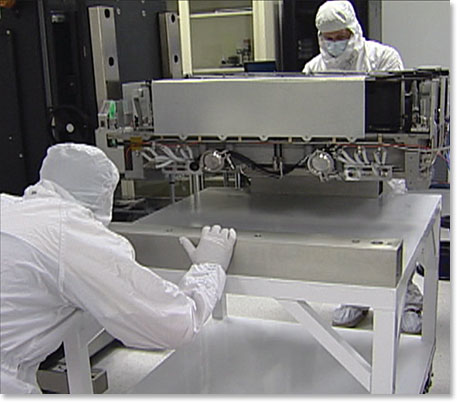 The first continuous-wave laser was demonstrated 12 December 1960 by Ali Javan, William Bennett, and Donald Herriott at Bell Labs. They used an electric discharge to excite a mixture of helium and neon to emit on the 1.15-µm line of neon. The experiment was a tough one and took nearly a year for others to replicate. But being able to generate a coherent beam made it possible to align flat-cavity mirrors parallel with each other in a Fabry-Perot cavity, making it easier to demonstrate other gas lasers.

The next big step in gas lasers came in 1962 when Alan White and J. Dane Rigden made a He-Ne laser oscillating on the 632.8-nanometer red transition. A visible continuous-wave laser opened the door to many new applications.

Other types of discharge-powered gas lasers soon followed. In 1963, C. Kumar N. Patel of Bell Labs decided that exciting laser action on vibrational transitions of molecules should produce higher power than atomic transitions. His first choice was carbon dioxide, and on his first try he got tens of milliwatts on the 10.6-µm line, a big increment for early gas lasers.

Adding nitrogen raised the output to 10 watts, enough to attract military interest. Military contractors built giant versions, eventually reaching 8.8 kilowatts in a monster with a 230-meter beam path. The breakthrough to tens of kilowatts came when Ed Gerry and Arthur Kantrowitz of the Avco Everett Research Laboratory (USA) demonstrated the gas-dynamic CO2 laser in 1966, a development that remained classified until 1970, when those lasers reached 100 kW.

However, in 1966 Sorokin showed that organic dyes dissolved in liquids could be optically pumped, and Bernard Soffer at Korad (USA) soon took advantage of dyes' broad bandwidth to develop dye lasers tunable across a broad range, leading to breakthroughs in laser spectroscopy.

Semiconductor diode lasers were late bloomers. Robert Hall of the General Electric R&D Labs made the first one in 1962 and was followed within weeks by three other groups. But their lasers required cryogenic cooling and couldn't emit continuously. It wasn't until 1970 that development of semiconductor heterojunctions allowed room temperature operation for a few seconds, with Zhores Alferov of Russia's Ioffee Institute narrowly beating Bell Labs.

It took more years of painstaking development to extend lifetimes enough to make diode lasers usable. When Laser Diode Laboratories (USA) introduced the first commercial room-temperature CW diode laser in 1975, it was rated to emit around a few milliwatts for a few thousand hours, and cost a few thousand dollars (US).

By then, diode laser technology was advancing rapidly, powered by interest in fiber-optic communication systems. The first generation of fiber-optic systems used gallium-arsenide lasers emitting at 850 nanometers, but just as Bell Labs reported extrapolated lifetimes of a million hours for GaAs lasers, Masaharu Horiguchi of NTT (Japan) opened lower-loss fiber windows at 1300 and 1550 nm. J. Jim Hseih of MIT Lincoln Laboratory (USA) developed InGaAsP diode lasers emitting in those windows, then started his own company, Lasertron, to manufacture them.

GaAs lasers found different niches. The biggest one in numbers is optical data storage on audio CDs and CD-ROMs. GaAs lasers also can be assembled into closely packed arrays that when cooled can crank out kilowatts of light.

The range of diode-laser applications is broad and amazing at both extremes. It's remarkable to see diode-pumped, frequency-doubled neodymium lasers packaged in pen-sized, battery-powered green laser pointers available on the Internet for under $50 US.

Early this year, Northrop Grumman demonstrated a massive diode-pumped neodymium laser that generated a 105-kW beam for five solid minutes. The next steps in the military-sponsored program are field trials against potential targets and developing a version compact enough to be used as a plane- or truck-mounted high-energy laser weapon.

Diode pumping and fiber-optic communications also helped fiber lasers into the mainstream. David Payne's experiments with erbium-fiber lasers at Southampton University (UK) led to the development of fiber amplifiers for the 1550-nm communications window, where they became part of the backbone of the global telecommunications network. Meanwhile, ytterbium-doped fiber lasers emitting have carved out a niche in industrial materials processing, delivering hundreds or thousands of watts.

IPG Photonics (USA) just reported a staggering 10 kilowatts from a single-mode fiber laser. Multimode fiber lasers have reached 50 kW, andincredible as it seemsare in the running for use as short-range laser weapons because of their small size and high efficiency.

In contrast to some of the larger laser systems, IPG Photonics has a new diode laser for plastic and metal welding, brazing, cladding, and medical applications that comes in the smallest package available on the market. This laser offers a choice of wavelengths across the 9xx nm spectral range and delivers 100W power out of a 0.12 NA, 105-µm core fiber.
Innovation and Diversity

Research lasers are also amazingly sophisticated tools. Titanium-sapphire lasers, pumped by diode-pumped frequency-doubled neodymium lasers, can generate trains of femtosecond pulses which can be manipulated to become a femtosecond frequency comb, spanning more than an octave in frequency and able to measure optical frequencies with amazing accuracy. They are likely to become the basis of tomorrow's optical clocks and new generations of precision measurements.

The Linac Coherent Light Source, a free-electron laser built in the two-mile linear accelerator at the Stanford Linear Accelerator Center, will generate the most intense and most coherent hard x-ray pulses ever available to study the properties of atoms and materials. (See FEL Transformation article.)

The future will see more growth in laser applications from esoteric research to seemingly mundane components of consumer products. Manufacturers are turning out more types of lasers that make new wavelengths available from the ultraviolet and visible to the terahertz range.

The industry faces formidable challenges, including developing shorter-wavelength light sources to write finer details onto semiconductor chips. There may be bumps in the road, but laser innovation is charging ahead after half a century.

The SPIE Newsroom has the latest technical articles, product updates, and video interviews about laser technologies. Go to spie.org/news-lasers.

Optipedia also has free articles about lasers, including an excerpt from the Field Guide to Lasers.

SPIE is celebrating laser technology during the run-up to the 50th anniversary in 2010 of the first demonstration of a working laser.

The SPIE Advancing the Laser tribute looks at the rich array of applications for the technology and includes a Web site (spie.org/advancingthelaser) with articles by and about past and current laser luminaries and special activities throughout the year. A major salute to laser technology will be held in January 2010 during SPIE Photonics West in San Francisco with displays of early laser equipment, a festive reception embellished with laser displays, and technical and other events celebrating laser technology.

SPIE is also a founding partner and sponsor with OSA and APS of LaserFest (laserfest.org), with outreach activities for the general public and K-12 students and educators.

LaserFest will recognize the accomplishments of the pioneers who made possible the discovery, development, and application of the laser as well as inform students, educators, legislators, funding agencies, and the general public about the impact of the laser and the importance of scientific and technological innovation.

Jeff Hecht
Jeff Hecht is a science and technology writer who has previously written about lasers for SPIE Professional. He is author of "Laser Pioneers" and "Beam."

Have a question or comment about this article? Write to us at spieprofessional@spie.org