Theodore Maiman listed five major areas where he expected lasers to be used when he reported demonstrating the first laser at a July 7, 1960 press conference organized by Hughes Research Laboratories. As we approach the 50th anniversary of the laser, his picks seem prophetic:

• Probing the nature of matter

• Increasing the number of communications channels

• Concentrating light for applications in chemistry, industry, and medicine

The common thread behind his choices was the laser’s ability to generate coherent light. Previously coherence had been limited to the radio spectrum, where it was important for radar and communications.

At the press conference, Maiman said that coherence at the much higher frequencies in the optical spectrum could vastly increase the number of communication channels and greatly enhance radar resolution and range. 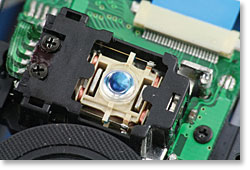 The Air Force quickly gave Hughes a contract for Maiman to build bigger and better lasers for optical radars. That launched the development of laser range finders, which fire a laser pulse at an enemy target, measure its distance by timing how long the pulse takes to return. The next step in military lasers was development of target designators, which mark targets with laser signals coded for recognition by smart bombs.

Laser rangefinders and designators remain in modern military arsenals, although eye-safe lasers have replaced ruby to protect the vision of soldiers in training exercises, and remotely controlled robotic aircraft have begun wielding the latest designators.

Newer instruments based on laser radars are widely used to measure atmospheric properties. A recent National Research Council report recommended deploying laser radars at some 400 sites around the United States to pinpoint the boundary between air circulation near the surface and at higher elevations, data vital for weather forecasts but hard to obtain otherwise.

Laser signals have become the backbone of the global telecommunications network, but the systems transmitting the light differ greatly from the 1960 vision of beams through the air. Months after Maiman’s announcement, Bell Labs scientists hauled their own ruby laser to the top of a radar tower in Murray Hill, NJ, and fired pulses toward another Bell tower on their line of sight in Crawford Hill, 25 miles away. The Bell team needed solar filters and sensitive detectors, but they did spot the red pulses.

After transmission in open air proved problematic, Bell turned to confocal optical waveguides, hollow pipes with regularly spaced heaters that made air act as a lens to focus the light along the tube. It was a logical step from the hollow waveguides Bell had developed for long-distance transmission of millimeter waves. But both technologies proved to be pipe dreams.

Scientists at the Ioffe Physics Institute in what is now St. Petersburg (Russia) and at Bell Labs independently demonstrated continuous emission from semiconductor lasers at room temperature.

The Corning Glass Works followed with the first low-loss optical fibers. Corning’s first fibers were too fragile for telecommunications, but within two years Corning had made more durable and even clearer fibers. A series of fiber-optic field trials blew away the waveguides, clearing the future for fiber.

Optical communication boomed in the 1980s, as MCI, AT&T, and Sprint laid fiber-optic backbones for their telephone networks across America. Fiber transmission soared from 45 megabits per second in the first commercial systems to 2.5 gigabits per second—a staggering 32,000 simultaneous conversations—by the early 1990s. In 1988, AT&T, with partners in Britain and France, laid TAT-8, the first fiber-optic cable to cross the Atlantic.

Yet even as TAT-8’s crystal-clear signals were changing the course of global communications, David Payne at the University of Southampton and Emmanuel Desurvire at Bell Labs were developing the all-optical amplifiers that would make it obsolete.

To cross the ocean, TAT-8 needed repeaters about every 65 kilometers that converted the attenuated optical signal to electronic form, amplified it, then converted it back to light. But the new erbium-doped fiber amplifiers directly amplified the weak optical signals, avoiding the need for complex electronic repeaters. Better yet, erbium amplifiers can simultaneously boost the strengths of separate signals across a range of wavelengths, allowing each fiber to carry signals at many different wavelengths.

Today, wavelength-division multiplexing is standard in the global telecommunication system that carries the Internet as well as telephone traffic. 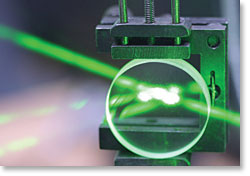 The space race was hot in 1960, so it was natural for Maiman to mention lasers for space communications. Indeed, NASA astronauts tested laser transmission from the ground to Gemini capsules in the mid-1960s. But the high directivity of the laser beam that initially seemed so attractive to span long distances in space wound up making it hard to point the beam reliably at the receiver.

NASA and the U.S. Air Force struggled for long years with the problems, but the past decade has seen a series of successful demonstrations.

Lasers have sent signals between satellites and between the Earth and the Messenger mission to Mercury when it was 24 million kilometers away. NASA even planned a 1- to 30-megabit per second laser link to Mars until a 2005 budget crunch forced cancellation of the Mars Telecommunications Orbiter.

Looking for a Problem

Soon after Maiman demonstrated the laser, his assistant Irnee D’Haenens joked that the laser was “a solution looking for a problem.” Since then, lasers have found many unexpected problems to solve.

One example is holography. Nobel laureate Dennis Gabor proposed the idea of recording the phase of light waves as well as their amplitude in 1948 as a way to improve electron microscope imaging.

He and a small group of others spent several years afterwards trying to develop the idea, but they made only limited progress, and by the late 1950s little work was being done in the field.

Emmett Leith independently came upon the same concepts in the mid-1950s while developing synthetic-aperture radar in a classified project at the University of Michigan’s Willow Run Laboratory. He made a crucial advance by devising a configuration that avoided the superposition of a pair of images that had limited Gabor’s early holograms to small flat objects.

When Leith tried to extend his work to three dimensions, he turned to a helium-neon laser for its long coherence length, and he stunned the optical community with fully three-dimensional reconstructions.

Although Maiman had predicted laser beams might be used for medical treatment, no one had anticipated the wide variety of laser treatments that would be developed. Charles Townes, who described laser theory with Arthur Schawlow in a pioneering 1958 paper, initially expected only limited applications. But he was soon pleasantly surprised by developments in eye treatment.

“It’s very rewarding to know that my friends’ eyes have been saved by lasers,” he recalled in the 1980s.

Lasers also perform cosmetic treatments, ironing out wrinkles and removing unwanted hair. But some medical applications have not lived up to initial hopes, such as using laser beams to clean out clogged arteries.

The most fascinating surprises have come on the research frontier. Developments including femtosecond spectroscopy, laser trapping and cooling of atoms, production of Bose-Einstein condensates (sometimes called “atom lasers”), and femtosecond frequency combs have earned Nobel Prizes.

The high intensities of laser beams opened the door to nonlinear optics. Lasers can generate pulses lasting less than a femtosecond, produce pulses with peak energy of petawatts, and accelerate charged particles.

Space scientists have even proposed using lasers to gently nudge asteroids away from potentially dangerous orbits that might hit the Earth.

The first half-century of lasers has taken us a long way, and we can look forward to much more in the next half-century.

1964: American Charles Townes shared the Nobel Prize in Physics with Russian scientists Nicolay Basov and Aleksandr Prokhorov for the 1958 invention of the maser.

1999: Ahmed Zewail of CalTech won the Chemistry Prize for showing that it is possible with rapid laser technique to see how atoms in a molecule move during a chemical reaction.

2001: Americans Eric Cornell, Wolfgang Ketterle, and Carl E. Wieman shared the Physics Prize for the achievement of Bose-Einstein condensation in dilute gases of alkali atoms, and for early fundamental studies of the properties of the condensates.

Do you or your company have an early laser? A story about the early pioneers to share? Or other artifacts from the invention and development of this technological achievement?

Share them with SPIE as we celebrate the 50th anniversary of the working laser. Several special events are planned for SPIE Photonics West in 2010. Write to spieprofessional@spie.org.

Jeff Hecht is a science and technology writer and author of Laser Pioneers and Beam. An excerpt from Laser Pioneers is available from a previous issue of SPIE Professional with an SPIE member login.
Have a question or comment about this article? Write to us at spieprofessional@spie.org.
Recent News
2022 SPIE-Franz Hillenkamp Postdoctoral Fellowship Awarded to Ivan Kosik
Press Releases
A superconducting silicon-photonic chip for quantum communication
Publications
From Disney to Artechouse