Optical metrology's superior test and measurement capability has both expanding uses and growing challenges in industrial applications.
12 April 2007
Erin M. Schadt
With a definition like "the science and technology of performing measurements with light" you can expect optical metrology to encompass scores of applications. Indeed it has a broad scope within optics, including a number of time-tested application areas. One of these is the use of optical metrology in industrial applications and settings, an area which is currently broadening.
Optical metrology has traditionally been associated with testing optical components, and with other manufacturing applications such as measuring size, shape, and in-dimensional tolerancing. The science has also found application in mechanical ways such as whole-field optical methods for shape, deformation, strain, and stress measurement.
"Optical metrology for manufacturing, especially for optical components, is well established and widely used in industry. Optical metrology for mechanics is slowly making its way into industry with aerospace, automotive, semiconductor, and now biomedical industries using these as better alternatives to conventional contact mechanical or electrical probes," says Anand Asundi of Nanyang Technological University, Singapore. 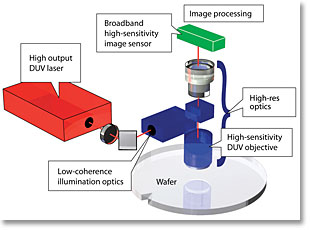 The deep ultraviolet (DUV) system illustrated here is an example of optical metrology for wafer inspection. Highly sensitive defect detection is achieved with optics that use a 266 nm wavelength DUV laser, an illumination system, and high-resolution optics.
Inspecting Metrology
While optical metrology continues to be the go-to method in these areas, it has found many other applications in industrial settings. Optical metrology is now used to measure such parameters as surface properties, material and thin-film properties, physical dimensions, chemical composition, image quality, temperature, and color and brightness. These factors are vital when inspecting anything from semiconductor wafers to electronics to packaging to food, as well as monitoring emissions and identifying packages from labeling.
This laundry list of applications is evidence that optical metrology has several advantages over alternative testing and measuring methods. The greatest of these is its non-contacting nature.
"For example, measuring the physical diameter of a fragile pipette or an optical fiber with a micrometer would damage or destroy the fiber. Laser dimensional gages do not contact the part under test," explains Jay Kumler, president of Coastal Optical Systems Inc. (West Palm Beach, FL) and co-chair of Optifab 2007 (see sidebar).
High sensitivity, compact size, immunity to electromagnetic interference, and especially fast throughput during online testing, are also very important characteristics of optical metrology.
"Thousands of parts per minute can be inspected in a production line with great certainty without slowing production," says Kumler. "One hundred percent sampling is possible in most cases, as opposed to a technician sampling a small fraction of the product."
Being able to accurately measure size at high rates has commercial advantages beyond delicate parts, though. Commercial shippers such as FedEx use optical methods to measure the size of a package, and charge customers based not just on weight but also on "dimensional weight."
Emerging Applications
There are many emerging areas for optical metrology in industrial applications. For example, chemical industries, micro-electro-mechanical systems (MEMS), and microfluidics/bioMEMS constitute growing application areas for optical metrology.
Precision distance measurement systems and pattern recognition for defect detection (see figure) are two technologies in particular that are taking off.
"Another new area is multispectral metrology?inspecting at two spectral bands simultaneously, [as in] dual-band or hyperspectral cameras," says Kumler. "This can be visible and near-infrared, or visible and UV, or visible and midwave infrared. There is a lot of interest in image fusion?superimposing imagery from two spectral bands. This requires new camera technologies: dual-band and wide-band cameras."
Line-scan cameras are used to inspect quickly moving items: food, fabric, paper, etc. By using different bands to monitor the objects, these new dual-band cameras achieve higher contrast images both in the visible and near infrared ranges.
Beyond typical tech challenges such as cost, ruggedness, and reliability, this represents one of the crucial demands of optical metrology. That is, capturing an adequate amount of information to prevent identification or reconstruction problems.
"To them belong the classification of internal material faults on the basis of surface displacement measurements and the reconstruction of wavefronts and metrological data, respectively, from measured intensities," explains Wolfgang Osten, Universität Stuttgart, chair of Optical Metrology 2007. "Active and multisensor/multimodal inspection strategies, enhanced phase retrieval, and wavefront modulation techniques are promising approaches to overcome these ill-posed problems."
Small Challenges
As the inevitable migration to the nanoscale continues, optical metrology also faces interesting scientific challenges.
"Motivated by the continued miniaturization in micro- and nanotechnologies, the search for resolution enhancement techniques takes an important place in modern optics and metrology," says Osten. "Here the investigation and understanding of the interaction of light with subwavelength structures plays an important role for the reliable measurement of critical dimensions in the nanoscale."
According to Osten, as the scale changes for applications, advances in microelectronics and modulator, light source, sensor, actuator, and software technologies will help to increase resolution and enhance measurements.
"Just as industries push toward smaller wavelengths in the x-ray and extreme UV [EUV] to enable fabrication of these features, so too optical metrology aims to beat the diffraction limit by resorting in the first instance to shorter wavelengths," explains Asundi. "X-ray and EUV metrology are developing rapidly. For this to happen, lasers at these wavelengths, as well as optical components and detector technologies, have to advance. We are approaching the border between physical and quantum optics, and optical metrology can then subsume these new technologies and expand its horizons."
Optical Metrology Events
Optical metrology will be covered at two upcoming SPIE events. Optifab, the largest optical manufacturing product and supplier exhibition held in the United States, is set for 14-17 May in Rochester, NY. The symposium covers many areas of optical fabrication, such as new developments in metrology, including all forms of interferometry, MTF measurement, ellipsometry, scatterometry, and surface/subsurface metrology.
Meanwhile, Optical Metrology 2007 will be held 17-21 June in Munich, Germany, and is colocated with Laser 2007 World of Photonics. The Optical Metrology symposium will address the role of lasers in optical measurement systems for industrial inspection; modeling aspects in optical metrology; and optics for arts, architecture, and archaeology.
Read more about Optifab at spie.org/events/ofb, and further information about Optical Metrology is available at spie.org/events/eom.
Erin M. Schadt, SPIE Professional Managing Editor
Recent News
Orbital angular momentum enables high-dimensional nonlinear holography
Publications
Found in translation
Community
Water muting with THz optoacoustics: a breakthrough for biomedical applications
Publications