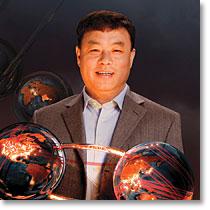 William Yang is a founder and CEO of BaySpec Inc. (Fremont, CA). The company was founded in 1999, and designs, manufactures, and markets advanced fiber-optic components, modules, and subsystems for optical networking. BaySpec has an impressive line-up of individual and corporate investors including Cisco Systems, Finisar, H&Q Asia Pacific, Intel, JDS Uniphase, and the KaiYuan Group.

An SPIE member, Yang is an electro-optics engineer with more than 18 years experience in optical and electro-optical design and engineering. Before founding BaySpec, Yang worked in a range of high-tech optics businesses in the United States and Canada, including companies in semiconductor metrology and biomedical optics.