SPIE members contribute to this vital European initiative promoting optics- and photonics-based technologies.
01 July 2006
Paul McManamon
Attending Photonics Europe and the Defense and Security Symposium (DSS), both held in April, made for a busy month for myself and SPIE.
DSS was bustling. I ran into Steve Jamison from BAE Systems (Lexington, MA), who said, "I called my subcontract guy and told him to get down here since many of our current suppliers and other potential suppliers are all in one location."
This is a perfect example of the kind of service SPIE provides -- connecting the people and technologies of the optics and photonics community.
At Photonics Europe an initiative was featured that is also set to benefit the greater optics and photonics community. At the event, Viviane Reding, European Commissioner for Information Society and Media, accepted the first draft of the Strategic Research Agenda in Photonics. 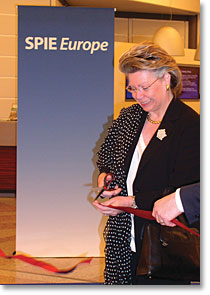 Viviane Reding cuts the ceremonial ribbon to open the Photonics Europe Exhibition.
The agenda is part of Photonics21, an industry-focused initiative promoting the need for an aggressive and rapid commercialization of optics- and photonics-based technologies over the next five years in Europe.
It was exciting to have Reding accept the draft agenda at Photonics Europe. This is a testament to the central role Photonics Europe has achieved as an event in such a short time.
To learn more about Photonics21, turn to page 18 where Hugo Thienpont, SPIE board member and member of the Photonics21 board of stakeholders, explains the Photonics21 agenda and its intended effects on the European and worldwide optics and photonics communities.
I am proud that SPIE members have contributed to Photonics21 -- members such as Thienpont and Malgorzata Kujawinska, SPIE immediate past president and a vice president of Photonics21 -- and I thank them.
I'd also like to thank all the SPIE members and volunteers in Europe who participated in the various working groups that helped develop the Photonics21 agenda and on other plans for photonics development.
SPIE has worked for many years in Europe (and all around the world) to promote optics and photonics. In the last several years this has accelerated, especially in Europe. With local people in different regions taking a strong role in SPIE activities and lobbying locally for photonics and optics technology development, our activities are more effective.
Of course finding the money to implement plans such as Photonics21 is always a challenge. It is interesting that similar monetary challenges are being faced on both sides of the Atlantic.
In the United States we have discussion of American competitiveness and strong endorsement by many senators and representatives, but we still have questions about the actual appropriation of the money. In Europe we have the announcement of Photonics21, but we still have issues about actual funding levels. It seems this is a common challenge.
Endorsing an ideal is much easier than coming up with the money. SPIE will continue to support these types of initiatives through many activities, and along with that, SPIE members on both sides of the Atlantic need to continue to be strong voices for economic support of optics and photonics technology development.