01 July 2006
This March members of SPIE and the Optical Society of America joined nearly 300 scientists, engineers, and business leaders who made visits on Capitol Hill as part of the 11th annual Congressional Visits Days (CVD). The team met with 40 congressional offices to express the need for increased and balanced federal investment in research and development.
"Senior staff members in both the House and Senate were very receptive this year to our visits and advocacy for the appropriation of funds for Science, Technology, Engineering and Mathematics (STEM) education and research," says participant Keri Then.
One of the issues the group advocated for was support of the President's American Competitiveness Initiative (ACI), which was announced in the January 2006 State of the Union Address as an effort to encourage American innovation and strengthen the ability of the United States to compete in the global economy.
This ambitious strategy would commit $5.9 billion in FY 2007, and more than $136 billion over 10 years, to increase investments in research and development, strengthen education, and encourage entrepreneurship and innovation. The initiative includes specific support recommendations for the National Science Foundation, the Department of Energy Office of Science, the National Institute of Standards and Technology and the Department of Education.
"It has taken years of effort to bring this issue to the forefront," says SPIE Washington, DC, Representative Robert Boege. "It is critical that Congress hears from the notoriously silent science and technology community on this issue."
More information about the American Competitiveness Initiative can be found on the web at www.whitehouse.gov/infocus/technology. 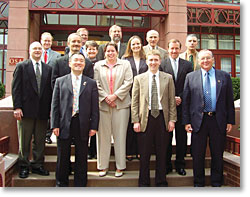