SPIE Fellow Duncan Moore is this year's recipient of the Gold Medal of the Society the highest honor given by SPIE.

01 July 2006
Erin M. Schadt
From associate director for technology in the White House Office of Science and Technology Policy to founder of Gradient Lens Corporation to president of the Optical Society of America (OSA), Duncan Moore has had a varied and amazing career in optics. A career being honored this year with the Gold Medal of the Society, the highest honor bestowed by SPIE.
Currently Moore is the Rudolf and Hilda Kingslake Professor of Optical Engineering at the University of Rochester (U of R; Rochester, NY) Institute of Optics and professor of entrepreneurship in the U of R's Simon Graduate School of Business. In his own words, "Optics has been very, very good to me."
From Telescopes to Teaching
His love of optics began early with the gift of a telescope from his grandfather. Moore says he was a typical product of the space age of the late 1950s and '60s. His father was a third-generation owner of an insurance business, but he "vowed that he would never force any one of his three children into the family business." Instead, Moore inherited his science proclivity from his mother who had a degree in chemistry.
Moore's interest in space and optics continued to grow, and he began college hoping for a career in astronomy, specifically in astronomical instrumentation. This plan, however, changed as the result of a summer job he held at Itek in Lexington, MA.
There he shared an office with Robert Fischer, now a former president of SPIE and current president of OPTICS 1 (Westlake Village, CA) and Tom Sloan who would go on to own Southern Optical. Moore worked with a number of people at Itek who were either already big names in the field or who would go on to be.
"They kept talking about this place called U of R, and so I learned from all these guys about the optics degree here. I came to U of R in 1969 with the intention of being here for one year, and I've been here almost continuously since then. I got here, and I had fantastic faculty members. I had people like Brian Thompson, Rudolf Kingslake, Phil Baumeister, and Bob Hopkins. I got here and thought, 'wow, this is incredible.' "
While at U of R, Moore began his career of innovative research, especially in the area of gradient optical systems. For his master's thesis, he designed the first lenses with either an axial or a radial gradient using aberration theory. For his PhD thesis, he developed the first raytrace algorithm that would allow both gradient index, or GRIN, materials and discrete surfaces.
Moore's many other research accomplishments include: co-writing the first computer program to optimize lenses with GRIN materials, building the first interferometer to measure the GRIN profile, and fabricating the first axial gradient lens ever.
He's fostered even more breakthroughs as advisor to dozens of master's and doctoral candidates over the years. A number of these students have gone on to successful careers in optics. Just one example is Susan Houde-Walter, 2005 OSA president, whom Moore advised for both her master's and doctoral theses.
"I think one of the things that kept me in the field is that working with young, smart students is really very rewarding," he says.
Student and professor are certainly not the only roles he's had in his career. In 1980, he founded the Gradient Lens Corporation. A successful company now, Moore says getting to that point was a long road. "We worked off SBIRs, we worked off contract research, and then we introduced the Hawkeye Boroscope at a trade show in 1996. Not until then did we have a successful commercial product. Finding a market niche for a new technology can take a real long time."
White House Bound
Another sector Moore has made his mark in is government. On a sabbatical from U of R in 1993-94, he was the American Physical Society Congressional Science Fellow in Senator John D. Rockefeller's office. 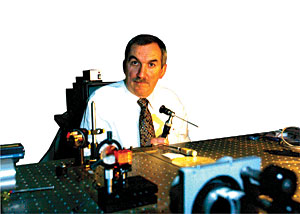 Duncan Moore in his lab at the University of Rochester's Institute of Optics.
A few years later, after presidential nomination and Senate confirmation, Moore served for three years as the associate director for technology in the White House Office of Science and Technology Policy. Among many initiatives, he says, "we were working on the whole issue of what we call the society-driven science and technology agenda. That is, how science and technology can work to improve the lives of the average American."
One of the programs, called ElderTech, was aimed at utilizing science to allow older people to live independently longer. Though the program never blossomed into a full-blown initiative, Moore is currently working on a related subject as part of a program at the Stanford Center for Longevity.
"I'm working on the geopolitical issues of aging right now, and working with other universities around the country and around the world." For more on this topic, see the exclusive article Aging Gracefully.
During 1990-91, he chaired the Hubble Space Telescope Independent Optical Review Panel, which determined the optical adjustment needed for the then-ailing Hubble.
Moore has also served as the president and CEO of the Infotonics Technology Center, which fosters R&D collaboration among photonics industry, universities, and government.
While he's a member of many technical societies, Moore is an SPIE Fellow and an OSA Fellow, and has contributed enormously to both organizations including serving as president of the OSA in 1996.
Considering all of Moore's accomplishments, Dennis Hall, associate provost for research and graduate education at Vanderbilt University (Nashville, TN), points out perhaps the most important aspect of Moore's career, "A common thread that runs through everything Duncan touches is how deeply he cares about the welfare of everyone with whom he comes into contact. I think this is the focus of everything he does."
In the Lab
Duncan Moore keeps busy with a number of cutting-edge research projects. Here are three he's currently working on with teams at the University of Rochester.
Human Eye Gradient Lens
Moore is studying how the human eye's lens shape accommodates as people's vision changes over time. "I'm trying to understand the visual process of how the gradient interacts with the visual system. It becomes important because people are looking at the possibility of lens implants that will allow them to accommodate after 45 years of age, and we'd like to understand how humans do that."
Insect Eye Sensors
In another eye-related project, Moore and team are working on ways to make affordable insect-type visual systems.
"You can envision having one eye here in the middle of my office and one down the corridor, so the one in my office starts turning on lasers in all different directions until it actually hits the one that's down the corridor. Then when the one in the corridor receives the signal, it turns on the laser and sends the laser beam back, and you open up a channel between the two."
Solar Cell Arrays
In conjunction with the University of Delaware, Moore is researching arrays of lenses that would allow people to charge their laptops using solar power.
"The idea is you open up your laptop and out of the back of the screen is something that's up to 10-mm thick that folds out and chases the sun."
Erin M. Schadt, SPIE Professional Managing Editor
Recent News
Water muting with THz optoacoustics: a breakthrough for biomedical applications
Publications
Tiny implantable tool for light-sheet imaging of brain activity
Publications
Orbital angular momentum enables high-dimensional nonlinear holography
Publications