Photonics is a key driver of European innovation, and a new technology platform calls for its acceleration.
01 July 2006
Hugo Thienpont and Ronan Burgess
Photonics21 brings together the key stakeholders in Europe in the area of photonics. Its purpose is to stimulate greater and more effective investment in research and development, to accelerate innovation, and to eliminate barriers to the deployment and growth of new photonic technologies.
Photonics21 is one of several European Technology Platforms (ETPs) that have been set up and led by European industry to address technology areas considered to be key to future economic growth in Europe. Photonic technologies are driving innovation in a broad range of areas from telecommunications to manufacturing and lighting to medical and environmental.

In order to remain competitive, European industry needs to better exploit the capabilities of high technologies. Investment in research needs to be increased, and there needs to be better coordination between privately and publicly funded research, and between European and national research. In particular, the fragmentation of Europe's photonics research and development effort needs to be addressed.

The Photonics21 platform therefore brings together the key players from the entire photonics sector and includes industrialists, researchers, academics, and policy makers. The European Commission has actively encouraged the formation of such technology platforms, in that they can help to better align European research priorities with the needs of industry.
Photonics21 has its origins in early 2005 with the publication of "Photonics for the 21st Century," which set out a vision for photonics. The first task for Photonics21 was to draw together the main stakeholders in the sector and to define a strategic research agenda, presenting the medium- to long-term objectives for photonics. This was completed in March 2006 and the strategic research agenda was officially presented to Viviane Reding, European Commissioner for Information Society and Media, by Alexander von Witzleben, president of Photonics21, during the Photonics Europe 2006 symposium.
In the next few months, the platform will produce a deployment strategy that defines how its members will mobilize the human and financial resources needed.
The ambitious goals of the Photonics21 platform will not be achieved overnight, and its members will need to remain committed to these goals for the long haul. However, it is clear that the importance of photonics is already being recognized more widely, and that technological advance is entering the "century of the photon." 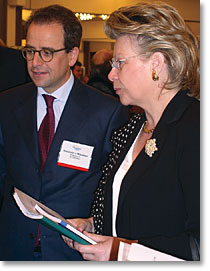 Alexander von Witzleben, Photonics21 president, presented the first draft of the strategic research agenda to Viviane Reding at Photonics Europe in April.
Learn more about Photonics21 at www.photonics21.org. There you can read about recent developments or download the strategic research agenda titled Towards a Bright Future for Europe.
Active Participants
Through SPIE Europe (based in Cardiff, UK), SPIE leadership and members have been active participants in the formation and implementation of the Photonics21 strategic agenda for photonics research and development.
"Photonics21 is an exciting proactive step by the broad photonics community in Europe," says Eugene Arthurs, SPIE Executive Director. "It was striking to see industry leaders, academic researchers, and those from many research institutes come together in Brussels last December to assess Europe's opportunities in photonics, and subsequently to quickly craft the technology platform document. The document has already helped funding decision makers in the EU glimpse the enormous potential for photonics in Europe, and recognize some of the inertial forces. SPIE Europe will continue to work in support of the technology across Europe."
Hugo Thienpont and Ronan Burgess

Ronan Burgess is with the European Commission's Information Society Technology in Belgium.