The field of holography lost one of its most notable figures on 23 December 2005. Emmett Leith -- the "reinventor" of the holographic process and co-inventor of the 3-D hologram -- may have passed away, but his impact on the field of holography won't soon be forgotten.
Leith was born in 1927 in Detroit, MI, the site of Wayne State University where he would earn a BS in 1950, his MS in physics in 1952, and his PhD in electrical engineering in 1978.
It was at the University of Michigan's Willow Run Research Center in the mid-1950s that Leith reinvented holographic techniques. Working on the then-classified Project Michigan, a synthetic-aperture radar system, Leith was tasked with optical processor research.
The concept behind radar-wave phase reconstruction inspired Leith to explore wavefront reconstruction for optical processing improvement. Although Dennis Gabor had performed similar work several years before with wavefront recording and reconstruction to improve the electron microscope, Leith was unaware of his work.
Leith's work on optical processing as part of this project led to the first coherent cross-correlator and coherent optics to perform pulse compression of chirped radar pulses.
Unprecedented Work
During the early 1960s, important elements combined to launch what is considered modern holography. First, Leith and his assistant at the time, Juris Upatnieks, were finally allowed to publish their non-radar results; the continuous-wave helium-neon laser became available as a coherent light source; and Leith and Upatnieks realized that larger spectroscopic plates were an important key to 3-D holography. In 1962, the pair produced the first 3-D laser transmission hologram, of a toy train and a bird.
In an interview with Holography News last year, Leith described their early work on holographic images: "First we simply duplicated Gabor's work using a mercury arc lamp. I was most astonished when I saw it because it was an image without an object. Incredible! Then we took a second beam of light and introduced it at an angle and then we used for an object something very simple -- a wire -- and that wire was reconstructed quite nicely. For the first time ever we saw the previously inseparable twin images of holography completely, separated from each other, and that was probably the most exciting thing. We went from wires to letters and from letters to junk and eventually to the train engine. By November 1963 we were making our first really dramatic holograms and people came and looked at them. They were totally taken aback by these astonishing pictures."
For the book The Art and Science of Holography: A Tribute to Emmett Leith and Yuri Denisyuk (see sidebar), Stephen Benton described Leith's and Upatniek's public breakthrough.
Benton wrote, "The curtain truly rose at the Spring 1964 meeting of the Optical Society of America, in Washington, DC. There Leith and Upatnieks gave a short oral paper on their 3-D holograms, and invited the attendees to view a hologram in the hotel suite used by the Spectra-Physics company, who made most of the early holography-capable lasers. A line of optical scientists and engineers wound down the hallways of the hotel as they patiently waited to see the 3-D images that were absolutely unprecedented in their realism and accuracy."
Charles M. Vest, professor of mechanical engineering and president emeritus of the Massachusetts Institute of Technology, says that Leith was "one of the most inventive and unique individuals I have ever known. His scientific reasoning was based on a remarkable ability to visualize the physics of whatever he was working on in deceptively simple ways." 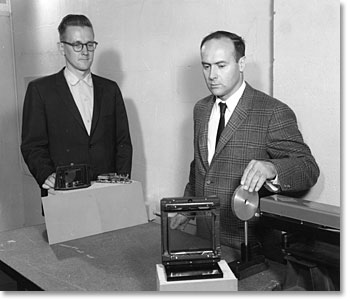 Fig. 1 Juris Upatnieks (l) and Emmett Leith (r) circa the mid 1960s with 3-D holography equipment.
Photo from the AIP Emilio Segrè Visual Archives, Physics Today Collection.
Lifetime of Achievements
Leith received the National Medal of Science from President Jimmy Carter in 1979, and was a member of the National Academy of Engineering. A Fellow of both SPIE and the OSA, Leith also received the highest distinctions of both societies -- the OSA Fredric Ives Medal in 1985 and the SPIE Gold Medal of the Society in 1990. In addition, he aptly received the inaugural Dennis Gabor Award along with Yuri Denisyuk from SPIE in 1983.
Leith not only left an impressive career as his legacy, but just as important he touched many lives with his work and his character. Having worked at the University of Michigan from 1952 until his death, he supervised more than 40 PhD candidates throughout his career. "Emmett Leith was an outstanding scientist and mentor for his students," says Upatnieks.
Vest recalls a meeting with Leith after the two had not seen each other for a long time. He mentioned an article of Leith's that he had seen published some years earlier on the history of Willow Run, and asked if it would be possible to get a copy of it sometime.
"Emmett said 'Sure,' reached into his pants pocket, pulled out a copy of the article, and handed it to me."
Legacy of Generosity
Tung H. Jeong, SPIE Member, is professor emeritus at Lake Forest College (Lake Forest, IL). In 1965, the college's physics department hosted a conference focused on low-cost laboratory experiments.
"I wrote a letter to Leith, explaining to him the object of our conference, and asking to borrow a hologram for demonstrations," says Jeong. "Leith, without having met me in person and only just learning of my interest in teaching, not only sent me one of his now famous holograms of the chess pieces, but asked that I keep it. Because of this hologram, two first-year students, Arleigh Luckett and Paul Rudolf, became interested in pursuing an independent study project on the subject. The result was the development of a system for making 360° viewable holograms." 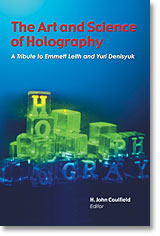