Imaging at terahertz frequencies offers non-ionizing penetration and spectroscopic capabilities that make it appealing for homeland security, medical, and industrial inspection applications.
01 April 2006
Kristin Lewotsky
When terahertz imaging was making headlines in the mid 1990s, courtesy of researchers at Bell Laboratories (Holmdel, NJ), the focus was frequently industrial, such as potentially measuring the water content of packaged Fig Newton cookies. Back then, says former team member Daniel Mittleman, now of Rice University (Houston, TX), the systems were room-sized and the technology limited.
Today, much has changed. Reliable terahertz sources exist, the room-sized systems have shrunk to the size of a briefcase, and more than one company sells commercial systems. The applications have changed also; today, the big targets of opportunity for terahertz imaging also include security and medical applications.
Penetrating View
The excitement about the technology stems in part from its degree of penetration. Alternatives exist, but none with the distinct advantages of the terahertz regime. Unlike x-rays, terahertz radiation is non-ionizing. Unlike ultrasound, terahertz waves can image without contact, and they can go deeper than near-IR radiation.
That capability makes terahertz imaging attractive for non-destructive testing (NDT) applications such as inspection of graphite composites. Terahertz imaging provided a means for inspecting the structure of the space shuttle, for example. The technology has gone commercial via companies like Picometrix (Ann Arbor, MI), which licensed the Bell Labs IP and ran with it, adding fiber coupling, compact sources, and telecom-style packaging to the systems. "We took what was then a lab-based technology and made an engineerable industrial robust system," says David Zimdars, the company's manager of terahertz research and development.
NDT is very important, says Xi-Cheng Zhang, director of the Center for Terahertz Research at Rensselaer Polytechnic Institute (Troy, NY), but the killer application is spectroscopy, which offers tremendous potential for homeland security applications (see figure). Consider a crowded airport during the holidays. You can isolate and search a suspicious character, but what about the seemingly innocent traveler who happens to be a terrorist on a mission? "A terahertz wave passes through clothes and reflects off the target and returns, and you analyze the spectrum to identify what you're looking for," says Zhang. "Is that a suicide bomber? Do they carry explosives?" 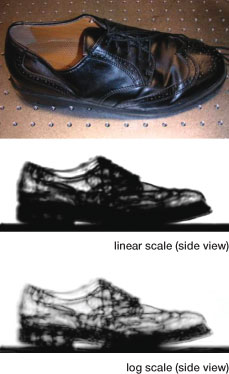 Fig. 1 Transmitted terahertz intensity reveals the detailed internal structure of a shoe in linear scale (middle) and logarithmic scale (bottom).
Photo credit: RPI/Zhang
Success in this area requires that materials have unique spectral signatures in the terahertz frequency band. "Many different explosives appear to," says Mittleman, "many different narcotics appear to, so there are a lot of contraband things that you might want to be able to find."
The terahertz regime lies roughly between 300 GHz (1 mm) to 10 THz (30 µm). The upper limit varies depending on application, driven largely by atmospheric absorption. The Terahertz Imaging Focal Plane Technology (TIFT) program at DARPA (Arlington, VA) defines the upper limit at 557 GHz, says program manager Mark Rosker. "If you look at atmospheric propagation above 557 GHz, you find that there are very few places you can go more than about 100 m. I think my standard here is something like 10 dB of attenuation; below, you can go much further." Certain frequencies beyond this optimum band offer better propagation than others, he notes, citing 650 GHz and 850 GHz. "1.5 THz is an okay place, 2 THz is a very marginal place, maybe, but that's about it."
The signatures may exist, but can a terahertz system really identify them from tens of meters away in open atmosphere? Rosker is not so sure. "These [terahertz transmission] lines tend to be [only] 50 to 100 GHz wide. From the standpoint of spectroscopy, [it's] a real challenge."
He's quick to point out that gas-phase terahertz spectroscopy using a sample cell to eliminate pressure broadening is completely viable. When it comes to our hypothetical airport scenario, however, he's skeptical. "For certain condensed materials or gases at atmospheric pressure, the spectral lines are very broad and they're not very rich. Neither of those facts are favorable from the standpoint of doing unambiguous identification of a chemical."
Show Me the Detection
The challenges in terahertz imaging, and particularly in spectroscopic analysis, appear to lie primarily in the hardware rather than the software. Currently, most systems produce terahertz emissions by either frequency upconversion from the radiowave regime or by frequency downconversion from optical wavelengths. Common downconversion methods include photomixing, notably using semiconductor lasers typical for telecom applications operating around 1.5 µm. An alternative is to irradiate a semiconductor microantenna with the IR output, typically from a titanium-doped sapphire (Ti:sapphire) laser.
Quantum-cascade (QC) lasers show promise as terahertz sources able to generate output on the order of tens of milliwatts. Although that may not be sufficient for certain standoff applications, it still provides an inexpensive terahertz source for many useful applications, including security or medical applications. QC lasers do face other problems, though, including lack of tunability, need for cryocooling, and limited terahertz coverage. "If they're going to be used for explosive detection, you've got to get the frequency down to where it's in the same spectral range as the explosive," says New Jersey Institute of Technology (Newark, NJ) professor of physics John Federici. "Right now the terahertz frequency [emitted by QC lasers] is just too high." The consensus, though, seems to be that QC laser technology will overcome these limitations in the reasonably near future.
Another technical challenge is detection. Detector technologies range from a reverse version of the semiconductor-antenna configuration to microbolometer arrays. Sensitivity remains a challenge, as does array detection. Currently, most terahertz imaging systems use single-point detectors and raster scanning to generate an image. Focal plane array capabilities would simplify things, but the technology simply doesn't exist yet.
Federici's group is using Picometrix equipment and interferometric-imaging synthetic-aperture techniques to make sparse detector arrays act as far more dense arrays. The method involves correlating the electric field at pairs of detectors in the array. "Each correlation of a pair of detectors gives you a spatial Fourier component of the image," Federici explains. Performing the correlation with all possible pairs of detectors generates an inverse spatial Fourier transform of the image; transforming that reconstructs the image. The number of pixels in the image scales as N(N-1)/2, where N is the number of detectors, says Federici. Generating a 1600-pixel image, for example, requires only 58 detectors, significantly simplifying the fabrication problem.
Of course, terahertz imaging can't do everything. "It's not going to be a silver bullet," says Federici. "Terahertz can't go through metal, so I think that probably in a complete security system, terahertz will be one technology [of many]."
As for the Fig Newtons, Mittleman says terahertz imaging never took hold there, mostly because the technology was insufficiently mature at the time. "We've come a long way since then. At this point, someone ought to revisit the Fig Newton question. Now that the technology is mature enough to be commercial, it really is an appropriate time."
Just think, you might never buy a stale cookie again.
Walking on a Wire
Endoscopic terahertz imaging represents a significant opportunity, but conventional waveguiding techniques have been limited by material absorption or waveguide dispersion. By using bare metal wires, Dan Mittleman and his Rice University (Houston, TX) research group have successfully guided terahertz waves, opening the door for endoscopic terahertz imaging.

Fig. 1 Numerical simulation shows a terahertz wave propagating down a wire.
Photo credit: Jason Deibel and Dan Mittleman, Rice Univ.
In 1899, Arnold Sommerfeld discovered that it was possible to propagate a guided wave on a cylindrical metal surface. The method was not viable for radio waves, but works at terahertz frequencies. "It's really a sweet spot with this kind of waveguide," says Mittleman. "The wave is reasonably well confined to the surface of the guide, the loss is relatively low, and the dispersion is virtually zero."
The waves will remain confined even on a bent wire, though there is some additional loss. It's also possible to couple the wave from one wire to another, which Mittleman and his group have used for endoscopy. The input signal travels down one branch, reflects from an object at the end, and returns along the other branch. The group believes it has achieved 50% coupling efficiency with the system. Up next: endoscopic imaging.
-- KL
Bolometer Arrays Image T-rays
Read about the superconducting bolometer array development underway by Heinz-Wilhelm Hubers at DLR in Berlin, Germany. Bonus article exclusively available from SPIE Professional.
Acknowledgment
Thanks to Martyn Chamberlain, professor of applied physics at the University of Durham (Durham, UK) for providing information for this article.
Got ideas about terahertz technology?
DARPA will soon issue a Broad Agency Announcement covering solicitations for the next phase of TIFT at www.darpa.mil/baa/#eto.The European Commission is currently calling for proposals for security projects. There are many areas of the call promising for terahertz technology, for example one part of the call focuses on detection of explosive devices. Read more at www.cordis.lu/security/calls.htm.
Kristin Lewotsky
Kristin Lewotsky is a freelance technology writer based in Amherst, NH.