The ETH Zurich professor of physics discusses her innovative career as well as her proactive mentoring and educational approaches
13 February 2020
by Daneet Steffens
Technology, Community
PRAGMATIC FOCUS: "... creating a better laser — that success cannot be rejected."

Ursula Keller is the recipient of the 2020 SPIE Gold Medal, the highest honor the Society bestows, and she will be giving a plenary at Photonics Europe 2020. This interview with SPIE originally appeared in a shorter version in Electro Optics magazine. If you would like to receive complimentary digital copies of Electro Optics in your Inbox, please subscribe here.

1. You have many inventions and "firsts" in the field of ultrafast lasers. Is there one in particular that stands out to you as the most rewarding?

The SESAM (semiconductor saturable absorber mirror) invention — my first one. The first is always special. This was enabled by the Bell Labs spirit. I started to work at Bell Labs as an independent member of technical staff (MTS) scientist directly after my PhD. My guidelines for building up my lab were simply, "Do something different from everybody else, but it better be good." Then, when I went to my boss for advice on some ideas, he said, "Why are you asking me? You are the expert!" When I was ready to spend my funds for building up my lab, he asked, "Are you sure you want to buy this laser? You only get this chance for such a large investment once!" That was scary — after all, when are you ever really sure?

So I had to simply take a leap of faith and make the important decisions independently. It was during this time at Bell Labs that I did the original work on the SESAM, though I did not know that would be the outcome at the beginning. You simply have to start and constantly ask the right questions, constantly challenge your chosen approach, re-adjust as needed. It helps to be surrounded by excellent people, to have to answer their hard questions!

Once you do this, you will repeat the process many times more. My time at Stanford University as a PhD student and at Bell Labs were vital for me to succeed at ETH Zurich as the first tenured woman professor in the physics department. With the excellent funding I could get in Switzerland, I was empowered at a relatively young age and could multiply my efforts with the help of many excellent students and postdocs. To date I have graduated 81 PhD students, and many of my students and postdocs are now professors and entrepreneurs.

2. Many of your contributions have enabled further technological advancements and applications. When deciding on research directions, are you interested in the applications as much as the fundamentals?

I established my career in applied science in the US, watching many excellent scientists start commercial spin-offs. Growing up in a working-class family in Switzerland made me choose applied physics for my PhD: my main need was to have a job at the end of my studies, and I believed that this would be nearly impossible in theoretical physics even though I graduated top of my class at ETH Zurich in 1984. As it turned out, it was much easier to start off with applied research as one of the few women in the field: applied research results are judged by your customers, whereas fundamental science results are judged by peers, and peer review is not gender blind. But creating a better laser — that success cannot be rejected. Funding in Switzerland has allowed me to do both applied and fundamental research, both of which fit my interest; it also provides sanity checks when some of my favorite papers in attosecond science receive bad peer reviews.

4. Ultrafast and atto-second science has really grown in the past few years. What advancements are you most excited about, and what are the biggest challenges still facing the community?

As we look back from today for the last 30 years, we see that lasers generating short pulses — referred to as ultrafast lasers — based on diode-pumped solid-state and fibers laser systems using SESAM-modelocked oscillators have become the key enabling technology for many new applications, and have established themselves successfully in at least several industrial areas. New commercial applications are emerging in medical and bio-medical applications (multi-photon imaging, tissue ablation, corrective eye surgery), material processing (precision micro- and nano-cutting/processing of materials), telecommunications (dense wavelength division multiplexing for higher signal transmission and all-optical signal processing), optical clocking and frequency metrology. As the technology becomes smaller, less expensive, more robust, it allows for the exploitation of "ultrafast" phenomena to become more and more common, ultimately entering our everyday lives — for example using ultrafast lasers in high-speed optical communications for increasing communications bandwidth worldwide, optical clocking of the next generation of multi-core personal desktop computers, transportable optical clocks for precision metrology applications, and many medical and bio-chemical applications for which the current ultrafast technology is still considered to be too expensive.

We have seen many orders of magnitude improvements in average output power and a spectral coverage from THz to X-rays with novel nonlinear frequency conversion concepts beyond the simple perturbation theory. Even new concepts enabling nuclear photonics are being explored.

The current challenge in fundamental science for the higher energy laser sources are the limited conversion efficiency. This limits the signal-to-noise for many measurements. Thus, there is an ongoing effort in high energy and high pulse repetition rates of at least 100 kHz and ideally megahertz and in improved frequency conversion concepts. Just looking at the impact of X-ray diffraction for example, imagine doing everything time resolved. With better signal-to-noise measurements we can start to systematically study and exploit the non-equilibrium behaviour in quantum many-body systems in molecular chemistry and in solid-state physics.

Attending a few larger meetings each year allows me to catch up on the broader knowledge horizon. I try to get an update on different hot topics, pursue ongoing collaborations and explore new ones. I also attend smaller, more focused meetings to stay up-to-date in my specific field.

6. You were the first woman to become a professor of physics at ETH Zurich. What do you consider the most recent progressive changes for women in the fields of optics and photonics?

Initially, the proportion of women professors in the physics department at ETH Zurich was more than ten percent — in 2006, for example, we were 3 out of 21 professorships. Unfortunately, this percentage did not improve. Currently, there is only me out of 28 full or associated tenured professorships, so it is a substantial step backwards, though the number of female graduate students in the department continues to increase. Over the past 20 years, it's become quite clear that specific initiatives are needed to make lasting changes in this area. My personal experiences and observations are also confirmed by many social science studies. In my opinion, sustainable progress will only occur if we deliberately institute changes, establish a more favorable framework, increase the number of women professors to at least 30 percent within each department with some urgency, and create better governance to support excellence for all.

7. You are recognized across the industry for your long-time support of early-career researchers and building networks for women scientists. Did you have a personal inspiration, someone who gave you that same support when you were younger? Or, if not, what made you embrace the role of mentor to others?

At Stanford I met Professor Geraldine Kenney-Wallace, my first great mentor. When I wanted to thank her, she told me to help other women, so I did.

I was strongly empowered as a director of the Swiss National Center of Competence in Research in Molecular Ultrafast Science and Technology (NCCR MUST), for which I received an explicit mandate — and resources — to address gender equality issues. The establishment of the ETH WPF marked our initial steps to counter structural barriers and improve corporate governance. Some of my favorite achievements include increasing the gender percentage in our network from 9 percent to 23 percent principle investigators; publishing a survey of issues important to women professors at EPFL and ETHZ in 2019, and the creation of an EPFL commission on status of women faculty; implementing a full PhD student fellowship for postdoc mothers; and publishing Inspiring Conversations with Women Professors.

We need more support from both men and women to drive change towards a better world in which the person and their performance counts, rather than gender and race. We need to make excellent education a priority. I want to see more women shape the future with qualified men unthreatened by assertive and successful female peers! 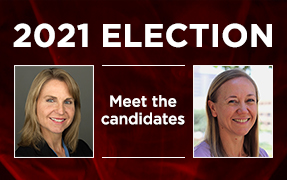 2021 Nominees for SPIE Board of Directors
Community
At SPIE, those who can teach, do!
Community
Reflections photo feature: That's random
Community