Fischer's technical interests were in optical system design and engineering, in particular lens design. He was also interested in optical component and system manufacturing, assembly, and testing.

He contributed both financial resources and time to the optics community. He developed and taught numerous courses and co-authored the book, Optical Systems Design with Biljana Tadic-Galeb and Paul Yoder.

A long-time SPIE Member, Fischer served SPIE in a variety of roles including treasurer, editor of OE Reports, chair of multiple committees, and as SPIE president in 1984. Fischer was awarded the Albert M. Pezzuto Award in 1986, and the SPIE Gold Medal in 2000. 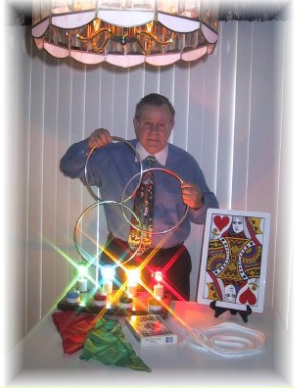 Fischer's memorable and entertaining presentations at conferences were noted for their insights regarding optical aberrations, a list of Bloopers and Blunders in Optics, vacation photos, and magic tricks. An accomplished magician, the photo above appeared in the February 2006, OSSC Images newsletter.

Fischer received a BS and MS in optics from the University of Rochester. Prior to founding OPTICS 1 in 1987, he was assistant manager of the Lens Design Section at ITEK Corp. and then chief scientist at Hughes Aircraft Company.

Recent News
Mental health in isolation
Community
How science informs US policy
What's the hold up with heads-up?
Technology