A decade's worth of advances in five years is the goal of the photonics community and partners, working on imaging, diagnostics and data management.

The "Cancer Moonshot" is a U.S. initiative announced by President Obama in January 2016 that aims to improve our abilities to prevent cancer, as well as fight it more effectively, at an early stage. Various public-private research partnerships will focus on cancer prevention and diagnosis and developing new detection and treatment methods, which can be accessed by more patients.

A key player in this initiative is the National Photonics Initiative (NPI). NPI is bringing together the scientific community, medical technology companies, and over 350 hospitals and major patient advocacy groups across the nation to achieve these goals. "The photonics community and our partners are committed to bringing about a decade's worth of advances in five years," says Tom Baer, executive director of the Stanford Photonics Research Center and chair of NPI Cancer Moonshot Task Force. 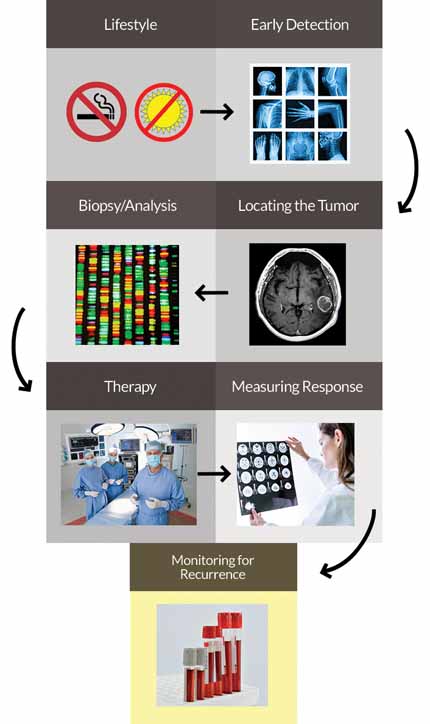 The role of photonics

"Photonics is crucial in scanning," comments Richard Frank, MD and chief medical officer for Siemens Healthineers North America, a Cancer Moonshot partner. "For example, applications include computerized tomography (CT) scans for people at risk for certain cancers, staging for choice of therapy, and tracking the progress of therapy, or the recurrence of disease. Photonics is also useful in guiding biopsy needles, surgical approaches, and radiotherapy to maximize the likelihood of hitting only the diseased tissue, and not healthy tissue."

A main objective of the Cancer Moonshot is screening more people for cancer, and finding it at an earlier stage, before it has a chance to become a life-threatening problem. New advancements in molecular imaging technologies such as positron emission tomography (PET)/CT, single-photon emission computed tomography (SPECT), endoscopy procedures, and other photonics-based imaging technologies will likely make screening more widely available in community-based oncology practices-thereby impacting more cancer patients.

"Photonic-based imaging and diagnostics will enable diagnosis of all cancers at the earliest stages, when treatments are most effective and are often curative," says Baer.

The current national implementation of CT screening for lung cancer is a great test for the application of a photonics technique for early lung-cancer detection in tobacco-exposed, high-risk individuals. The program utilizes the big-data capability of cloud-based computing to support innovative approaches to image quality control-allowing unprecedented precision in clinical management by virtue of the robust precision in quantitative measurements of the lung nodule growth, which is essential for identifying aggressive, yet curable lung cancers. "A surprising aspect of this effort is that these same lung images can be re-evaluated for early stages of chronic obstructive lung disease and coronary artery disease with high accuracy," adds Mulshine. 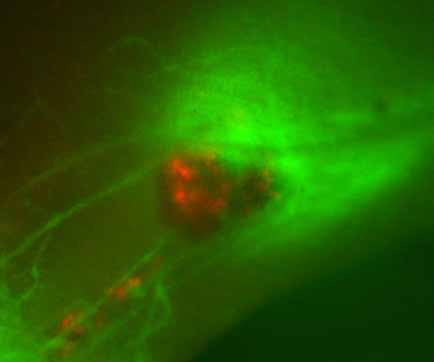 Melanoma cells in red, demarked by a fluorescent protein. The green denotes functional lymphatic vessels, which are the conduits that spread melanoma throughout the body. This is in a mouse model of melanoma. Because the lymphatic system houses the local immune system, this type of technology is essential for research to improve upon checkpoint blockade immunotherapies, a focus of the Moonshot. (Image: S. Kwon, UTHealth)

Real-time imaging to assess cancer burden and immune status of lymph nodes is another example of using photonics to monitor and direct the therapeutic process. Photonics-based diagnostics are increasingly being used to detect and remove tumor-draining lymph nodes in cancer patients. "However, developing photonic-based diagnostics to noninvasively report lymph node cancer status and immune status could revolutionize cancer treatment by enabling new therapies that seek to stimulate the immune system against cancer," Baer points out.

Photonics-based technologies can also directly aid in treatment, once cancer has been detected. A particularly active area of optical diagnostics is fluorescence image-guided cancer resection, which seeks to provide surgeons a real-time intraoperative method to accurately detect cancerous tissues so that all cancer is effectively removed. Currently, resected tissues are pathologically checked for cancer-positive surgical margins after surgery, often too late for the surgeon to insure all cancer has been removed. Positive surgical margins are associated with decreased rates of survival and high incidences of cancer recurrence. "Within five years, optical technologies currently under development may be deployed to eliminate the occurrence of positive surgical margins, thereby greatly reducing rates of recurrence," adds Baer.

Opportunities abound for photonics to contribute to the understanding on the biology of cancer initiation. Whether it is optogenetics, new gene reporters for understanding gene regulation, exosome characterization, or genomic/proteomic profiling of circulating tumor cells, photonics-based technologies will continue to accelerate biomedical cancer discovery in industry, academia, and national laboratories.

Ultrasound has the potential to destroy diseased tissue in a highly focused process, particularly when used in conjunction with magnetic resonance (MR). Another development for the near future is the combination of MR and PET, which brings together MR's exquisite anatomic detail in soft tissue with PET's detection of molecular signals for personalized medicine. "Computer-aided detection and 3-D quantitation have the potential to detect disease at earlier stages by accurate measurement of small volumes-for example, in nodules suspected of cancer, quantifying the rate of growth over time to distinguish benign from cancerous growths, which have higher doubling times," says Frank. "Pharmaceutical companies are also developing disease-modifying drugs which will be prescribed based on the results of early-detection scanning technologies, like PET."

Photonics is a key component in managing the storage and transmission of the vast amount of imaging data that is generated during the detection and treatment of cancer. These big-data challenges can be accomplished more quickly, and at less cost, with the maturation of silicon photonics, which brings optical components into linkage with today's silicon computer chips to transmit electrons. "The excitement with photonic components is that they carry more data farther and faster, without heating up and without degradation in the signal," says Mulshine. "This has profound implications for instrumentation development, wearable sensors, and ultrafast data sharing. This could greatly accelerate the integration of such innovations to enable much more fluid healthcare delivery, such as with integration of personal mobile devices with hospital and ambulatory data systems."

One of the greatest needs for helping the Cancer Moonshot achieve its goals is building an effective IT infrastructure. Existing commercial cloud-based data centers, and the interconnection bandwidths linking them to hospitals and caregivers, already provide data and communication infrastructure to support the dramatic increase in data sharing and data analysis capabilities, while ensuring compliance and protections under HIPAA privacy rules.

However, what is lacking is a national program to organize and support the health IT infrastructure.

These and other R&D efforts will drive innovation over the next five years in areas such as imaging instrumentation, companion diagnostics and image-based predictive assays, and bioinformatics infrastructure that will improve cancer survivorship and patient outcomes in each stage of diagnosis and treatment, at significantly reduced medical costs. "Advancements in optics and photonics technologies, molecular probes, new companion diagnostics and assays, and a national IT infrastructure will all be essential for ushering in the next-generation tools that will benefit patients across the spectrum of cancer management," Baer concludes.

Research progress, increased funding and stakeholder coordination will be essential to the success of the effort, according to the NPI Cancer Moonshot Task Force.