What goes on in the ocean is largely a mystery. An estimated 91 percent of oceanic species are yet to be discovered and only 20 percent of the ocean floor has been mapped.

Part of the reason is that sending instruments into the deep is expensive and difficult. For example, crewed submersibles can cost tens of thousands of dollars a day to operate. As a result, oceanic expeditions are typically feasible only for short durations, leaving gaps in scientists' knowledge of rare events and long-term processes.

"Seventy percent of the Earth's surface essentially is unmonitored," says Giuseppe Marra, a frequency metrologist at the National Physical Laboratory (NPL) in the United Kingdom. "There is a huge lack of data."

But that's starting to change as increasingly sophisticated photonics technology reaches the seafloor. Today, there is a network of more than one million submerged kilometers of fiber optic cables crisscrossing the world's oceans, pulsing with light as data is passed from one continent to another. First laid for telecommunications, fiber optic cables are now also finding expanded use by oceanographers. From measuring earthquakes to monitoring climate change, fiber optic cables are ushering in a new era of ocean science.

Oceans "basically govern the health of our planet," says Deborah Kelley, a marine geologist at the University of Washington. Along with new power systems, "Fiber optic cables are really transforming how we do oceanography."

Fiber optic cables were first placed along the ocean floor in 1988. They added to the bundles of telecommunications cables already stretching across the deep, dating back to the first transatlantic cables installed in the late 1850s. With those cables, the first transatlantic message sent by England's Queen Victoria took 16 hours to transmit. Today, fiber optic cables allow messages to pass at nearly the speed of light, crossing the Atlantic in milliseconds.

While we typically think of transcontinental data being sent to the cloud, it's actually passing through the ocean. In 2015, an estimated 99 percent of data sent between continents was transferred through submarine fiber optic cables. Though more and more investors are exploring satellite constellations for data communications, oceanic fiber optic cables remain the fastest and cheapest way to send information. Even still, laying new oceanic fiber-optic cables can cost hundreds of millions of dollars. Telecommunications companies have historically banded together to split the costs, but today a handful of tech giants like Google, Microsoft, Facebook, and Amazon own or are building their own networks.

Similarly, ocean scientists have come together to build their own networks. Deborah Kelley is one such marine geologist. She is director of the US National Science Foundation's (NSF) Ocean Observatories Initiative Regional Cabled Array, a network of scientific instruments linked by 900 km of fiber optic cables, situated off the coast of Oregon in the US. 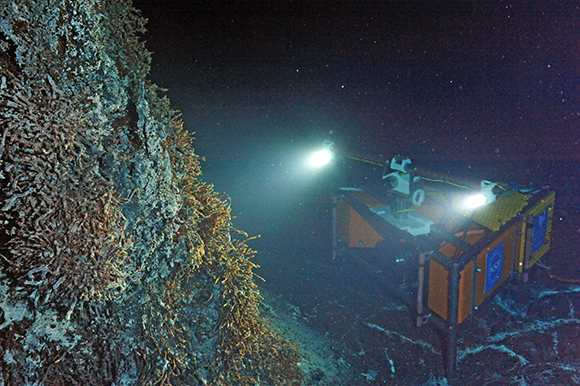 The NSF array hosts 150 scientific instruments—such as chemical sensors, hydrophones, thermometers, fluorometers, current meters, and digital cameras—that measure geologic, chemical, and biologic properties in the ocean. The backbone of the array is fiber optic cables, which transfer the collected data to shore. A copper lining in the cabling pulses with 10,000 volts to power all the instruments.

Through an internet platform, the data from the scientific instruments are almost instantly available to anyone with an internet connection. Thanks to 24-7 monitoring provided by fiber optic cables, that amounts to more than a terabyte of data every day.

"It's kind of like getting your first satellite in space," Kelley says. The array "gives us new insights into the ocean."

The array proved its usefulness early on in 2015 when several instruments in the array, including pressure recorders, captured a massive eruption of the Axial Seamount, a submerged active volcano 300 miles off the coast of Oregon. The event dropped the sea floor seven feet and created a 400-foot-thick lava flow. With 70 percent of volcanism on Earth occurring in oceans, this data helps scientists understand the mechanism behind subsea eruptions and gas explosions.

"The emergence of both fiber optic cables and the internet really allowed these types of measurements to emerge and provide much more powerful technologies than we had before," Kelley says.

Before fiber optics, oceanographic research instruments, like those in the Regional Cabled Array, had to rely on battery power, which resulted in limited observations and data gaps. Today, some instruments in the network can make more than 200 measurements per second, all of which is streamed in real time via fiber optic cables and made publicly available on the internet. This data can now be used to answer questions, such as how microbial communities on deep sea vents change over time, that could not previously be studied.

"You can be sitting in your living room and watch one of the most extreme environments on Earth with really incredible, amazing animals, seeing how they move around over time," Kelley says.

In addition to permanent subsea cables, fiber optic cables are being dropped into the ocean to provide live data transmissions from submersibles. However, it's a complicated endeavor. Load-bearing fiber optic cables can weigh several pounds per foot and sending a fiber optic-connected submarine instrument down to the ocean floor requires industrial scale boats and winches.

"If you want to go 4,000 meters deep in the ocean, you're looking at [a winch] the size of a dump truck to run it," said Brennan Phillips, an ocean engineer at the University of Rhode Island.

Phillips started brainstorming ways to make lighter cables that could transmit live data and was inspired by one of his pastimes—fishing. Working with Nautilus Defence, an engineering consultancy, Phillips and his colleagues redesigned a flexible braided fishing line to house a strand of fiber optic cable threaded through the center. The braided design of the line allows the system to support the weight of an instrument yet remain lightweight. Instead of an industrial winch, the new ultralight system can be easily deployed and retrieved with a standard fishing reel. 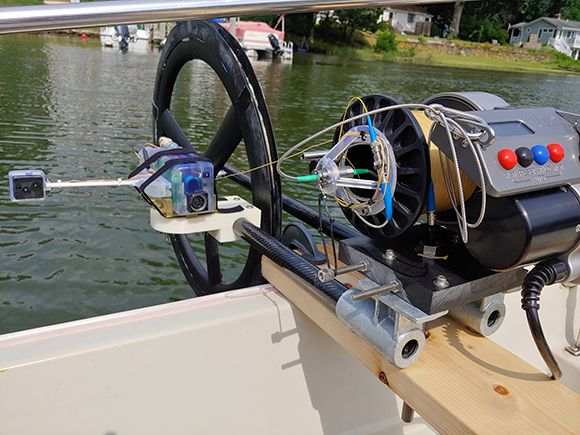 "What that means is I can use really small boats to do my work. And I can go fly somewhere else, where I might be doing my research, with a suitcase essentially," Phillips says. "It opens up all kinds of operational modes that weren't available beforehand. And it's just a lot of fun."

Phillips has tested the line in the waters of Rhode Island's Narragansett Bay in the US, where it enabled live-streamed video of fish, shrimp, and anemones from the ocean floor. In Bermuda, the reel worked down to a tested depth of 780 m, though he's created enough line to reach twice that distance.

As well as connecting scientific instruments, the new line can also be an instrument itself. Fiber optic cables are affected by environmental strains—due to factors like changes in pressure and temperature in their surroundings. These strains add noise and degrade signal strength, so scientists have worked to minimize and remove these effects. But in recent years, scientists have realized that those noises can be seen as signals.

In his work as a frequency metrologist, NPL's Giuseppe Marra tests the timing and frequency of atomic clocks. In 2016, he was testing fiber optic cable linking atomic clocks in England when he noticed an unusual signal. Often environmental vibrations, including local traffic, cause noise signals in data, but this one was different.

Marra eventually pinned the noise to earthquakes that occurred 1,400 km away in central Italy. He was struck by the realization that the noise previously perceived as an annoyance could be a useful signal.

Seismometers have detected earthquakes for centuries, but their use in the oceans is still highly limited by the expense of ocean bottom sensors. Marra realized that hundreds of thousands of existing fiber optic cables could be used as oceanic seismometers.

"You have the possibility of turning the existing submarine telecommunication infrastructure into a giant detector for underwater earthquakes and seismology in general," Marra says.

The technique works by turning submarine networks into giant interferometers. Using an instrument connected to a cable on land, a laser pulse is sent down a fiber optic cable line. If there is an earthquake along the cable line, it will put a strain on the cables, causing a disturbance in the signal. When the light pulse loops back, this effect can be seen as a phase change when compared to a laser signal that remained locally on land. One such measurement can identify a line where the earthquake may have occurred, and measurements from multiple cables can be used to triangulate its epicenter.

With a million-plus-kilometer-long network of fiber optic cables already in the oceans, implementing this technique could massively expand earthquake monitoring worldwide. The technology needed for these fiber optic sensors is relatively straightforward. Only a few dedicated hardware pieces on land and some spare bandwidth are required. 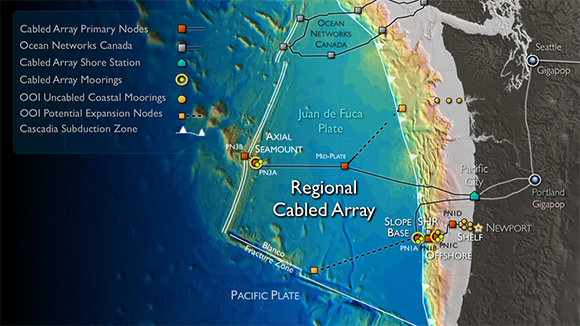 Location of the Regional Cabled Array. Credit: University of Washington

In addition to interferometric sensing, other groups are similarly using fiber optics with a technique called distributed acoustic sensing. This method works in a similar manner by looking for changes in light signals caused by strain to the fiber optic cables. But instead of looking for returned signals, it probes backscattered signals.

Fibers in cabling are designed to be perfect so that they can transmit light with the highest efficiency. But as with any manufacturing, there are always small imperfections and in fiber optic cables, these imperfections cause light to be scattered backwards by Rayleigh backscattering. Looking for changes in this backscattered light, scientists can pinpoint locations where the fibers have been strained—such as by earthquakes.

Developed by the gas and oil industry as a monitoring system, distributed acoustic sensing is showing promise in measuring a wide range of environmental disturbances in the ocean, from earthquakes to swells and currents. Already, scientists have used it to sense earthquakes in California, Iceland, and Alaska.

A similar technique called distributed temperature sensing, which uses Raman backscattering, can even probe strains on fiber optic cables caused by changes in temperature. Phillips is hoping to use this technique with his fiber optic fishing line since the permeable design exposes the fibers to the ocean water.

"The systems I have in the lab are able to sense a 10-kilometer-long fiber optic line for temperature every quarter meter," Phillips says. "That's 40,000 temperature sensors."

Because a backscattered signal is inherently weak, distributed acoustic sensing can only probe out about 50 km offshore, though some think that could be extended up to 100 km. In comparison, disturbance sensing using interferometry has almost no limits. Early in 2021, a group of researchers at the California Institute of Technology and Google found multiple earthquakes and pressure changes due to ocean swells along a cable stretching 10,000 km from Los Angeles, California, to Valparaiso, Chile. In the study, the scientists detected the earthquakes by measuring shifts in the polarization of light sent through the cables instead of phase changes. While polarization measurements aren't as sensitive as phase measurements, they are regularly collected by modern systems, which makes implementation much easier in the short term while hardware for phase measurements improves.

In addition to enabling scientific advances in oceanography, these fiber optic detection techniques could also provide advanced tsunami warnings. With ongoing monitoring, it could provide coastal residents advance warning of tens of minutes—instead of just a few minutes with current systems.

"I think these techniques can really be revolutionary," Marra says. "And we're working hard to prove that."

Mara Johnson-Groh is a freelance science writer and photographer who writes about everything under the Sun, and even things beyond it.