After a century of making movies, one might think that the development of new cinematographic, or cine, lenses for the motion picture industry has neared an end. However, cine lenses continue to evolve, mainly due to the arrival of new optical technologies, and partly due to improvements in related technologies needed for lenses to satisfy ever-more challenging shooting situations.

Some "new" technologies of the past may be obvious today, but were revolutionary in terms of their effect on cine lens capability. For example, improvements in glass with more diverse refractive properties, and the arrival of aspherical optical surfaces for lens elements, where the surface shape is nonspherical but still rotationally symmetrical, have allowed for higher performance but more complex optical designs.

Perhaps one of the most significant technological advances was the advent of optical coatings, which reduced reflections and maximized the overall transmission of lenses. Today, zoom lenses of all kinds are an established alternative, and often complement fixed focal length (prime) lenses. Many movies are shot using primes and at least one zoom lens.

Historically, the movie camera lens and actual film have worked in concert to produce a filmic look highly desired by directors, cinematographers, and cinephiles. The filmic look is partly due to the highly visible grain structure of the various types of film stock. In comparison, images created by cameras employing digital sensors tend to have a clinical look which is similar across different digital camera brands. This poses a dilemma, especially for cinematographers, because the look of an image is a key part of telling a story. If the look is always the same, an important part of the movie goes missing.

Of course, lighting and filtration can be used to change the sterile look of a digital image, but having the lens do this job is generally preferred. Correspondingly, recent development of modern cine lenses has partly moved away from the long-standing tradition of maximizing image sharpness to concentrate more on how to create a filmic look.

Anamorphic scope lenses with cylindrical optical surfaces produce a wide-aspect-ratio, panoramic, letter-box image. These lenses capture images that have a more filmic look than regular flat lenses. Both old and new scope lenses produce interesting residual aberrations including astigmatism, field curvature, and differential depth of field measured in two orthogonal image azimuths, which are characteristics in high demand among cinematographers. In total, these lenses contribute to a preferred organic look with digital cameras and greatly increase the cinematographer's pallet in terms of providing a variety of image looks. 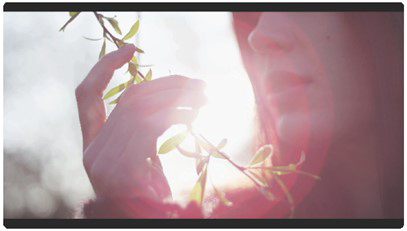 The digital camera image look has recently increased in importance because more movie productions want cost-effective equipment to be used. Correspondingly, new lens types have emerged. Some present variations of old designs, and some are brand new lenses. This activity has spawned a new lens industry where a main goal is to make digital images look filmic. The word "de-tuning" has been coined to describe the changes made to many contemporary lenses. Whether this is a fad and how long it will last are open questions.

De-tuning lenses can happen in several ways, but the basic idea is to take an existing lens, like a cine lens or still-photography lens, then mess up the lens image by introducing residual aberrations. The aberrations can be used to soften the image, introduce flaring, distort the image in some way, and so on.

Introducing aberrations can be accomplished by removing lens coatings or scratching them, and/or removing, inserting, and turning around existing lens elements individually or in some combination. These kinds of actions have reached a point where almost anything goes and just about any resulting image look may become in vogue. It should be noted that this soft-looking image is not out of focus.

Another approach that gives a different or changing image look during the filming of a movie involves alternating the camera used, for example, changing from film to digital and small format to large format. A good example of this is the movie The Revenant, starring Leonardo DiCaprio, which started out shooting on film but eventually was shot entirely digitally due to the harsh weather conditions in the Canadian Rockies. Both Super 35 mm and 65 mm cameras (60 mm image circle diagonal) were used, as were different manufacturers' lenses, some being very wide angle to get an interesting perspective.

There is a lot of marketing hype that goes along with de-tuned lenses because of demand for image-look differentiation, but one must remember that, going back to at least the 1950s, the de-tuning of anamorphic lenses was common practice. Even back in the 1920s, lenses like the vintage Cooke® Speed Panchro® lenses offered a distinctive look that is similar to some of today's de-tuned lenses.

Cooke Optics recently developed modern Panchro lens versions of the legendary speed Panchros with the same imaging characteristic look. The lens can create a mixture of colored ghosting, flare, and sharpness combined with softness, and the trademarked Cooke Look® which provides a pleasant facial image including skin tone.

Digital-camera technology continuously changes. The progression away from the smaller Super 35 mm image format with a 31.1 mm image-circle-diameter to the larger full-frame image format with a 43.3 mm image-circle-diameter affects lens size, weight, and cost, and produces a different depth of field, which affects the image look. Of course, there are also specific optical design improvements that make lenses perform better with a digital camera. These include reduced lateral color for less color fringing of the image; near-telecentric light output to maximize sensor efficiency of light collection; and reduced narcissus for less ghosting emanating from the sensor.

Looking ahead, lens technology may continue to shift away from clinically sharp digital images to those with an organic filmic look. Lenses will likely cover a variety of different image format sizes, with a trend towards being more compact, lighter weight, and lower cost. Whereas in the past, lens technology developed mainly on its own, future lens development may be more dependent on nonlens technology such as camera sensor development. We can also anticipate changing and probably lower-cost movie production as compared to the past.

This is a story of cine-lens technology becoming increasingly driven by a rapidly changing business, and aligning with marketplace-driven movie production technology.

Iain A. Neil is an SPIE Fellow and recipient of 12 Academy Awards for Scientific and Technical Achievement, two Emmys, and the Fuji Gold Medal for his work in motion picture cine optics. His company, ScotOptix, provides optical technology, business, and intellectual property expertise worldwide.