Following the 2014 Nobel Prize in Physics, awarded to Shuji Nakamura, Hiroshi Amano, and Isamu Akasaki, and increasing global concerns for the environment, gallium nitride (GaN) light-emitting devices have received extensive attention, especially in the field of lighting. Consequently, they are now manufactured in volume. However, for laser machining purposes, more power is required than these blue lasers can provide.

The key advantage to a blue laser is its short wavelength compared to its infrared (IR) peers. For nonferrous metals, the absorption of light energy increases as the wavelength of light decreases. For example, the light absorption of copper at wavelengths below 500 nm will increase by at least 50 percent as compared to IR light. So short-wavelength lasers are more suitable for copper processing. The problem is that it is difficult to develop short-wavelength high-power lasers for these industrial applications. The existing options are expensive and inefficient.

To meet these challenges, industry has set their sights on the blue semiconductor laser based on gallium nitride materials that can directly generate laser light with a wavelength of 450 nm without further frequency doubling.

With the emergence of high-power blue semiconductor lasers, their potential in laser processing highly reflective metals, like copper, are being realized every day, especially in the manufacture of electric cars and batteries where a lot of copper and other nonferrous metals are used. The results show that a blue laser welds copper with little spatter, and cuts copper well with high speeds. It can also 3D print copper material-based structures. Because its wavelength lies in the transmission window of the ocean water, the blue laser also opens the door for underwater laser processing. One would expect that high-power blue semiconductor lasers will become the preferred laser choices for processing highly reflective metals.

Apple drove the industrial adoption of ultrafast lasers in a 24/7 production environment. In 2017, ultrafast lasers found their way into contract manufacturers like Foxconn to process sapphire, glass, and flexible printed circuits for iPhones. Since then, we have seen rapid growth of industrial ultrafast lasers at the hundreds-of-watts power level. To make these lasers more robust turnkey tools for industrial customers, the main challenge remains the cost of ownership, as the ultrafast laser market is very elastic. Price goes down and volume goes up.

With the advent of 10 kW ultrafast lasers, and even 20 kW on the horizon, potential applications are expected in areas like large surface functionalization or parallel processing, secondary sources generation of EUV or XUV, new data storage technology, and plasma channel generation for direct energy programs.

So, is there a theoretical limit on how much power one can achieve from ultrafast lasers? There is no physical reason why ultrafast lasers should not be as scalable as continuous-wave lasers. There is actually a clear roadmap to a power level beyond 100 kW, and a number of applications are asking for these power levels, such as space debris removal and particle acceleration. High-power ultrafast lasers will have a very bright future.

The scaling of the multi-kW ultrafast fiber laser is based on the coherent combination of several individual beams. Credit: Fraunhofer IOF

EUV lithography is the key to today's most advanced semiconductor chips, which are the foundation of our modern society's rapid digitalization. They enable applications such as autonomous driving, 5G networks, artificial intelligence, data storage, and cloud computing. CO2 lasers are used to generate EUV sources, which is the foundation of the most advanced lithographic tools in the semiconductor industry. EUVL took more than two decades to develop with involvement from more than 1,000 companies and institutions around the world, and it is backed up by more than 2,000 patents.

Several foundries have moved into production at both 7 nm and 5 nm with EUV systems, but now the industry is preparing for the next phase of the technology at 3 nm and beyond. It is expected that 3 nm node chips will be made possible with a higher NA (0.55) lens in 2022 or 2023, followed by 2 nm node chips a year or two later. Nonetheless, it will require massive funding and time to develop these future EUV technologies, and the return on investment is unclear.

While EUV lithography will be the key technology in making chips for the next decade or so, it is anticipated that 1 nm node will probably reach the limit of the EUV lithography capability, even with optical and material tricks. It is limited not only by the EUV source, but by EUV scanners, masks, and resists, as well as inspection metrology. So a question arises—what is next after EUV lithography? 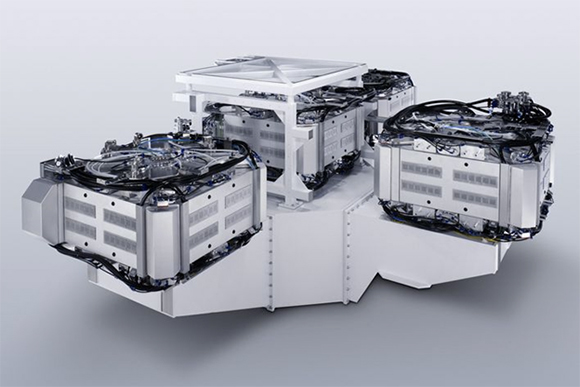 Nanoimprint lithography (NIL) is positioned to succeed EUV as the most popular choice for next-generation lithography due to its inherent simplicity and low cost of operation, as well as its success in the LED, hard disk drive, and microfluidics sectors. The key advantage of this lithographic technique is the ability to pattern sub-10 nm structures over a large area with a high throughput and low cost.

While all three of these laser types are improving, there is still much work to do before their promise is fully realized. Over the coming years, we will see industry working to overcome today's challenges, and the impact of lasers on our day-to-day lives will steadily increase.

Bo Gu founded his consulting firm Bos Photonics, specializing in next-generation photonics technologies and markets, after more than 30 years of professional experience in R&D and corporative executive positions in the photonics industry.