Graphene Commercialization Moves into the Black

The world has heralded graphene's remarkable properties since its discovery in 2004-and now optoelectronics looks set to lead the way in exploiting them fully. Among the companies driving this trend is the Aachen, Germany-based nonprofit research center AMO, which on 7 January 2020 founded spinout Black Semiconductor to commercialize its findings. The new company is working on integrating silicon and graphene to exploit optoelectronics in computing, including in processors for artificial intelligence (AI). "We're working on a lot of very ambitious ideas," says AMO researcher Daniel Schall, who is now chief executive officer of Black Semiconductor.

AMO, having researched graphene for more than half its lifetime, is well positioned to exploit the wonder material's exciting properties, including electron mobility over 100 times greater than silicon. AMO was founded in 1993 by RWTH Aachen University semiconductor technology researcher Heinrich Kurz. "He was looking for experiments that were already supported by fundamental research and one step closer to something that might be interesting for industrial applications," explains Schall. "This is the focus of AMO-to use what sounds interesting from a basic research perspective, but is too early for industrial involvement. This is the bridge that AMO tries to build."

One aspect of AMO's work is therefore strongly research focused, backed primarily by public funding. But AMO also offers a semiconductor foundry and prototyping service that is more industrially focused. "We can process wafers with lithography and etching-everything you need for semiconductor technology, specifically silicon photonics and graphene," Schall says.

The research center's first foray into optoelectronics came in 2003 - one year before graphene's discovery - when it started its ongoing silicon photonics effort. Then AMO's Max Lemme led its first graphene project in 2006. Lemme had the right pedigree for this ambitious effort, as he is thought to be the first person in Europe to produce tri-gate silicon transistors. "The project partners were asking, ‘Why are you doing stupid stuff? This is never going to work,'" Schall recalls. Lemme disagreed, and these devices are now widely used in logic devices in the form of FinFETs.

By 2011, Schall and his colleagues had developed their first waveguide-integrated graphene photonics devices, and they published their results on detectors and modulators in 2014. "After that it was clear to me that all the process steps we did so far on single chips should be possible on wafers," he says. "The focus changed towards wafer-scale process development where we demonstrated first results in 2015. Today we have a graphene photonics platform and we fabricate more than a thousand devices on a wafer, which enables us to perform prototype development."

The studies AMO has conducted on silicon photonics make the research center highly aware of challenges faced when trying to make devices that combine high-performance photonic and electronic functionality. One option is to use indium phosphide (InP) devices, and then bond them to silicon wafers, but this has "certain drawbacks on the fabrication and scaling side," Schall says.

Wholly silicon devices are easier to make, but they require difficult tradeoffs. "Electronics and photonics have completely opposite requirements," Schall notes. Because the silicon photonics market "is dramatically increasing," AMO has "had a lot of silicon photonics projects and we have resolved a lot of problems," he adds. Nevertheless, Schall cautions that users must accept some performance restrictions with all-silicon photonics and electronics.

Inevitably, optoelectronic integration based on graphene is promising because of its unique properties. On the electronic side, these include graphene's well-known high electron mobility. But graphene is also intrinsically a broadband light absorber. "This combination of optical properties and the speed of the devices allows integration into several different platforms," Schall says. "This is what makes it so wonderful and so interesting."

Schall explains that these two properties influence each other in optoelectronics in three key functions: modulator, detector, and phase shifter. In such devices, graphene's high electron mobility influences how electron and hole charge carriers behave. For example, charge carriers form when photodetectors absorb light. "The interaction of electrons with the lattice, the time constants involved there give the speed of a photodetector," Schall explains. With graphene, the time constant is in the picosecond range. "If you convert it into bandwidth, it's terahertz," Schall says. 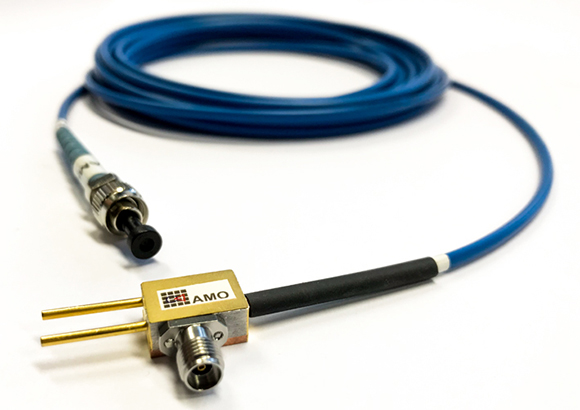 Charge carriers also help control the modulation process, switching graphene from absorbing light to letting it propagate. "You build a capacitor, which has two plates made of graphene," Schall explains. "Once you start charging these, you put carriers on this capacitor, which changes the optical properties," he says. "The change of optical properties in graphene happens much more efficiently compared to silicon. With optimized designs, the speed of graphene devices can surpass silicon as well. This explains the interest in graphene as a photonic material."

In exploiting this, Schall intends to follow the example set by silicon photonics in communications within data centers, where optical technology "can perform orders of magnitude better than copper wires," he says. The success in this area means that AMO is now doing less research on it than previously.

"Most problems have been addressed so far and we are moving into a different stage. Foundries like TSMC or GlobalFoundries are taking over. Market forecasts indicate that the market for transceivers used in data centers will be in the range of $30 to $40 billion in 2025."

Schall suggests that similarly, processors based on graphene optoelectronics can also perform much better for AI than conventional electronics. Intel forecasts that the AI chip market will be worth $27 billion, but trying to predict what that market might be worth in more than five years is like looking into a crystal ball.

Yet, Black Semiconductor does plan to demonstrate the graphene photonic circuits on electronic circuits over the next three years. After that, it intends to move to foundry-ready process steps. "This has to be available in large scale," Schall stresses. "The performance of graphene modulators and detectors has to be very high speed, and we must have mass production with silicon in one unit."

Andy Extance is a science writer based in Exeter, United Kingdom. @andyextance