Combining imaging modalities is helping neuroscientists find new ways to see the brain and nervous system
01 January 2022
By Rebecca Pool
Technology
A digital montage of a zebrafish embryo from Ernst Stelzer and colleagues at EMBL in 2008. The image was the first complete developmental blueprint of a vertebrate. Stelzer and colleagues used DSLM to track all cells in the embryo for the first 24 hours of its development. Credit: Keller et al/EMBL

What do you get if you cross a giant microscope lens with a light sheet microscope? The answer is an optical microscope on steroids that is shaking up the field of brain imaging.

Light-sheet microscopy (LSM) is already widely used in many fields. Thanks to its low phototoxicity and fast imaging relative to other 3D biological imaging techniques, such as confocal and multi-photon microscopy, researchers have been clamoring to use the method to study myriad live samples. Think single cells, organoids, entire plants, the developing embryos of Drosophila fruit flies, C. Elegans nematodes and mice, and more recently, small-mammal brains.

In LSM, a sheet of laser light illuminates a thin slice of a fluorescently labeled sample with the resulting fluorescent light emission recorded using microscope optics placed perpendicular to the light sheet. The entire light sheet can be moved relative to the sample to collect sets of 3D images, and because these scans take place using a plane of light, the microscope can capture images up to one thousand times faster than, say, a traditional point-scanning confocal microscope.

Now, a novel, mammoth objective called Mesolens is about to up the game for LSM. 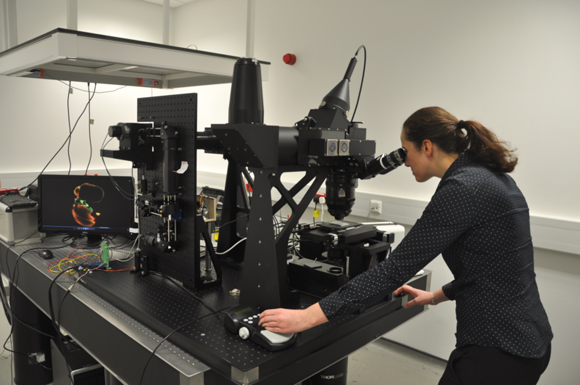 Gail McConnell, Strathclyde University, with the Mesolens that she also uses with a light-sheet microscopy setup. Credit: Courtesy of Gail McConnell

Pioneered by Scotland-based University of Strathclyde optical physicist, Gail McConnell, and optical instrument designer, Brad Amos, from the Medical Research Council Laboratory of Molecular Biology, UK, the Mesolens has a massive 6 mm × 6 mm field of view yet offers the fine resolution of a microscope objective with a lateral resolution of some 600 nm. When fitted onto a confocal microscope, the lens can image specimens up to 3 mm thick and has already delivered stunning images of zebrafish larvae hatching, as well as nearly half of a mouse brain.

Yet whenever McConnell presented Mesolens to scientific meetings around the world, she kept hearing the same question: Can you couple your massive objective to a light sheet microscope?

Indeed, a Mesolens-LSM combination has the potential to provide the same quality of images as Mesolens-optical microscopy setups, but instead of taking one week to image a specimen, with LSM it could take just a couple of hours.

"Effectively every meeting we went to someone in the audience would want to speed up imaging with Mesolens in this way," McConnell laughs. "So, we started thinking about whether or not this would be feasible."

Thanks to McConnell and her team, it has been very feasible. To merge these pioneering imaging methods, the Strathclyde researchers devised a clever arrangement of aspheric optics to generate a long, thin light sheet that would fit with the Mesolens' mighty field of view. They have joined forces with University of Glasgow parasitologist, Juan Quintana to use Mesolens plus LSM to understand how pathogen infection can lead to brain inflammation.

McConnell believes the potential for Mesolens plus LSM in brain imaging is vast. She notes that other imaging technologies are available for seeing the whole brain. But they also compromise on spatial resolution or image only small volumes within a large specimen. Few will provide subcellular resolution in 3D from large volumes.

"Commercial light sheet microscopes provide a high-resolution view, but only within a tiny volume," she adds. "The Mesolens-light sheet setup can broaden a researcher's horizons, allowing the same high resolution but with a global view of the tissue."

McConnell is one of many scientists discovering brave new ways to harness LSM to study brain structure or function, or both. Centimeter-sized slices or even entire small mammal brains can be optically cleared and imaged to glean detail on cells and fine neural structures, as well as the numerous connections and networks in between. Neuronal activity within the brains of live, transparent organisms such as zebrafish can also be tracked in real time to help researchers decipher how neural circuits function. 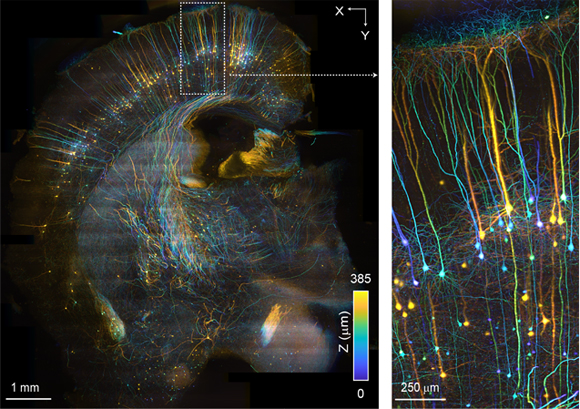 And taking yet another tack, Kevin Tsia from Biomedical Engineering at Hong Kong University recently delivered CLAM (coded light sheet array microscopy) that targets both structural and functional imaging. This method uses a pair of mirrors to divide a single laser beam into 30 to 50 parallel light sheets that can cover a 1 mm-thick sample.

As Tsia points out, using this light-sheet array means a 3D image can be captured simultaneously rather than sequentially scanning a single light sheet through a specimen to build an image. The upshot is gentle, high-speed imaging, which Tsia says is only limited by the camera's frame rate. 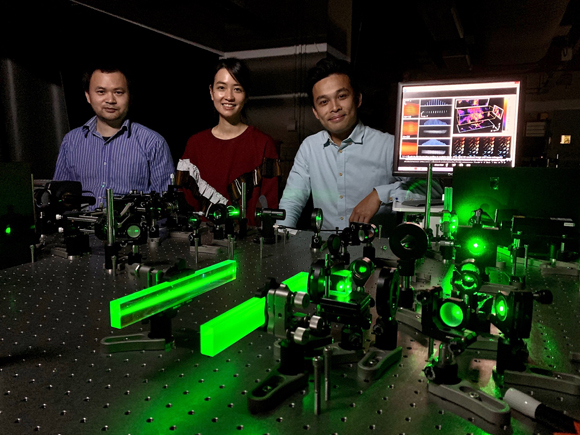 Ernst Stelzer at Germany's Goethe University in Frankfurt, arguably LSM's forefather, delivered his first version of the method-selective plane illumination microscopy (SPIM) just after the turn of this century. Digital scanned laser light sheet fluorescence microscopy (DSLM) followed in 2008. Asked why LSM now works so well for so many researchers, he replies: "If you want to look at live specimens, light sheet microscopy has this niche and I have no clue how it could be filled by any other technique."

"Nowadays, a light sheet setup can record data at least tens of hundreds of times faster than a confocal microscope. If you can look at a thousand specimens a day rather than one, then that makes a huge difference," he adds.

Stelzer started developing the multilens microscopes that led to LSM in the late 1980s at the European Molecular Biology Laboratory (EMBL). SPIM ensued, and the light sheet community has never looked back.

For Stelzer, it's all about observing 3D specimens in as close-to-natural-conditions as possible. "We have to look at objects in 3D, but we also have to look at 3D objects," he points out. "This is in stark contrast to, say, super-resolution microscopy where everything is flat, and cultivated, and prepared on a coverslip."

"Cells don't grow on coverslips, they grow on other cells, and this is the point of what we've been trying to do [with LSM]. We're preserving the 3D structure of the specimen and observing it in close-to-natural conditions," he adds.

One exciting prospect for LSM is to eventually access deeper regions of mammal brains, such as the deep layers of the cortex and the hippocampus, to better understand how memories are made and what goes wrong in cognitive diseases like Alzheimer's. Hard at work in the Nanophotonics, Integration, and Neural Technology lab at the Max Planck Institute of Microstructure Physics in Germany, group leader Wesley Sacher is perfecting his miniature light sheet device that could deliver just this.

Recently, Sacher and colleagues from California Institute of Technology, University of Toronto, University Health Network, Canada, and Advanced Micro Foundry of Singapore, unveiled a light sheet generator in the form of a chip-scale neural probe. The tiny probe generates up to 10 light sheets and in a proof-of-concept study, the researchers inserted it into mouse brain slices as well as the brain of an anaesthetized mouse, to produce high contrast images across areas as large as 240 × 490 µm and at depths of around 130 µm.

Sacher explains that the probes are fabricated on 200 mm silicon wafers and contain dense waveguide circuitry for routing light. Four implantable needles, about 3 mm long and 50 µm thick, protrude from the chip and contain light-emitting grating couplers to generate the light sheets. Laser light is coupled to the probe-chip via a fiber bundle containing many fiber cores that direct light down different waveguide paths to create the light sheets.

It should be noted that tissue damage during imaging has thwarted past attempts at generating light sheets via implantable probes. However, thanks to the ultrathin profile of their neural probes, Sacher and colleagues have dodged this issue and are now refining their probes for even deeper brain imaging.

These will generate a greater number of thinner, more densely packed light sheets for higher image resolution and contrast. Innovations in photonic circuitry design will increase the fiber-to-chip coupling efficiency from around 10 percent to 50 percent, reducing the stray light that heats the probe as well as nearby brain tissue, altering its function.

"Our initial imaging demonstration was at relatively shallow depths in brain tissue but given our efforts on photonic design and head-mounted fluorescence microscopes, I see the demonstration of deep-brain light-sheet imaging being our next big step," he says.

The community can only wait and see what taking light sheets into greater brain depths will bring, but in the meantime, what else could LSM deliver?

Stelzer has some ideas: First, the LSM figurehead is keen to see what happens when the method meets adaptive optics—that is, the use of deformable mirrors and other devices to raise resolution and contrast, and to compensate for the optical aberrations that distort images. Already, sleep studies researcher, François Rouyer, of France's Institute of Neurosciences Paris- Saclay, and colleagues have used an adaptive optics light-sheet fluorescence microscope to scrutinize living fruit flies. Their setup delivers high-contrast images of the neurons that influence sleep, tens of microns deep within the flies' brains.

Stelzer also believes real-time, direct feedback to the image detection system—adaptive recording—will advance light sheet imaging even further. For example, for studies on nervous system development in embryos, such a feedback system could use an intelligent algorithm to register data and then, say, alter illumination to optimize imaging.

Such approaches have been tried in confocal fluorescence microscopy. And as Stelzer says, "These are the little things we can do that will still make a huge difference."

REBECCA POOL is a science and technology journalist based in the UK.