Amp it up: How David Payne made fiber optic communications into a bandwidth superhighway

Invention of the laser triggered a burst of interest in optical communications in the 1960s. Early demonstrations modulated a laser beam or other light source, and transmitted the signal through a hollow tube to a detector that converted the light signal to electrical format. Fiber optic transmission didn't take over until the early 1970s. When tests reached a point where they ran out of light, the experimenters directed the weakened signal to a detector, and directed its electrical output to an electronic amplifier, which in turn powered a second optical transmitter that sent signals through a new length of fiber. The result was an electro-optical regenerator, good enough for some purposes, but far from ideal.

The quest for all-optical amplifiers got serious in the early 1980s. By then, semiconductor diode lasers had matured as light sources and seemed the best candidates for optical amplifiers because they were small, electrically powered, and potentially inexpensive. Research boomed, but the results fell short of hopes. Semiconductor optical amplifiers turned out to have high noise, low gain, became nonlinear at high speeds, and were sensitive to polarization. Fiber-optic system developers began considering alternatives.

David Payne started working in fiber optics in 1967, building the first fiber draw tower in academia at the University of Southampton. "After that, it was like surfing a giant wave, as result after result showed fiber telecommunications was not just a possibility but a high probability," he recalls. He stayed because "photonics is a lot of fun and as an enabling technology there are so many opportunities to move into different applications."

At a time when many labs focused on purifying glass in an effort to reduce losses and extend transmission distances, Southampton developed a reputation for producing special purpose fibers, including polarization-maintaining fibers and metal-containing fibers. In 1973, Payne discovered the wavelength where silica fibers have zero dispersion, and thus the broadest bandwidth, which became the 1.3-micrometer transmission window. In 1974, Payne earned Southampton's first PhD in fiber optics, and turned to developing fibers for sensing.

That led to making fibers with small amounts of rare-earth elements in their cores, as Payne searched for effects that might be useful in making sensors or solid-state lasers. The rare earths were well known for their useful optical properties, with several among the best solid-state laser materials. He started by doping a fiber core with neodymium and putting mirrors on the ends to make a neodymium fiber laser, and was surprised to discover that adding a rare earth to the silica increased light absorption only in the neodymium pump bands, but not at other wavelengths. He also noted that pumping along the length of a fiber could produce a high pump intensity, reducing the laser threshold to a very low level. Both were important insights.

Neodymium fiber lasers were not a new idea. Eli Snitzer had made one in 1961 at the now-defunct American Optical Co. in Southbridge, Massachusetts. However, it had proved impractical because it had to be pumped from the side with a flash lamp, which was painfully inefficient because so little light went into the fiber, and neodymium absorbed even less of that light. Payne found that pointing the narrow beam from a laser down the length of the fiber coupled much more light into the fiber and excited much more light-emitting neodymium.

Payne knew that erbium emitted at the 1550-nm minimum loss of fibers, which would be attractive for amplification, but when he started with lasers, the conventional wisdom was that rare-earth elements could only amplify light weakly outside of a laser resonator. Thulium and ytterbium lasers followed neodymium. Erbium came last because its laser transition includes only three levels, rather than the four levels usually needed for efficient lasing.

Nonetheless, erbium proved a much better laser than expected. Payne performed a long series of experiments and wrote 26 papers on erbium-doped fiber lasers before he removed the mirrors to measure single-pass gain in an erbium-doped fiber. 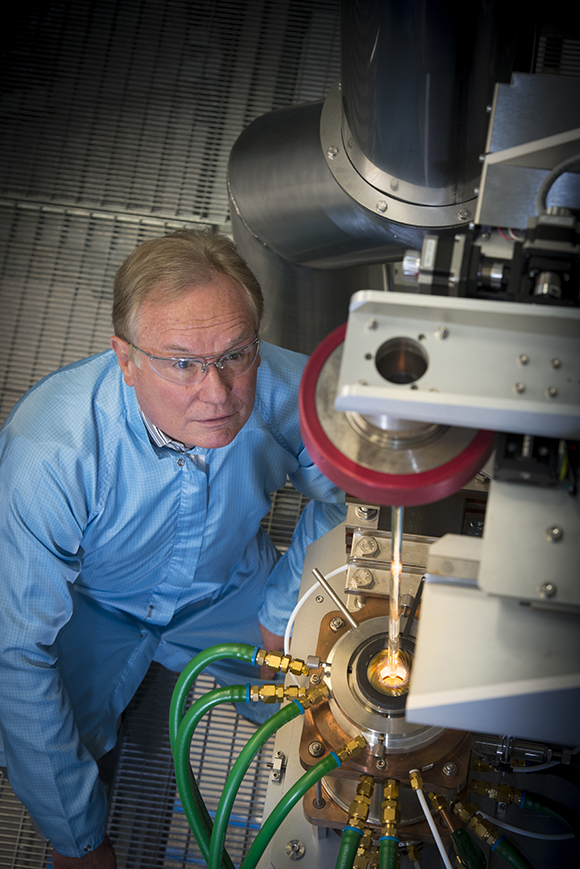 Erbium's 1550-nm wavelength was a logical choice for amplifier experiments because it is where telecommunication fibers are most transparent, but he expected low amplification. He was surprised to see gain peak at an impressive 30 decibels-a factor of 1,000. That made erbium fiber amplifiers a promising challenger to two more widely pursued options: semiconductor optical amplifiers and a then-exotic Raman amplification process in pure silica fibers.

The erbium amplifier still had serious limitations when Payne introduced it at the Optical Fiber Communications Conference in January 1987. "We knew it would be very important, but we did not know it would beat the intense competition at the time from semiconductor diode and Raman amplifiers," he recalls. The biggest concern was its need for pumping by a dye laser, which itself had to be pumped by a massive and inefficient argon-ion laser. With colleagues Simon Poole and Robert Mears, Payne searched the erbium spectrum for better pump bands and soon found that 980 nm offered stronger absorption and lower noise levels.

Erbium-doped fibers have proved almost ideal for communications. Their properties are the best of any optical amplifiers, and their wavelength matches the minimum absorption band of silica fibers. Erbium amplifiers can be cascaded in series to span distances beyond 10,000 km. While early experiments could amplify directly modulated signals at 2.5 gigabits per second, today they amplify coherent signals at data rates of more than 100 gigabits on dozens of separate wavelengths. After thirty years, fiber-amplified fiber-optic systems are bumping up against the fundamental limits on data transmission rates imposed by noise. "I still find it remarkable that despite intense competition, no one has ever managed to supersede the EDFA at 1550 nm," says Payne. Settling for semiconductor or Raman amplifiers "would have seriously limited the capacity of fiber links."

Knighted by Queen Elizabeth in 2013, Sir David Neil Payne has received a long list of awards for his work on fiber amplifiers, including the UK Rank Prize for Optics, the Benjamin Franklin Medal for Engineering in 1998, the Kelvin Medal for applying science to engineering in 2004, and the Marconi Prize in 2008. He has founded companies including Southampton Photonics, and continues to push optical frontiers. His latest enthusiasm is hollow-core fibers, in which a Southampton team in 2020 reported a record low attenuation of 0.28 dB/km, just a factor of two above the lowest loss in pure silica fiber.