Optics Does That? Seeing the World in a Grain of Sand

The rolling sand dunes near Pismo Beach, California—or on a distant planet?

Imagine — you discovered a distant planet, and you can see that parts of it are covered by rolling sand dunes. Sand dunes are formed by wind, which means the planet has an atmosphere! You want to know more about this atmosphere, but how? It's time to call aeolian geomorphologist, Dr. Raleigh Martin.

Geomorphology is the study of physical features on a planet's surface — these features are formed by processes like rain and wind. Aeolian geomorphology is the study of wind-created landforms ("aeolian" comes from Æolus, the Greek god of the wind). By studying features such as sand dunes here on Earth, the physical principles behind their formation can be applied to other planets, like the one we imagined discovering. Knowing how dunes form is also important for the process of restoring dunes that have been eroded or bull-dozed. "Dunes on the beach are the first line of defense against flooding and storm surge during major storms," says Martin. Restoring dunes to their natural form is often far more cost-effective and sustainable than using hard coastal defenses, like sea walls.

There are also applications of aeolian geomorphology for atmospheric climate science. As Martin notes, "There's a lot of dust bound up in the sand grains, and so when the sand moves, dust particulate matter is generated and blown into the atmosphere." And when this dust is small enough, it can be held aloft by wind turbulence for extended periods, affecting heating or cooling of the atmosphere.

Sand dunes and how they form was the subject of Martin's postdoctoral research at UCLA in the Department of Atmospheric and Oceanic Science. "Broadly speaking, I was studying sand dunes, which exist both in desert environments and in coastal environments," says Martin. "Specifically, I was trying to understand the relationship between the strength of the wind and the movement of the sand that forms the dunes." 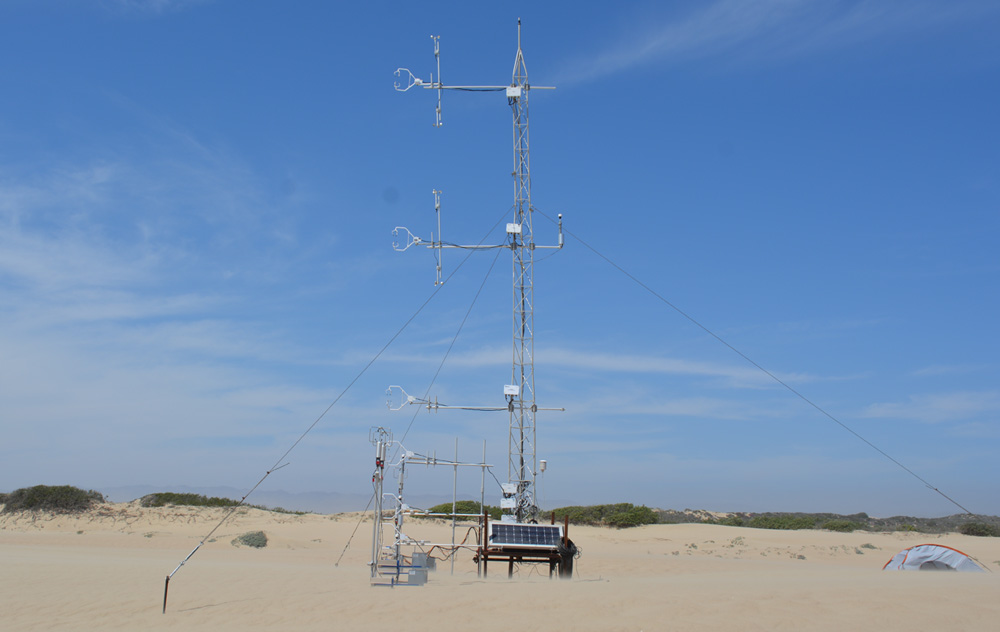 Martin set up instruments in the field to study coastal dune formation. For Martin, "the field" means at the beach. Sounds like a good excuse to get a tan, right? Not for the kinds of measurements Martin was taking.

"The wind has to exceed a certain threshold strength before the sand starts moving. So, we would set up our instruments on days when the wind was high." As an official expert on wind and sand movement on the beach, Martin recommends enjoying the beach when the wind speed does not exceed 10 to 15 miles per hour, the approximate speed at which sand begins moving. At wind speeds of 20 miles per hour, you will probably feel sand blowing on your face. Though he notes that, personally, he prefers the windier days for his visits to the beach.

That's where optics comes in!

The Wenglor devices are fork-shaped attenuation sensors, with a 600-micron-diameter laser beam passing across the gap to a photodetector. The sand grains Martin was measuring were typically 300 to 500 microns in size, so a single grain of sand passing through the laser beam could create a measurable drop in transmission, allowing the sensor to record its passage. The device was configured to send output pulses indicating the passage of particles at a rate of 25 Hz, generating the high-resolution data needed for comparison to wind measurements.

Unfortunately, this particular optical sensor wasn't designed for a sandy, outdoor environment. Aeolian geomorphology is a very niche field, and as such, the market isn't large enough for there to be a wide variety of dedicated measurement tools. So Martin had to use instruments designed for other purposes for his experiments. The Wenglor device was created for a manufacturing environment, which is typically not as clean as a laboratory setting, but is nothing like a windy beach! Dust accumulating on the device could cause measurement drift, as could changes in ambient light. By using using the sand traps in conjunction, Martin was able to provide a robust calibration for the optical measurements. 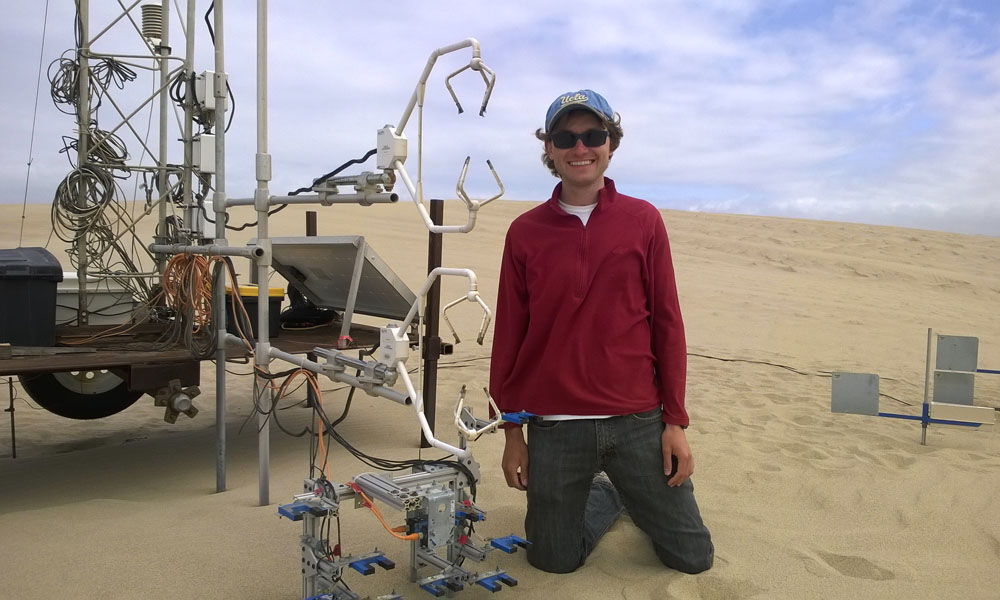 Raleigh Martin at the field site. The sonic anemometers are the white, claw-like devices; the Wenglor sensors are on the ground (left); the sandtraps are to the far right. Credit: Raleigh Martin

"One thing we found, which had been theorized but never directly shown from field data, is that there's a hysteresis," says Martin. His measurements demonstrated that the wind speed necessary to get a particle moving is higher than the wind speed necessary to keep a particle moving. "We know when the wind is really strong, a lot of sand is moving. When the wind is really weak, there is no sand moving. But what is that wind speed above which you go from non-moving sand to moving sand? We were able to tease that out by having this high-frequency signal." This high-resolution data is especially useful in cases of "weak transport" where the wind is near the 10- to 15-mph threshold for sand movement, but in the case of high wind speeds, sand traps are adequate for most measurements.

So now you know. Aeolian geomorphology: optics does that.

Christina C. C. Willis is a laser scientist living in Washington, DC, where she is currently serving on Capitol Hill as the 2019–2020 OSA and SPIE Arthur H. Guenther Congressional Fellow. Her new book "Sustainable Networking for Scientists and Engineers" is available from SPIE Press.

Optics Does That is looking for more stories! Do you, or does someone you know, have an interesting or unusual application of optics that you use at work or elsewhere? Then please send us an email and tell us about it! emilyp@spie.org.