The story behind the invention of the laser typically goes like this. Theodore Maiman, a 32-year-old physicist working at the Hughes Research Laboratories in California, built the first working prototype in 1960. The heart of this device, a synthetic ruby crystal that emitted red light, exploited the new science of quantum mechanics describing a nano-verse of photons, electrons, and other particles. Today, researchers and engineers have developed the technology into models ranging from the gentle red spot of a laser pointer to the behemoth x-ray laser in Germany called the European XFEL, which produces light more intense than all of Earth's solar radiation focused onto a fingertip.

But the laser, it turns out, is not uniquely a product of human engineering. "It would be more exact to say that ... lasers have not been invented but discovered," writes physicist Mario Bertolotti in his 2004 book, The History of the Laser.

Indeed, as a series of astronomical observations would confirm beginning as early as the 1970s: lasers exist in nature.

Experts dispute which astronomical object qualifies as the first discovery of a natural laser. But one oft-cited observation is the 1976 discovery of unusually bright infrared light in the atmospheres of Mars and Venus. Led by Nobel laureate Charles Townes, a group of University of California, Berkeley astronomers deduced that atmospheric carbon dioxide produced this light, and that it brightened and dimmed in sync with sunrise and sunset.

This light, as confirmed by NASA-affiliated researchers in the 1980s, was amplified via the same mechanism that a lab laser produces a beam. They determined this using further observations and models of atmospheric processes on the two planets. In a 1981 paper in Science, they wrote that Mars's infrared light was, to their knowledge, "the first definite identification of a natural infrared laser."

Unlike lab lasers, however, these natural ones did not form clearly defined beams. Instead, the light resembled a diffuse glow. If you photographed Mars's horizon with an infrared camera, the laser "would look like a bright edge to the planet," says NASA astrobiologist Michael Mumma, who helped confirm the two planetary lasers. Analyzing the vertical profile of the light from the ground to the sky, they found that the glow peaks in brightness 75 kilometers above Mars's surface.

Still, Mumma's team referred to the glows as lasers because of how they produced light. The letters of the word "laser" refer to this mechanism: light amplification by stimulated emission of radiation. Some circumstance in Mars's atmosphere, just like in a lab laser, amplified the light like a photon megaphone.

The amplification involves the interaction between two key components known as the pump and the gain medium. The pump is the energy source that fuels the amplification: Maiman's pump was a xenon lamp, while the planetary lasers run on sunlight, which is why the amplified light exists only in the planets' daytime regions. The gain medium is a material that absorbs the pump's energy to emit light. Maiman's was his ruby crystal, while Mars's and Venus's consist of carbon dioxide molecules.

The gain medium fluoresces at specific wavelengths determined by the material's nanometer-scale structure. Maiman's ruby laser emitted red light at 694 nanometers, whereas carbon dioxide emits several wavelengths around 10 microns. With enough energy from the pump, the gain medium can produce light in a process called stimulated emission, in which one photon interacts with the material to emit a new identical photon, thereby amplifying the total light. A human-engineered laser situates the gain medium between mirrors, resulting in further amplification as a single photon traverses through the gain medium multiple times.

To identify a natural laser, astronomers examine the spectra of astronomical objects for unusually intense light. Stars and planets typically emit colors of light in predictable proportions in a spectrum known as a blackbody distribution, explains astronomer Dainis Dravins of Lund University in Sweden. A laser amplifies specific wavelengths, which make themselves known by poking out conspicuously from a measured spectrum.

The carbon dioxide lasers on Mars and Venus amplified the 10-micron light up to 7 percent, compared to the intensity of light without lasing. Mumma says that this amplification is comparable to that of a photon making a one-way trip between the mirrors of a laboratory laser that also uses carbon dioxide as a gain medium.

In 1996, astronomers made another notable discovery-the first natural laser beyond the solar system. This object, another infrared laser, proved to be much more extreme than the ones on Mars and Venus. Searching from an airplane known as the Kuiper Airborne Observatory, Vladimir Strelnitski and his colleagues found the light was produced in the ionized gas disk around the star MWC349A in the constellation Cygnus. This laser, originating about 4,500 light years away, amplified 169-micron light about a thousand times compared to a blackbody distribution-four orders of magnitude more amplification than Mars and Venus. Because the light amplification on Mars and Venus is so low, Strelnitski, now the director emeritus of Maria Mitchell Observatory, claims MWC349A as the first natural laser.

These discoveries weren't a shock. Researchers predicted the existence of natural lasers as early as 1937. Although humans had yet to invent lasers, astronomer Donald Menzel pointed out that such light amplification could theoretically occur in the universe. At the time, however, he speculated that the extreme environments needed to amplify the light would "probably never occur in practice."

Another hint came in 1965, when astronomers discovered the first natural maser, produced via hydroxyl molecules from the direction of the constellation Orion. A maser amplifies microwave radiation instead of infrared and higher energy radiation like a laser, but their physics is identical. In fact, Strelnitski considers the natural maser a more fundamental scientific discovery than the laser. But masers, which exclusively emit radiation invisible to humans, fail to capture the public's imagination. "When you say ‘maser,' people don't know what it is," he says. "They know what a laser is because they see it in the supermarket."

Natural masers occur much more frequently than lasers because they require less extreme conditions to form. This is because it takes less energy for a molecule to emit a microwave photon versus an infrared one. In planetary atmospheres such as Jupiter's, collisions with nearby particles can impart molecules with enough energy to produce and amplify microwave radiation.

Strelnitski anticipated that MWC349A should contain lasers, he says, based on prior observations of masers in the star. MWC349A's gain medium consisted of hydrogen atoms, which produced laser light via two processes, ionization and then recombination. First, UV light strikes a neutral hydrogen atom, ripping away its electron to ionize the particle. Then, during recombination, the newly formed ion quickly recaptures another electron.

Natural lasers and masers enable astronomers to study distant objects they could not otherwise see. "The problem number one in astronomy is the lack of photons from very weak faraway sources," says Strelnitski. "If there is an amplification, then more photons will be in a spectral line." In 2018, for example, European astronomers Cristiano Cosmovici and Sergei Pogrebenko discovered water on exoplanets for the first time because they could observe masers produced by the molecules.

Natural lasers could also aid the search for extraterrestrial intelligence, says Strelnitski. To look for aliens, researchers hunt for unusual signals, especially laser light, which an intelligent civilization might have sent to transmit information long distances. To confirm alien intelligence, they would need to distinguish artificial lasers from natural ones. If it's unclear whether a natural energy source powers the laser light, "it may be a signal of extraterrestrial intelligence," he says.

Humans could also harness the natural laser light to signal to aliens. In the late 1980s, Mumma and his graduate student, Brent Sherwood, wondered whether humans could hijack Mars' and Venus's natural lasers to transmit data into interstellar space. They developed a design that involved building mirrors in the planets' atmosphere and to exploit the surrounding carbon dioxide as a gain medium.

The project, ultimately, was just a thought experiment. "No one thought it was practical, but it was fun," says Mumma.

More recently, though, research on natural lasers has quieted. The lack of momentum could be because the objects are rare and difficult to study, says Mumma. "And once you know a laser is there, what do you do with it?" he says. "In terms of actual usefulness, it really doesn't tell you all that much about the fundamental physics [behind] the spectral lines."

But questions about natural lasers linger. Perhaps the most bewildering case is the object Eta Carinae, located 7,500 light years away and the most luminous star known in the Milky Way.

For centuries, Eta Carinae's rapidly changing appearance befuddled observers of the southern sky. In the 1840s, the star exploded so violently that it expelled about twenty Suns' worth of matter, followed by an encore explosion fifty years later. Gas and dust ballooned outward into two lobes. The explosions also flung gas blobs that, for reasons unknown, move an order of magnitude slower than other ejected material. "If I started listing all the mysteries about Eta Carinae, it would be a real mess," says astronomer Kris Davidson of the University of Minnesota. 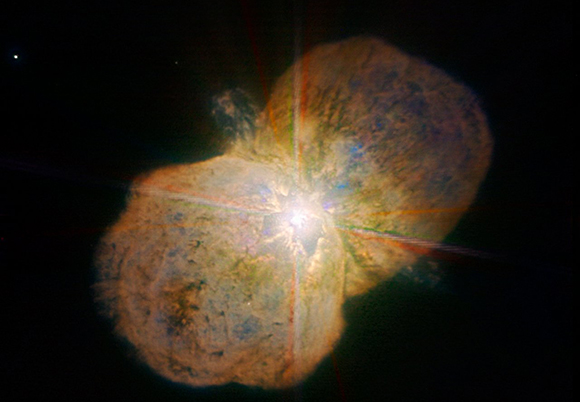 The star is no less temperamental now. Between 1998 and 2008, the star brightened about two orders of magnitude.

On top of all this, astronomers have debated-and never settled-whether the star produces the only known natural ultraviolet laser in the universe.

Two decades ago, Davidson was part of the team that first proposed this laser, which could explain some of the star's strange signals. Iron ions in the star's gas blobs produced thousands of different UV wavelengths, and two unusually bright colors stood out: one at 250.7 nanometers and another at 250.9.

Much of the study of this light can be credited to two researchers: Davidson's colleague, Sveneric Johansson of Sweden's Lund University, and Vladilen Letokhov of the Russian Academy of Sciences. In the 1990s into the mid-2000s, the two wrote several papers on how the star might produce amplified UV light. In the meantime, they showed that the star produced natural infrared lasers.

They later wrote, given what they understood about iron ions in the lab, the star shouldn't be able to sustain a UV laser. If the UV light didn't come from a laser, though, it's unclear what else could cause the amplification. To conclusively show it's not a laser, researchers could measure the distinctive timing that laser photons follow. Future extremely large telescopes may be capable of making these measurements, says Dravins."In principle, this is something we would like to do," he says.

But Dravins and his colleagues have no active plans to do so. Researchers may never know, as Eta Carinae is still rapidly evolving, says Davidson.

Interest in naturally occurring lasers has dwindled. Strelnitski still works with students to further study MWC349A, but he no longer researches astrophysical lasers as actively as before. Mumma, who still works at NASA, changed his research focus years ago. Johansson passed away in 2008, and Letokhov just months later, in 2009. Younger scientists have not filled their roles. It may be that, four decades after their astonishing discovery, natural lasers have receded into just another background glow in the sky.

Sophia Chen contributes to WIRED, Science, and Physics Girl. She is a freelance writer based in Tucson, Arizona.