Bio-plasmonic and bio-electronic devices for human health and performance

Over the years several biochemical markers associated with stress have been identified, such as Cortisol (stress), Dopamine (cognition), Oxytocin (behavioral) and Troponin (exercise, stress). Other markers include heart rate and pupil dilation. These can also be used as metrics to measure workload and performance in individuals.

Naik and his team are working to develop bio-plasmonic and bio-electronic sensors to monitor human performance biomarkers for fatigue, cardiac function, stress, and other biological markers in real-time, in resource-limited settings.

Naik noted that biological materials, such as proteins, are unique in their ability to recognize both biological and nonbiological agents. Peptides, as biological recognition elements, in particular are highly selective and stable. They can be combined with sensitive nanomaterials like gold nanoparticles, graphene or silicon nanowire to develop versatile sensing platforms for ultrasensitive, molecular detection of certain biological or chemical signatures in the body.

"The fundamental question for us is, what are the materials concepts that will help us develop robust, low-cost, easily manufactured biosensing devices that the Air Force can use in the field?" Naik said.

One approach has been to develop paper-based devices. Nanoparticles can be easily captured on a paper substrate, Naik noted. 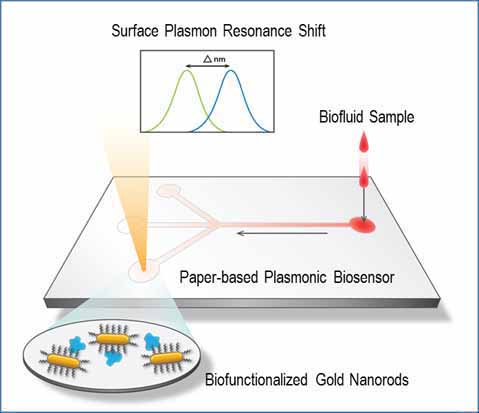 Illustration of a bioplasmonic device on a paper-based substrate. Biological samples are introduced into the sample port and by capillary action the sample is transported through the channel to the detection well that contains gold nanorods functionalized with specific peptide biorecognition elements (BRE). The binding of the target to the BRE results in surface plasmon resonance shift that is detected using a portable spectrophotometer. Credit: Rick Eldridge AFRL/711 HPW

"They become almost solid state, so any manipulation can easily be done on the surface. The particles don't come off, they're very stable. I can take that paper and do all sorts of things to it," he said.

The need for biosensors in the civilian and military sectors are expected to increase in the future, due to emphasis on human-machine teaming and advances in human sciences.

"We need to insure those individuals are performing at the right levels," said Naik.