The diffraction limit, also known as Abbe diffraction limit in optics, poses a great challenge in many systems that involve wave dynamics, such as imaging, astronomy, and photolithography. For example, the best optical microscope only possesses resolution around 200 nm, but the physical size of the photolithography process with an excimer laser is around tens of nanometers. Meanwhile, physical sizes in current research and applications in biology and the semiconductor industry have scaled down to several nanometers, which is far beyond the ability of optical waves. According to the Abbe theory, subwavelength features are usually associated with evanescent waves, which decay exponentially with distance from the target. In response to this problem, researchers have developed many ways to bypass the Abbe limit, showing success in different applications. In one instance, the 2014 Nobel Prize in Chemistry was awarded to Eric Betzig, Stefan W. Hell, and William E. Moerner, for their contributions to the development of super-resolved fluorescence microscopy for life-sciences research.

Currently, there are two main approaches to overcoming the diffraction limit in optics: near-field and far-field. The near-field approach utilizes a nanosized tip scanning over the sample and directly interacts with those evanescent fields. As a scanning approach, it provides high-fidelity images but is always time-consuming. On the other hand, far-field approaches, such as stimulated emission depletion microscopy (STED), stochastic optical reconstruction microscopy (STORM), and structured illumination microscopy (SIM), are based on fluorescent labeling, restricting them from broader applications—for instance, in the semiconductor industry. A more fundamental approach is needed—one that is free from near-field scanning and nanofabrication as well as fluorophores. 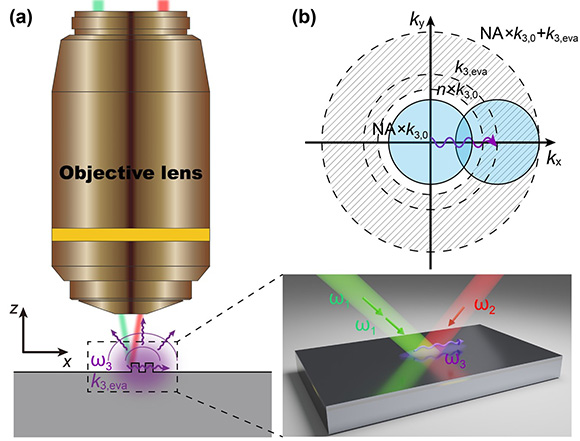 A team of researchers from Shanghai Jiao Tong University recently developed an alternative way to break the Abbe diffraction limit and realize subwavelength imaging in an all-optical manner. As reported in Advanced Photonics, they propose localized evanescent-wave illuminations, which are excited at the silicon surface by four-wave mixing, a third-order nonlinear optical process. Such excited waves help to realize super-resolution through the way that they scatter part of the evanescent fields of the target into the far field. By varying wave vectors of excited waves, parts of different orientations in Fourier spectrum can then be obtained. Combined with an iterative reconstruction technique called Fourier ptychography, these multiple Fourier-spectral parts can be stacked together, recovering an enlarged Fourier spectrum that includes evanescent fields—thereby realizing super-resolution imaging in the far field.

Probing the evanescent waves around a target, the team realizes label-free, nonscanning subwavelength imaging in the far field. The authors note that their results also show promise for a new type of high-resolution photolithography mechanism: constructive interference of such excited near-field evanescent waves can focus light into tiny spots well below the diffraction limit.