Multimodalities, Translational Biophotonics, and the Future Trajectories of OCT

Wolfgang Drexler on Optical Coherence Tomography, his work at the Center for Medical Physics and Biomedical Engineering at the Medical University of Vienna, and his new role as co-chair of BiOS at SPIE Photonics West
09 October 2019
by Daneet Steffens
Events, Technology

"Who needs OCT? It's useless. No one needs this in ophthalmology. We have ultrasound, and that's good enough." This was the greeting Wolfgang Drexler received from colleagues in the early 1990s, when he was one of the first master's students in the lab of optical coherence tomography pioneer Adolf Friedrich Fercher. "There was very little perspective and appreciation regarding OCT at that time," says Drexler who has been attending SPIE Photonics West since 1996 and who, alongside SPIE Fellow Jennifer Barton is now co-chairing the BiOS conference at that Symposium.

Thirty years later, he notes, BiOS, in conjunction with OPTO and LASE, offers a welcome and comprehensive perspective of the breadth of spectrometry available in both industry and academia. "BiOS is the largest meeting in the biomedical photonics field; it's the meeting I send all my students to," says Drexler. "You start with BiOS' clinically oriented weekend, and then, during the week, you translate into the more engineering, more science-driven sessions. It's great particularly for biomedical and optical engineering students to get a sense of the rich opportunities available to them whether they're pursing PhDs or have business ambitions." And, of course, 30 years on from Drexler's graduate studies, OCT has transformed not just ophthalmology, but a multitude of other biomedical arenas as well.

The focus on translational science and medicine highlighted by BiOS suits Drexler to a proverbial T. Growing up, he was always curious about how things worked. "My parents would go nuts because I took everything apart, whether it was an alarm-clock or an electronic device: I was always curious to look inside and to understand how things work." At the same time, the young Drexler got interested in his grandfather's camera as well as books on human biology. Then there was the miniature railway system. "I thought I wanted to study medicine," Drexler grins. "But here was this railway with its circuits, motors and signals and speed, so I decided to study electrical engineering." 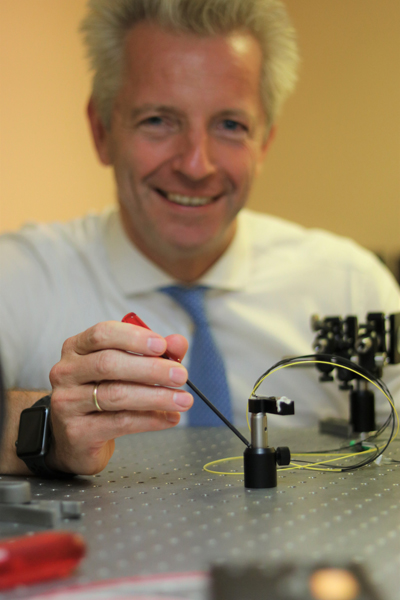 Drexler in the optical endoscopy lab with an early prototype of a forward imaging cystoscope for noninvasive diagnosis in the human bladder, developed in collaboration with the Department of Microsystems Engineering at the University of Freiburg within a European project (MIB HEALTH 667933). Credit: F. Placzek

Quite quickly, a growing interest in lasers guided him toward medical engineering. "Semi-conductor lasers were starting to become attractive — back then it was $2,000 a laser. I was fascinated by laser and laser light. In my studies, I went from spectroscopy to material processing, and I ended up in a seminar giving a talk about laser welding in cardiovascular surgery." It was after that seminar that Fercher approached Drexler, offering him a place on the Masters' program at the University of Vienna. "I said, ‘Yes, I'd like to work on laser welding and cardiology,' but Fercher said, ‘No, this would be for some kind of interferometric method that does diagnosis.'" And the rest, as they say, is history.

A post-doctoral fellowship at the Massachusetts Institute of Technology with another OCT pioneer, James Fujimoto — where Drexler devised and built the first ultrahigh-resolution optical coherence tomography unit — was followed by professorships and research positions in Austria and Britain. Now, as the director of the Center for Medical Physics and Biomedical Engineering at the Medical University of Vienna, Drexler is exactly where he always wanted to be, in a highly personalized niche that straddles medicine, biology, life science, physics, engineering, software, and electronics.There are six OCT groups and 160 scientists within the Center; every team working across the medical and engineering spectrum to discover or enhance the newest opportunities that might address the most critical healthcare issues. One example, notes Drexler, is mind-control prosthesis. "We do a lot of functional stimulation of the spinal cord for paralyzed people," he says. "Using surgery and biomedical engineering, you can connect these protheses to the neural network, so that you can interface once again with the control you had before. In partially paralyzed people, you can ideally stimulate the spinal cord so that they can be assisted to walk again. And there's no implantation process: it's a matter of electrodes and a mixture of pharmacologic therapy and this stimulation." 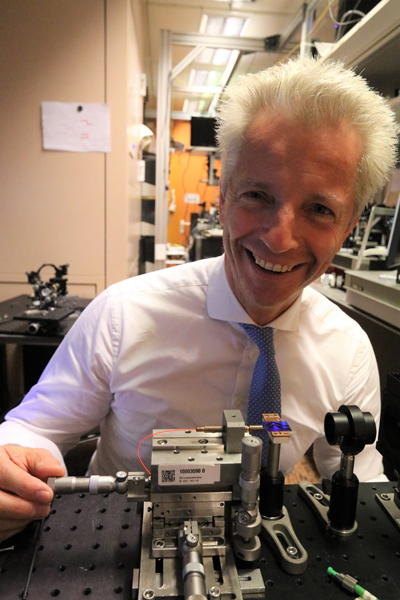 As for growth areas in OCT, from Drexler's knowledgeable perch, the future is brighter than ever. Cardiology is one area that continues to be nicely developed — "there is a fifth or sixth generation of a commercial system checking stents placement and overgrowth"— and OCT's impact on gastro-intestinal issues is also of interest. "I think it offers a very valuable adjunct method, especially now when it comes to multimodal endoscopes that don't just do OCT but also gather molecular as well as metabolic or subcellular information. This new approach will have more impact."

More and more, OCT is also becoming the lower-cost, laser-based, add-on to some of the more expensive technologies, such as photoacoustics and nonlinear optical microscopy. And then there's the proliferating miniaturization of OCT. "Electronics are miniaturized; we can miniaturize optics too - and put them on a chip. You can really package them into really small things, like a handheld probe, or incorporate them into an existing system that would be accessible for low-resource areas. At one point, we'll probably have a small capsule that you swallow and it's so cheap that it won't matter when it leaves the body again. OCT is very established in the $50,000 to $100,000 range in a lot of fields, but there isn't really a system yet that is handheld, one that we could use for oral cancer, for skin, for ophthalmology, for whatever. But if it's portable, mobile, maintenance-free and lower cost, it also must perform properly. We've developed cost-effective systems that didn't perform as well as the expensive ones: The challenge is you have to make it cost effective but still pass the threshold for diagnostics of significance, right? This is an area where I think there is a big, big future for OCT opportunities."

Multimodality, according to Drexler, is another growing area. It's not CT alone, it's not MRI alone: "You get the atomic information, you get molecular information, so you get the best of both worlds," Drexler explains. "The same is happening in optical imaging: you use a technology that is like a GPS that pre-screens the organ — it's very close to OCT, it's faster and microscopic — and then you spot the suspicious lesions that you observe, any kind of subcellular, metabolic or molecular issues. This is where all this Raman and photoacoustics and optical microcopy come into the picture. So this is nice and doable, but translating it to an endoscope with a very small miniaturized probe with a dual or triple modality is really where the future lies. And there are more very low-cost prescreening methods that very quickly give you superb microscopic insight. To fully utilize OCT in this way, to compete with the current pathology techniques, we really have to combine it with different methods."

One of the reasons, indeed, that Drexler took up his current role in Austria is that the Center is a part of a hugely interactive infrastructure. "We're sitting in one of the largest university hospitals in Europe. It's like working in a technical university, but we are also part of a university hospital with 24,000 rooms and 46 clinic and centers, which, for a scientist, is wonderful. If you do science that impacts people's life, where clinicians tell you, 'Hey, this is really helping us,' that is really rewarding. This what attracted me to this interface of engineering, physics, and medicine. We apply demonstrators in gynecology, in dermatology, in neurosurgery and urology — we do a lot of interoperative work. We develop capsules that you swallow for screening the esophagus, we have a laparoscopy for gynecology where we look for endometriosis, and these applications are all very translational, involving basic science, light sources, developing concepts, optical engineering, software, hardware. In terms of translational work in biophotonics and biomedicine, being at this hospital is really great."

Being able to share that work at a conference such as BiOS is even better. Without organizations such as SPIE, notes Drexler, such meetings wouldn't exist. "I think it's important that there is an organization that really brings together all these industry experts and scientific experts," he says. "I'm in a lucky situation where I've never had to actually work in my life. I always tell my kids: the toys just became more expensive. As a scientist, you shoot laser-light into an eye (after ethical and medical device approval) and you're curious to see what's happened. It's like putting together Legos and seeing what you make, or figuring out how the miniature trains run. With an SPIE conference, you enable people to have a wider interest in what's going on in their field. Via SPIE, I can offer my students and the next generation a learning, engaging and networking platform." And his co-chair role is just one of the ways Drexler considers that he can give something back, in the same setting where he's benefited for so many years. "It's on a different level now than it was 20 or 30 years ago - better perspective, more exhibitors, much more translational techniques and information." He shakes his head. "This is so high level compared to then."