We look forward to learning more about Mars as InSight's scientific operations commence.

Seven months and 458 million km after NASA's InSight mission launched from Vandenberg Air Force Base in California, the robot lander sent home a selfie to celebrate its safe landing at Elysium Planitia, Mars. The same cameras that took the photos that have inundated social media sites since touchdown on 26 November are now being used to further the mission's scientific goals.

More formally known as Interior Exploration Using Seismic Investigations, Geodesy and Heat Transport, InSight is the first expedition to study the deep interior of the Red Planet. Information sent back home will help explain the processes that formed and shaped not only Mars, but all rocky worlds including Earth, the moon, and perhaps other bodies in distant galaxies.

Martian geophysics
The inner planets of our solar system-Mercury, Venus, Earth, and Mars-formed over 4.5 billion years ago as hot dusty material accreted into larger bodies. The protoplanets differentiated into layers as they cooled, leading to fully-formed planets that have a distinct outer crust, middle mantle, and inner iron core. But the differentiation process by which the planets evolved is poorly understood.

Ground-based measurements can reveal details about the composition, temperature, thickness, density, and overall structure of each layer. Those properties can give insight to how the layers have evolved since cooling began. Until now, such measurements have only been possible on Earth. Peering inside another, smaller planet will provide a new perspective on how rocky planets were constructed and changed through time.

InSight is equipped to perform three main geophysical experiments from its stationary position on a vast plain near the planet's equator. A package of seismometers will record the seismic waves traveling through the planet, providing information about the composition and structure of the planet's layers. A heat probe will burrow five meters into the ground and measure how much heat is still flowing out of Mars, which in turn will provide insights to the planet's history. And a pair of radio antennas will measure slight changes in the lander's location as the planet wobbles on its axis, providing clues to the depth at which Mars' interior becomes solid and what other minerals may be present.

Interplanetary selfies
Before any of the geophysical instruments can start examining Mars, however, they need to be deployed, positioned on the ground, and tested. Together, the two cameras will allow engineers to construct a 3D digital model of the terrain and determine the best locations for setting down the instruments.

The Instrument Deployment Camera (IDC) is mounted near the "elbow" joint of the 1.8-meter-long robotic arm, which lifts the seismometer and heat-flow probe from the lander's deck and places them on the surface. The IDC can rotate to image both itself and its surroundings, and will provide color stereo views of the landing site. The images will help guide placement of the geophysical instruments and allow engineers to check onboard systems including the solar panels that will power all the instruments.

The Instrument Context Camera (ICC) is mounted under the edge of the lander's deck, designed to take wide angle ‘fisheye' images of the entire area where the instruments are being deployed. In contrast to the IDC, the ICC is immobile. Its 120-degree field of view captures the area of ground within reach of InSight's robotic arm. 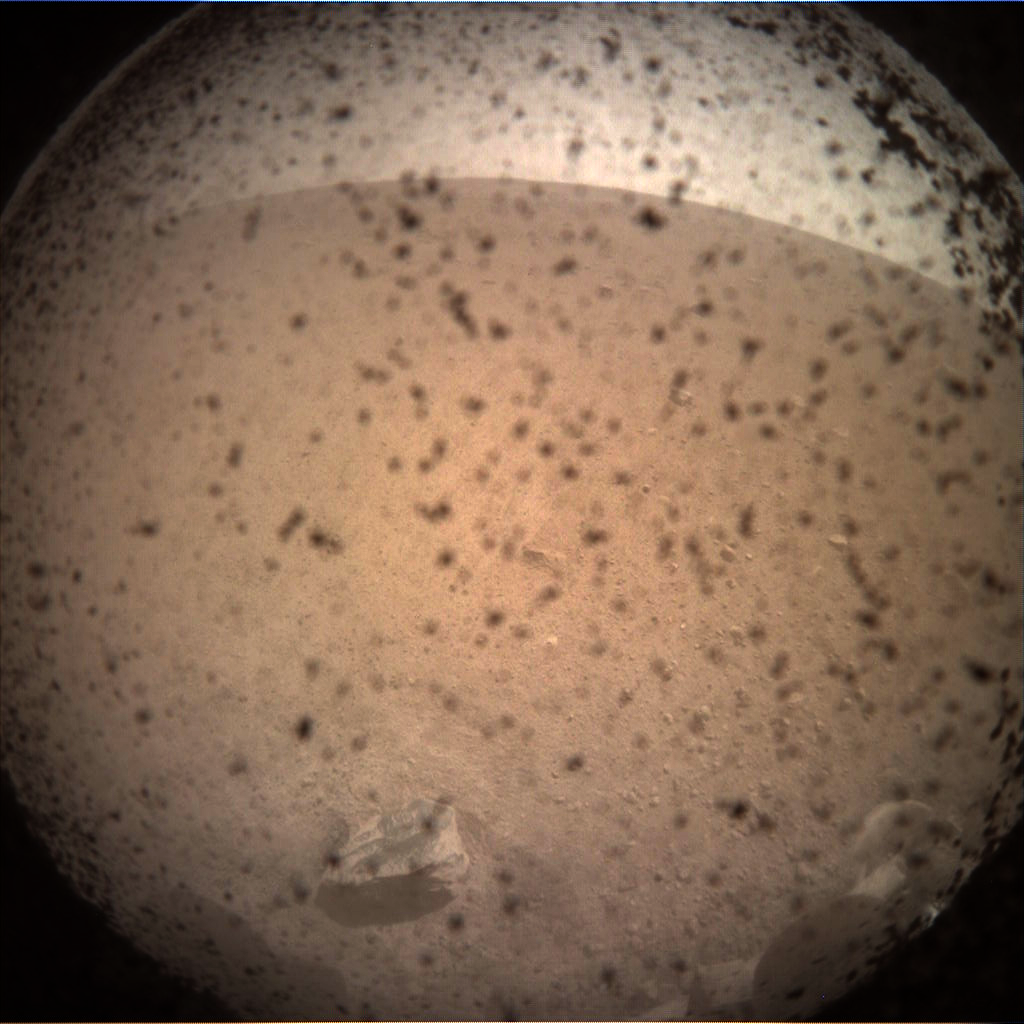 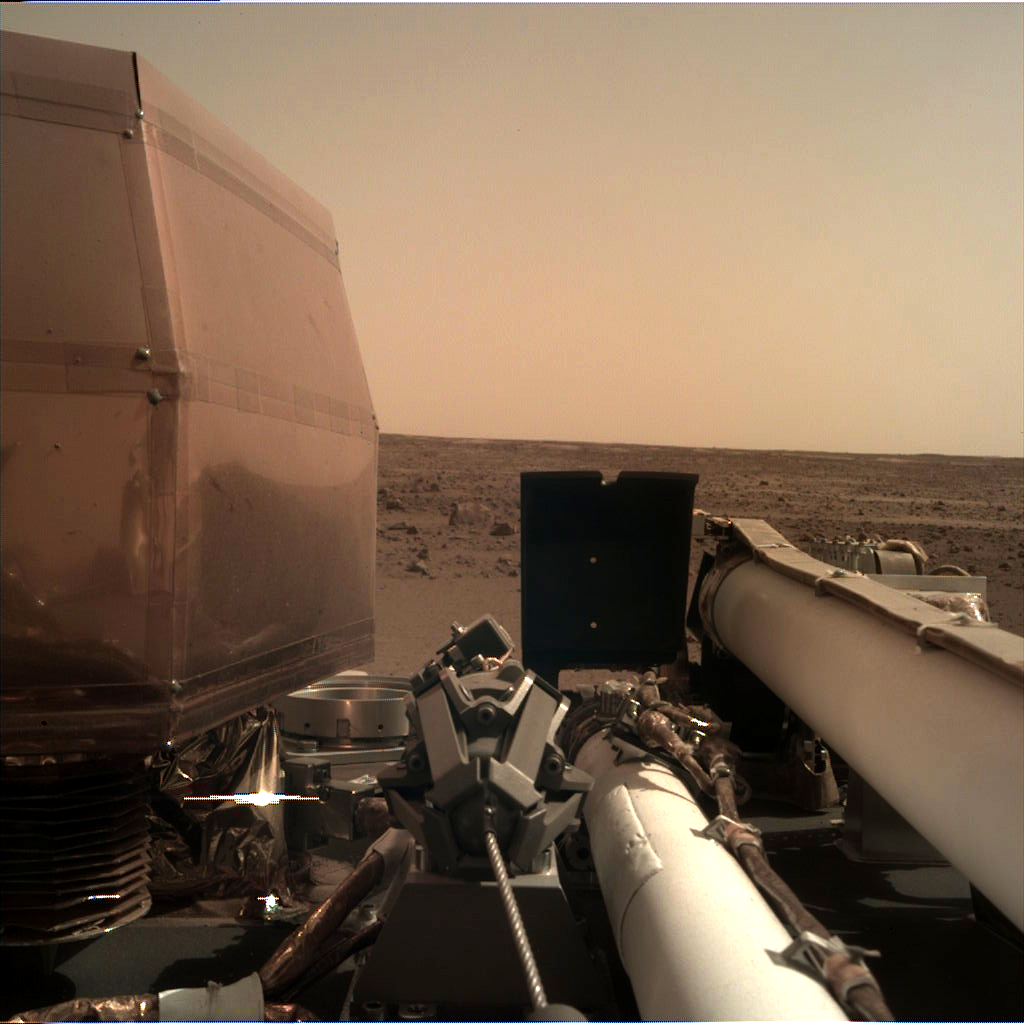 The ICC's first dusty view out and the IDC's robot selfie provided a huge sigh of relief for NASA engineers. Camera team lead Justin Maki says, "I'm very happy that it's all working. We really wanted to get those first pictures back, and the cameras are working phenomenally."

Each day for the next three months, scientists at Caltech's Jet Propulsion Laboratory will send a day's worth of commands to InSight. For Maki and the camera team, those commands include where to move the instrument deployment arm and when to take pictures. Geologists on the Instrument Site Selection Working Group will analyse the data to determine the next day's set of commands and eventually select just the right spot for each of InSight's geophysical instruments, beginning with the seismometer. Finally, the robot arm will release the carefully-positioned instrument. Once the deployment phase is complete, data collection can commence and is planned to last for two years.

The most popular camera on Mars
Although InSight's cameras are just beginning their work, the designs are tried and tested. The cameras are based on black-and-white navigation and hazard cameras (NavCams and HazCams), from the Mars Exploration Rover mission which began in 2003 with the rovers Spirit and Opportunity. Each rover carried ten cameras. Another twelve cameras flew on the Curiosity rover that has been exploring Mars' Gale Crater since 2012. The NASA rovers used those cameras to produce 3D maps of their surroundings so that they could navigate autonomously.

The InSight team used spare black-and-white cameras that had been built for Curiosity and added color capabilities. That was a relatively simple conversion that involved unsoldering the detectors and placing a color filter array over the original pixel sensors. The cameras have a 1024 x 1024 pixels square charge-coupled device (CCD) detector.

To survive a Mars mission, the cameras had to be specially designed to survive the extreme daily thermal cycle on Mars as well as the harsh vibrations of the launch. Low power consumption was also vital, as the cameras would not have their own batteries and instead will be powered directly from the lander's solar array.

Maki adds, "Because these are copies of the original [Mars Exploration Rover] design, we've flown 34 cameras before this. These are numbers 35 and 36, which is unique for us." Reusing camera designs has helped the team to amortize the cost over a decade of Mars missions. Now, the team is developing versions that reap the benefits of higher resolution sensors and more capable electronics.

Camera-carrying chaperones
A separate NASA technology demonstration mission accompanied InSight to test the limits of two miniature spacecraft, or CubeSats. The Mars Cube One mission (MarCO), launched alongside InSight and sent briefcase-sized CubeSats MarCO-A and MarCO-B to monitor InSight during its landing on Mars' surface. They succeeded in relaying information back to Earth in real-time. As the first CubeSat mission to leave Earth's orbit, MarCO was a test of new technology but was not required for InSight's success. After "watching" InSight land from 4,000 km above the surface, the two CubeSats skimmed skim past Mars and, without enough power to remain in Mars' orbit, fell into orbit around the sun.

During entry, descent and landing operations of Mars missions including InSight, information from the planet was transmitted in the ultra-high frequency (UHF) radio band to NASA's Mars Reconnaissance Orbiter, which has been orbiting Mars since 2005. The orbiter, in turn, sent information to Earth in the X-band radio frequency. But because MRO cannot simultaneously receive information in one band and transmit at another, transmission took over an hour to relay to Earth. 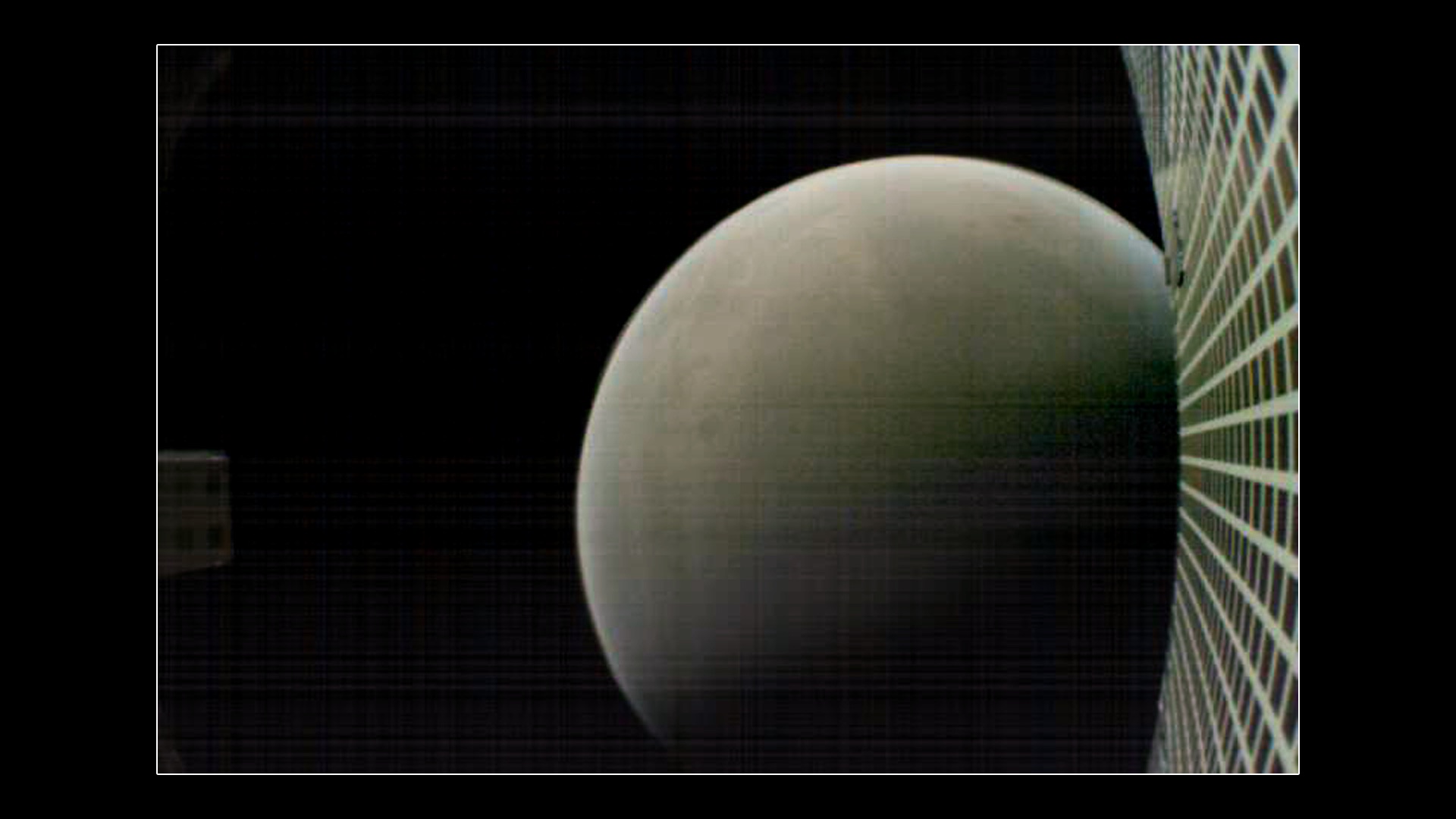 MarCO-B took this photo of Mars from about 7,600 kilometers away during its flyby on 26 Nov 2018. Credit: NASA/JPL-Caltech

MarCO proved that a low-cost interplanetary spacecraft could provide an independent communications relay system during the critical moments between InSight's atmospheric entry and touchdown. The specially-designed radio on MarCO receives in the UHF band and simultaneously transmits in the X-band. It delivered information received from Insight to Earth with no lag time other than the transit time of the signal moving at the speed of light, a mere eight minutes. "We were really trying to take two small spacecraft and get them to Mars, and use them to relay data back on entry, descent, and landing," says MarCO chief engineer Andrew Klesh at JPL. Onboard cameras were an added bonus.

Consumer-grade wide- and narrow-field robotic cameras by California-based Gumstix helped engineers evaluate how MarCO's antennae deployed in space, capturing images to check their positioning. With limited budget and scope, off-the-shelf cameras were a necessity. "One important thing for spaceflight is that we want something that's been proven, rather than the newest thing out there," adds Klesh. "We wanted an easy interface, and spent a lot of time building a smart driver."

As the two CubeSats completed their flyby, MarCO-B turned around and snapped a farewell photo of the Red Planet before heading away. Blue Planet residents were thrilled to receive the photo, and look forward to learning more about their neighbor as InSight's scientific operations commence.

Mars from above and on the ground: Malin cameras take us exploring