A Laser and a Magnet Walked into a Box

Magnetic byproducts of the malaria parasite enable a unique optical solution for diagnosis—one that is cheap, portable, rugged, and simple enough for anyone to use
16 October 2019
By Gwen Weerts
Technology

Although malaria was eradicated in the United States by 1951, the World Health Organization estimates that there were 219 million cases of the deadly disease in 2017—mostly in Africa. Spread by infected mosquitos carrying Plasmodium parasites, malaria causes flulike symptoms of headache, fever, and chills, but can rapidly progress to organ failure and death if not quickly diagnosed and treated.

For many years, light microscopy has been the gold standard diagnostic for malaria, but it requires a medically trained microscopist to interpret the slide smears. In resource-poor settings, the sensitivity of this diagnostic can be variable, depending on the quality of equipment and training of clinicians. Current diagnostics also struggle to detect low levels of parasitemia, which means that they fail at early detection, when therapeutic intervention is most effective. Health officials believe that a fast, inexpensive, and easy-to-use diagnostic test could help fight the disease.

Andrea Armani, a physics, biology, and chemical engineering polymath, could be exactly the right person to answer the call. After learning about this global health issue, she brought the problem to her research group—an interdisciplinary team made up of PhDs, postdocs, undergrads, and the occasional high school student—and tasked them to come up with a diagnostic that could accurately recognize early-stage parasitemia, while also being rugged, lightweight, fast, easy to maintain, easy to use, and cheap.

They read up on malaria and learned that P. falciparum, the species of malaria most prevalent in Africa, produces a crystalline structure called hemozoin, which is a byproduct of the parasite formed during its growth cycle. Hemozoin is opaque, birefringent, and highly magnetic.

There's nothing else in the blood that is magnetic, not even the iron. If it was, then kitchen magnets would pose a serious risk for blood clots. Armani thought there could be a simple optical diagnostic that leverages this magnetic property, and the team got to work.

"We wanted to design a system that could be carried around in a backpack," says Armani, the Irani Professor of Engineering and Materials Science at the University of Southern California.

Because handling malaria-infected blood is dangerous, the research team used a hemozoin mimic called β-hematin in their study. Like hemozoin generated by P. falciparum, it has a crystalline structure, magnetic behavior, and similar optical properties. Unlike P. falciparum, it won't kill you if you're accidentally exposed to it.

The first hurdle the team had to jump was solving the problem of establishing "healthy" for a blood sample. Blood is a challenging environment for optical spectroscopy because of the numerous components, including platelets, red blood cells, white blood cells, and plasma, which itself contains proteins, nutrients, hormones, and wastes. These properties are unique to each person, and even within a person those properties can shift depending on time of day and what the person has eaten. The answer, they realized, was a system that could self-reference the normal of the very same sample it's testing.

With this basic design problem solved and the magnetism of hemozoin in mind, the concept came together quickly for the team, which was led by graduate student Samantha McBirney.

A low-power laser light shines through a cuvette filled with a blood sample, and a detector measures the amount of light that gets through the sample. A magnet is then flipped up next to the cuvette, which causes all of the magnetic hemozoin crystals to snap to it, clearing a path for the laser to take a second pass through the sample and establish the sample's normal. A signal difference between those two measurements indicates that hemozoin is present: the patient has malaria. The device can perform this measurement three times in one minute, meeting the requirement for speed.

"Within three samples, if the results are within error, then you can be confident in the result," says Armani.

Addressing the requirement for cost ended up being as straightforward as meeting the requirement for speed. Armani says that the components are nothing special: just a laser, a cuvette, a detector, and a magnet. Although her prototype uses an inexpensive ThorLabs photodiode power sensor and compact laser diode, she says that even cheaper and more readily available components will suffice.

"There have been high school students across the US who have built their own [version of this system] as part of their high school senior capstone projects," says Armani. "Instead of using a detector, they've used their cell phones as their detector, and just a laser pointer. It's truly a very simple system." The magnet is not fancy either: a fridge magnet will suffice.

The group was able to tackle the "lightweight and rugged" challenge by using a 3D printer to create the platform and component bases. This approach also made the unit extremely easy to assemble. It's obvious where each component is supposed to go, and once put together, it's perfectly aligned. The whole unit weighs in at just 10 pounds. 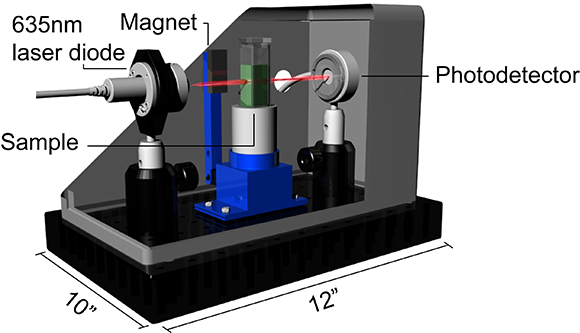 A prototype of the malaria diagnostic uses a simple laser diode, a magnet, and a photodetector. The base and box are 3D printed, and all components have fixed alignment, eliminating the need for fussy adjustments. Credit: Andrea Armani

As for ease of use, that's where the group is still working to improve the device. Armani's goal is to decrease the sample size from 400 µL of blood to 200 µL of blood, which is just one to two drops, and could be accomplished by a finger prick instead of a blood draw. If that phrase sounds oddly familiar, it's because disgraced Theranos CEO Elizabeth Holmes publicly—and now infamously—made false claims about diagnostics that could be performed from a single drop of blood.

Holmes's numerous deceits were exposed in a widely publicized book by Wall Street Journal reporter John Carreyrou in mid-2018, the week before NPR ran a story on Armani's malaria diagnostic. "The timing was terrible!" says Armani. "I was like, can there be anything worse than a female talking about ‘one to two drops of blood' right now?"

To accomplish the finger-stick goal, Armani's group is considering their options. One hurdle they face is that the cuvette needs to be completely filled in order to get the path length of the signal through it. However, it may be possible to produce an accurate diagnostic using half as much blood, and then diluting it to fill the cuvette.

In order to be able to recognize early-stage malaria in a blood sample, you need to be able to detect 50 to 100 parasites per µL. Armani's device can detect as few as 26 parasites per µL in an undiluted sample, so even if they dilute the sample by 50 percent, the sensitivity will still be well within early-detection range.

The next step toward making this test more user friendly is improving the readout for the clinician. Right now, the system produces graphs that have to be interpreted by someone who knows what they mean. That level of information may not be ideal, especially in resource-poor settings where clinicians with minimal medical training could be performing the test and may not understand the clinical difference between, say, 45 parasites per µL and 85 per µL. To make it easier to interpret the results, Armani would like to see a color-coded output that allows clinics to make a decision reliably and quickly.

"If the display has lots of numbers then they have to go to lookup tables, especially if they're doing a bunch of different tests," explains Armani. "If you can just make everything color and graphic based, so it's green, yellow, or red, or smiley and frowny faces, then they don't have to look at any of the numbers. It's very fast."

While Armani's group continues to refine the tool and its usability, the future of this lightweight, rugged, cheap, and functional tool is uncertain. Armani points out that medical device companies aren't interested in replicating it for clinical use in low-resource settings, since there's no real money to be made. However, she thinks the tool could be useful in labs where people are doing malaria research. Her team is currently doing comparison studies with traditional microscopy smears to gather supporting data for that potential market.

Whether or not the malaria diagnostic reaches a commercial market, Armani is happy that her lab members had an opportunity to use their diverse technical skills to devise a new solution for a practical, real-world problem.

"I really try to recruit students who are excited to explore the unknown," she says. "And that means pushing themselves a little bit, pushing the field a little bit, not being afraid to fail, and knowing that even if you fail you can still learn something from it."

Watch Armani present about the malaria diagnostic at Photonics West 2019.