LightSail 2, launched on 25 June, set out to become the first spacecraft to orbit the Earth propelled by sunlight alone. On 23 July, the diminutive CubeSat unfurled its sail — a thin, silvery mylar sheet about the same size as a boxing ring. What makes this sailing vessel unique, is that instead of relying on wind, it is propelled through space by photons. These particles of light have no mass, but they do have momentum. When photons strike a reflective surface, they bounce off, giving a push to what they ran into.

"We successfully set sail on beams of sunlight," says Bill Nye, CEO of The Planetary Society, a non-profit organization that supports space exploration. "Thanks to our team and our tens of thousands of supporters around the world, the dream started by The Planetary Society's founders more than four decades ago has taken flight."

Astrophysicist Carl Sagan, who co-founded The Planetary Society in 1980, is credited with coming up with the idea of sailing on sunlight. As a guest on The Tonight Show in 1976, he described "solar sailing" to host Johnny Carson with the help of a scale solar sail model. "It works exactly as an ordinary sailboat does," Sagan told Carson. "It can go out from the Sun; it can tack inwards to the Sun. And because it has a constant acceleration, it can get you around the inner part of the Solar System a lot faster and a lot more conveniently than the usual sorts of rocket propulsion." Carson was impressed enough to later serve on the Board of Advisors for The Planetary Society. 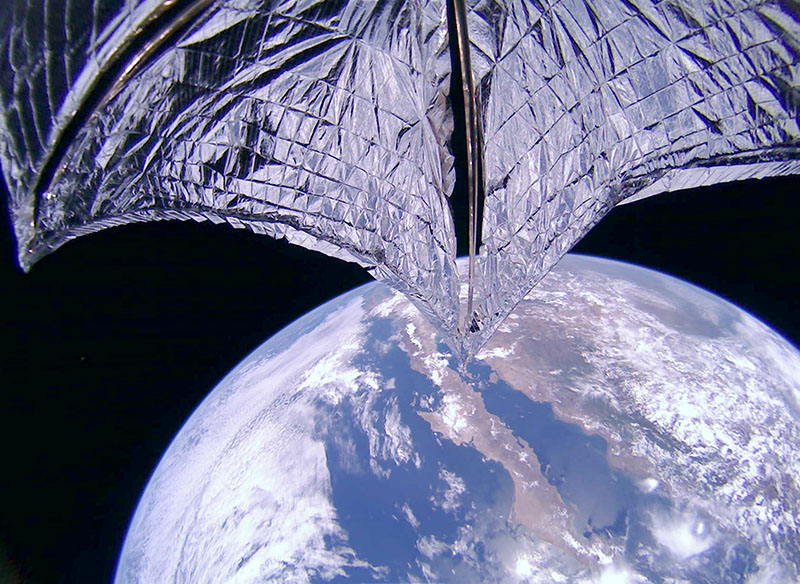 This image was taken during the LightSail 2 sail deployment sequence on 23 July 2019 at 11:48 PDT (18:48 UTC). Baja California and Mexico are visible in the background. LightSail 2's dual 185-degree fisheye camera lenses can each capture more than half of the sail. This image has been de-distorted and color corrected. Credit: The Planetary Society

For the next month or so, LightSail 2 will be twisting its sail back and forth to maintain its flight on sunbeams. As Carl Sagan explained 23 years ago, a solar sail acts like a sailboat in that it pushes, twists, and tacks onto the "wind." LightSail 2 cannot circularize its orbit, so as the Sun's photons push back, the spacecraft's orbit will rise slightly on one side of the Earth and get lower on the other side as it sails around our planet. After about one year of this action, LightSail 2 will pass close enough to the Earth to be pulled into the atmosphere and burn up on descent.

But the goal of the LightSail 2 mission is to demonstrate that solar technology can provide a cost-effective, less-toxic way to propel vehicles through space, which it will have done if all goes well. A solar-powered unit would never run out of fuel; an ideal situation for certain space missions. Solar sail technology could possibly lead to revolutionary advances in interplanetary exploration, and perhaps further.

Verification of radiation pressure on a diffraction grating

Introduction to Photon Science and Technology