Researchers at Los Alamos National Laboratory in New Mexico are in the final stages of completing a very simple, but robust, attitude control system. The new board is a direct heir of research into simulating the nervous systems of real animals using analog electronics, which has produced compelling results.

The first stage of the work involved building electronic "creatures" that crawl, slither, and generally appear extremely realistic. They are so robust that many have survived, interacting in the lab "vivarium" for many years. However, later this year the new technology will truly be put to the test when it is blasted into orbit with the Swedish Hugin satellite.

This field was pioneered by Brosl Hasslacher, Mark Tilden, and their Los Alamos colleagues, when they started to copy simple "nervous networks" from animals such as lobsters, fish, and insects.1,2 Their building blocks were simple analog electronics, sensors, and actuators.

These artificial creatures were not designed to be intelligent in the normal sense. The systems contained no "knowledge" of the world, nor were they equipped to acquire it. Instead, the nervous networks provided a way for the machines to adaptively interact with the world, and the results have been incredibly lifelike (Figure 1). 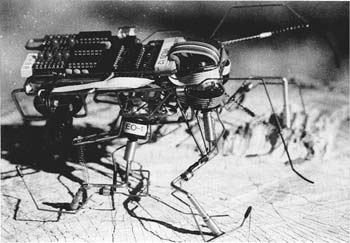 Figure 1. Hasslacher and Tilden's "Lobster," named for the animal on which its neural structure is based. This analog creature is made from just 68 transistors, yet it can learn to walk (from a "cold start") in just three seconds. As well as avoiding obstacles, retreating, and attacking, this machine exhibits 64 different "moods" and has six distinct walking gaits (stop, pace, trot, cantor, pronk, and crabwalk).

The components were connected in a simple-but powerful-design. In the nervous network, the input and output of each actuator (arm, leg, or other moving part) are nonlinearly coupled together. The more force a limb experiences, the more it pushes back. The controller neurons are analog neurons that "fire" (relay signals) that are related to incoming signals by some nonlinear function. The whole system of actuators, sensors, and controllers is designed as a ring structure. As events occur in one part of the circuit, the effects are felt a short time later in all the others.

These networks can be made using very few transistors, capacitors, resistors, etc. (they can be constructed using dozens or fewer), but the creatures' behaviors are very complex. Part of the reason for this is the generation of an internal pattern, or rhythm, that drives the creatures' steps.

These oscillations are useful because they provide creatures, both biological and artificial, a time signature that drives the way they move. In some animals, these are produced by "central pattern generators" located in the spinal cord, and the rhythm is used to allow animals to keep on walking (or flapping or hopping) once they've made the decision to start. Among other things, the central pattern generator is credited with allowing headless chickens to run around.

In the nervous network the central oscillation both drives, and is driven by, the interactions between the sensors, actuators, and environment. As dynamic systems, analog electronics have much more in common with water systems than they do their digital counterparts. In a conventional computer, information is sent around in bits or bytes, which are independent of their neighbors. Each bit or electrical pulse can be dealt with separately. All the control is in the hands of the computer programmer who, directly or indirectly, specifies each operation to be performed on each bit of information. With analog electronics, there is no such thing as an independent piece of information. Everything is coupled together.

Because of this interdependence, there is no reliance on "communication" in the conventional sense. Likewise, complicated "sensor-fusion" algorithms to combine incoming data from different sources are unnecessary. Since all the information is effectively being fed into the same circuit, any "decisions" (movements) the system makes will inherently take all sensor data into account. The effect can be compared to a kind of internal weather system. And because the limbs are connected to the outside world via their actuators and sensors, the environment becomes as important as any internal organ. In a sense, the analog creature does not have to adapt to the outside world: the outside world is directly affecting its inner workings as a matter of course.

From a practical perspective, this blurring of the boundaries between the machine and the world around it makes the electronic creature fast, smart, and very hard to break. Removing a couple of limbs or sensors need not be disastrous; the lack of feedback from that part of the circuit (no push, no push-back) inherently forces the machine to use the resources that are really available.

Initially Hasslacher, Tilden, and their colleagues saw their electronic bodies as sturdy "horses" that could carry other types of artificial intelligence. Even if the AI "rider" was missing, disabled or dead, the machine itself could still survive as long as it was not too badly damaged. However, survival of the machine was not always the main concern, particularly because the creatures were cheap enough to be considered "disposable" for some applications.

A good example of this is a project the researchers carried out at the Yuma proving grounds in Arizona, which is an area that has been littered with mines, missiles, shells, and bombs since the 1940s. In order to clear that section of desert of unexploded ordinance (UXO), they designed many different types of "biomechs" (their term) to detect and gather this dangerous refuse. It was a particularly challenging test because of the extreme conditions: the temperature could get as high as 165 deg. F during the day, down to freezing at night, the nominal humidity was 80 percent and the air was full of dust. Not to mention the real creatures -- such as snakes and scorpions -- that the machines would have to deal with.

The experiment was not entirely successful, in that the machines tended not to "live" very long, but the fact that they could survive at all and detect and gather some of the UXO was encouraging. Particularly interesting was a machine they dubbed the "ground pounder," whose sole job was to trigger buried mines to explode.

Figure 2. This simple neural network circuit allows the analog sensors to directly control their motor, thus forcing it to turn and "lock" onto an infrared target.
Sensing victory

Though the robotics work continues, another line of research that has been fruitful has been that of a simpler kind of sensor-actuator coupling. This has been pursued by Tilden with colleagues Janette Frigo and Kurt Moore.3,4

In one experiment, the nervous network idea was adapted to allow infrared tracking using two sensors coupled to a motor (see Figure 2). Each sensor is connected to a neuron that has natural oscillation, the time constant of which is modulated by the photocurrent. As the latter increases, the on-time duty cycle of the neuron decreases. This means that more power is diverted to moving the actuator in the direction of that sensor. This continues until both sensors see the same brightness of target (they have "locked" onto it) and the system stops moving.

The latest incarnation of this kind of technology is to be incorporated into the Hugin satellite, due to be launched on 15 August. The main body of this craft was designed by the Swedish Institute of Space Physics and is identical to their Munin craft. However, the control systems for Hugin have been designed at the Royal Institute of Technology, Stockholm, with a heavy emphasis on nonstandard technologies such as neural networks.

In Hugin, 12 photodiodes will initially be used to detect UV radiation from the sun in order to monitor the orientation of the spacecraft. The photodiodes will simply represent a source of information for the main controller via an analog-to-digital converter. However, the sensor circuit is also equipped with torque coil actuators and controllers, so it can be used as a backup attitude-control system. This is a crucial job because the satellite relies on solar power to keep its batteries charged -- which means the solar cells must always be facing the sun.

If the experiment is successful, engineers may more frequently consider using cheap, robust, and specialized analog systems that can take over if their all-purpose computer controllers fail.