In the quest for ever-smaller lithographic feature sizes, researchers have attempted to use radiation with increasingly shorter wavelengths. Visible light gives way to ultraviolet, x rays, and electron beams to pattern various materials. But lithography of this type has its disadvantages: it is usually dependent on two chemical reactions taking place in the material being patterned. The first involves some sort of chemical change when the energy is absorbed; the second on the alteration being exploited via some kind of etching process (where either the modified or unmodified areas are removed). These chemical mechanisms are statistical in nature and essentially diffuse the sharp features contained in the original energy beam.

NEC and Univ. of Tokyo researchers have been looking at a different approach to this problem, which involves combining the deposition and patterning of a material into one process.1 The technique uses holography to impart a pattern directly onto the atoms that are forming a new layer on the substrate. Because atoms are massive they have a relatively small de Broglie wavelength of just a few nanometers, so the feature sizes should also be very small -- at least theoretically. In addition, because there is no chemistry needed to transfer the pattern from the energy to matter distribution (the matter has already been distributed), there is at least one less obstacle in the way of reaching this ideal.

Figure 1. Neon atoms are trapped and cooled so they can be released to produce a reasonably coherent beam. This is diffracted by a computer-generated hologram and the image reconstruction is detected using a microchannel plate detector. 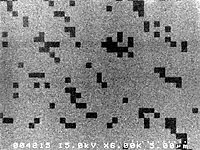 Figure 2. Scanning electron microscope image of an SiN membrane hologram. The black areas are holes and go right through the material.

The basic setup for this atomic beam holography is shown in Figure 1. Metastable neon atoms are produced by dc plasma discharge and introduced to magneto-optic trap via a Zeeman slower. The trapping and cooling of the atoms are necessary in order to produce a beam that is coherent enough to interfere after diffracting through the hologram. Once the neon has been laser-cooled to an ultra-low temperature, atoms are released using a second laser. The resulting atomic beam has a wavelength of just 7.1 nm, and this is diffracted by a hologram. In this experiment, rather than being deposited, the patterned atoms are caught using a microchannel plate detector.

The hologram is computer generated and includes lens elements to compensate for the fact that the atoms come from a finite source (among other things). The hologram pattern is created using an electron beam on photoresist and CF4 to etch all the way through. The result was a thin SiN membrane hologram, supported by an Si window in the experiment (see Figure 2).

Figure 3. Reconstructed pattern of Juliano de Medici from a hologram made up of 1024 X 1024 pixels and an original image that contained eight grey-levels.

An example of one of the most recent results is shown in Figure 3. This was achieved using gray-level holography (where the gray level refers to the image, not the hologram), which researchers see as being more useful for producing layers that are more complex 3D surfaces. According to the team, lead by Jun-ichi Fujita, it takes almost no additional calculation to produce a gray-level hologram than it does to produce one that is just black and white. To increase the intensity of the image, researchers tiled 16 holograms, with phase shifts between them to make the reconstructions coincide. Reading out the image took more than two hours and 6 X 106 atoms were accumulated in total.

Unfortunately, because of the nature of the current experiments, the best resolution is not very impressive (65 µm), which is determined by the multichannel detector. Also, the relatively low coherence of the atomic beam has proved to be inadequate. This coherence is determined by the velocity spread of the trapped atoms (here 26 cm s-1): the more uniform the velocity among atoms, the more the behavior of each one will match that of the others once launched by the release beam. In the Tokyo experiments, the relative velocity spread was about 1/300, which researchers say could be reduced to below 10-4 if the sample could be cooled down below 1 µK. However, they are optimistic about the future and look forward to the atomic laser making atomic beam holography more practical.